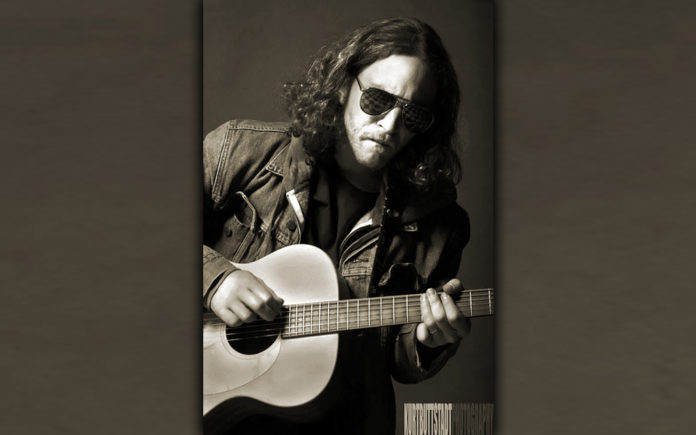 Vinny Berry arrived in the Coachella Valley this past September from Lake Tahoe.

The first time I saw Berry perform was last month at JCs Patio Cafe in Palm Desert and I was blown away with his vocal control performing in such an intimate crowd and having the chops of a rock n roll frontman. I appreciated the way he was able to pull back when needed and the crowd was putty in his hands. Every now and then an artist comes along that really impresses me beyond words and Berry is one of them.

Berry landed in LA around 8 years old after moving around as a Navy brat. He fell into becoming an actor being as he always liked entertaining even at a very young age. (Check out his IMDB page under Vincent Berry).

He joined his first band around age 13 (punk band called Darwin’s Monkey Trial) and played his first gig at the Cobalt Cafe in Canoga Park. “I played in numerous bands through high school into my early 20’s performing at The Whiskey, The Key Club, The Rainbow Bar and Grill and the Pig n Whistle,” shared Berry, during a recent interview.

He moved to Lake Tahoe in 2010 with his wife to get away from the city. “I started playing solo gigs at restaurants and started to really hone my craft. I formed a solid band up there that we eventually called Mother Stingray after a legal dispute over our original name ‘Strange Weather.’ We played a lot up and down CA and had a lot of fun. We relocated to Ventura, CA as a band and after a year the lead guitar player/songwriter and drummer wanted to move back to Tahoe,” shared Berry.

He started working a high level corporate sales job that he excelled at, but something was missing. Music! “After a year (summer of 2018) my wife and I decided to start fresh in the desert where she can pursue her graduate degree in social work and I can get back to what I love. We really love it out here so far. Wide open spaces are a great place to think. People are nice and laid back. We may end up here permanently,” shared Berry. 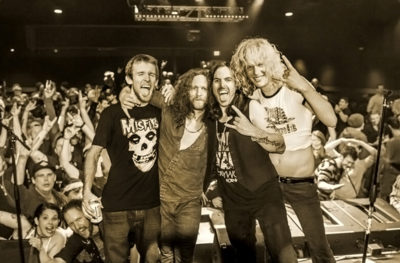 He says he’s trying to avoid day jobs as much as possible (with a laugh). “I made a living in Lake Tahoe playing solo gigs while pursuing other creative projects, and I plan on doing that down here as well. I love playing music period. The solo cover gigs are great for paying the bills and I do really enjoy doing that because I try to put myself in (almost) every song I sing as to give it a certain sincerity that I crave when listening to singers. My ultimate dream is to be a front man of a rock band (which is Mother Stingray), but like I said before I am happy to make a living playing music. Original solo gigs are great because I love soft melodic acoustic tunes just as much as kick ass rock n’ roll.”

Mother Stingray’s first gig was June of 2015 as Strange Weather at the Himmel Haus in Lake Tahoe CA. Mother Stingray has had 2 full length albums. The first one got pulled off iTunes because of the name dispute, but there are some hard copies still floating around.  “Some songs were recorded after something like 5 rehearsals so it’s probably better that way,” Berry said with a chuckle.

Mother Stingray released the second album Halloween 2018. I was fortunate enough to get a copy of that CD and I have to say these guys kick ass. “I have never officially released a solo record, but I plan to do so next year as I have a ton of demos,” shared Berry.

Mother Stingray does not have any shows currently scheduled as they are looking forward to the buzz from the album dropping and being able to jump on tour with a national act. I have no doubt that this is in the cards for this band.

“One of the most exciting parts of my musical career was playing a headline gig with Mother Stingray at ‘Vinyl’ inside the Hard Rock Hotel and Casino in Lake Take to 400 fans (max capacity.) It was so much fun, the crowd was insane, the sound was great and we played for like over 2 hours. I love playing a good rock show,” shared Berry.

His influences range anywhere from Joni Mitchell to the Misfits and anything in between. A few main ones are the Beatles, Free, Led Zeppelin, Jeff Buckley, Don Mclean, X and Pearl Jam.

“New bands are a huge influence on me as well such as Rival Sons, Highly Suspect, Royal Blood, Beware of Darkness and Graveyard,” shared Berry.

I got to see his love of Highly Suspect, who is also my new favorite band that played Coachella this year, when I went to see him two nights after the first show at JCs, at Desert Fox Bar in Palm Desert. Berry performed three Highly Suspect songs and delivered them with impeccable precision and passion. I was beyond impressed.

“I respect good people in the music business, people who put the art above everything. I respect people in the music business that go against the stereotypes of being fucked up and take care of themselves and improve their art for it. I think it is respectable when people use their talent for good causes as well. I think Eddie Vedder is a great example of that,” shared Berry.

I asked who he would most like to open for and wasn’t surprised by his answer.

“I would love to open for Pearl Jam for sure. Mother Stingray would be a great opener for Aerosmith also. I love Steven Tyler. Guns n Roses would be rad too! My songwriting partner and lead guitar player “Chili” would be stoked!” 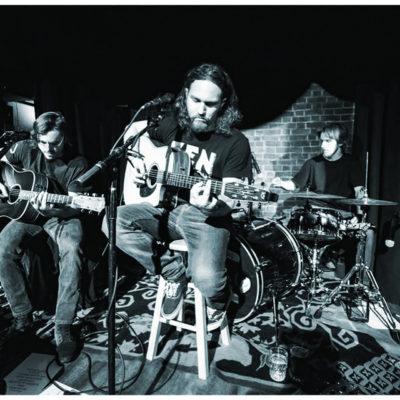 “Chili and I do most of the writing for Mother Stingray. It usually starts with a melody and goes from there until it’s been hammered into our subconscious. When I write solo it usually starts with a chord progression on acoustic until I develop a melody for a verse and chorus and then I tweak it until its finished, or record it on a voice memo on my phone and come back to it if the rest of the song is not coming to me. I guess I’m a bit old school and new school,” Berry said laughing.

Berry is truly a remarkable performer regardless of whether he’s doing covers or his original music. He has a wide range of cover material that ran the gambit from Neil Young to Tom Waits, Elton John, Janis Joplin, Pearl Jam, and of course those Highly Suspect songs.

Berry is one cool dude, both humble and chock full of outstanding vocal talent. The desert is lucky to have him, let’s hope he decides to call it his home. Don’t take my word for it go check him out for yourself.

The Mother Stingray album is now available on iTunes and Spotify