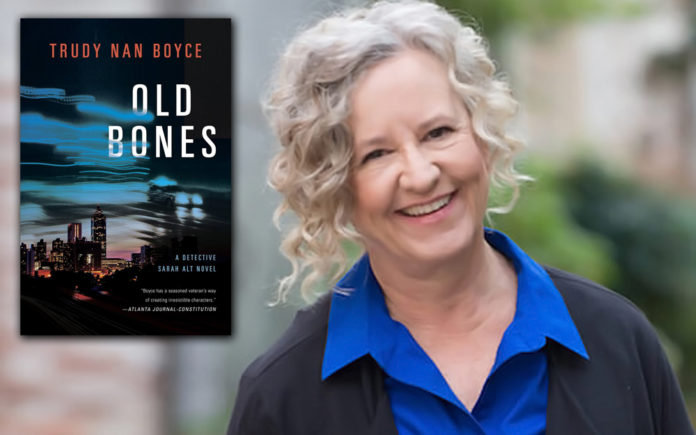 There is a list of innocent black men who have been shot to death by white police officers. Whether the killings are a result of fear, anger, hostility, resentment, arrogance, lack of training, incompetence or flat-out racism, there is a problem in this country. Nan Boyce’s Old Bones: A Detective Sarah Alt Novel (Putnam, 339 pages) is about a character at the center of racism and policing.

Old Bones is the second installment for the protagonist Sarah Alt, also known as “Salt.” Working in Atlanta, Georgia, she is a second-generation Southern cop.

Recently promoted to homicide detective, Salt’s first body turns out to be someone she knew back when she was a beat cop. The bones belong to 14-year-old Mary whom Salt sent to a juvenile detention center a few years earlier. The body was found buried in a park. Salt takes the demise of the teen personally.

Meanwhile, the Atlanta police department is on high alert. A black women’s college held a peaceful “Black Lives Matter” protest where a truck flying the stars and bars, shot into the crowd, killing two girls and injuring more.

When all units are called to the scene, Salt comes directly into contact with the racists hicks who then shoot at her! Salt takes cover and returns fire but the men get away.

As Salt works the dead girl’s case, she reenters her old beat and once again finds herself caught up with “The Homes” gang of thugs and criminals. Some have become more powerful and others have moved up the ranks.

The community itself is being torn down and the residents are forced out with no where to go, complicating Salt’s investigation. At one point, the detectives are called to a demolition site where a mass grave has been uncovered. These old bones are identified as the remains of slaves.

When the entire police force is put on riot control, Salt finds herself caught up in a violent race war and a political quagmire.

As her work life becomes more intense, so does her personal life.

After shooting at the redneck racists, she is required to get a mental health evaluation, which brings up her many ghosts. Her father committed suicide on her birthday. Her boyfriend, also a detective, wants her to move from her childhood home where she discovers her family’s own past with racism.

Author Nan Boyce has a doctorate in community counseling and is a former police officer and homicide detective with the City of Atlanta. Nan Boyce’s background should make this novel a very gritty and honest portrayal of racial tension in one of the country’s largest integrated cities.

There are moments when the story starts to deal with the issues between police and minorities – the black community to be specific. Two of the characters try to understand the tense relationship between the lawman and black man. But we never get any particular insight. Does it harken back to slavery, as one character suggests?

It was easy for the characters to sum up the white shooters as dim-witted, uneducated and high — as if that is an excuse for shooting innocent black protestors.

Most of the detective novels that have a franchise character can stand on their own whether you have read the first or fifteenth outing. But this is the first time I really felt I was missing something about the protagonist that could have made me understand her better. I did like that Salt is brave and willing to take risks.

However, the homicide detectives wear fedoras, which is an image that strikes me as odd. And Salt also wears her father’s old raincoat – a funky look for a modern female detective.

But besides the attire, I wanted more of the minor characters and the dilemma of their everyday lives in the hood. I found them the most fascinating as they struggled against a system that is not only dangerous, but also puts them at a distinct disadvantage. I was rooting for Mary’s brother – gangster Lil D – and his family.

A conversation about black lives and the police violence against them is absolutely necessary. And I was hoping this book would address the relationship and why it seems so out of control.

Tamir Rice, Michael Brown, Trayvon Martin, Eric Garner, Terence Crutcher, Philando Castile are all victims of police shootings. But what are they really victims of?

As one black officer says: “Cops have become symbols of the problems. Those incidents didn’t start when cops came in contact with those black men. The incidents had their roots in slavery, Jim Crow, and the legacies of poverty and systemic racism. If the outrage becomes only about police reform, then the system will not change, only the cops.”

Clearly, there is much more to be done.