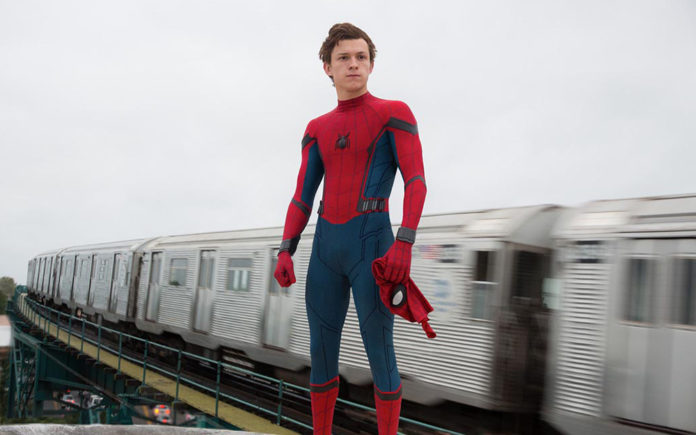 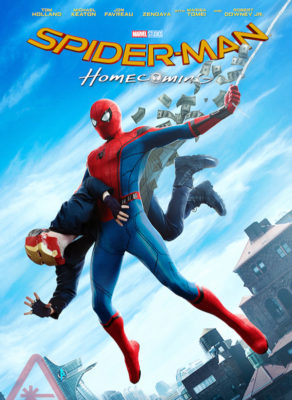 In this fun, colorful reboot — or resurrection — a young Peter Parker/Spider-Man (Tom Holland), who made his sensational debut in Captain America: Civil War, discovers challenges and opportunities in his newfound identity as the web-slinging super hero without getting sidetracked with corporate studio concerns like revealing unnecessary details of the vast Marvel Comic Universe solely for future franchise opportunities. Here, story still counts for something. And that’s very good news that makes this outing easy for fans and those new to Spider-man’s world (yes, they exist).

Still exhilarated by his exciting experience with the Avengers, Peter returns home, where he lives with his Aunt May (Marisa Tomei), under the watchful eye of his new mentor Tony Stark (Robert Downey, Jr.). Naturally, Peter falls back into his normal daily routine–distracted by thoughts of proving himself to be more than just your friendly neighborhood Spider-Man — but when the Vulture (!) (Michael Keaton) emerges as a new villain, everything that Peter holds most dear is suddenly threatened.

What’s especially amazing is how this movie totally captures and encapsulates what makes each of the varied and distinctive characters tick and how each is supported and backed up by an incredible performance from the young Tom Holland.

When all is said and done, one of the pleasures of this film is how great ensemble cast seamlessly interweaves their onscreen characters into the rest of the beautifully rendered cinematic universe.

The audience I saw this with cheered and laughed out loud many times, clearly enjoying this colorful, light reboot that has heart, humor and eye-popping action. Loved the solid depiction of Spider-Man as a kid learning the ropes. This is the way to do an origin story without rehashing his origins yet again. The audience laughed out loud many times.

I was starting to weary of the franchise, but now I’m glad “they” are doing it right. I was afraid they’re just out to make a buck like Sony was doing with the Andrew Garfield reboot, but am relieved someone cares about the character and the story.

This is Marvel bringing their original flagship hero back into the fold. Homecoming is an appropriate title.

NEW BLU FOR THE HOME THEATER:
THE LOST CITY OF Z 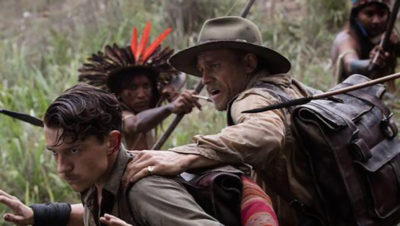 (Charlie Hunnam), who journeyed into the Amazon at the turn of the 20th century in an attempt to document what he believed to be compelling evidence of a previously unknown, advanced civilization. Supported by his devoted and patient wife (Sienna Miller), son (Tom Holland) and aide-de-camp (Robert Pattinson) — Fawcett returns time and again to his beloved jungle in search of the lost city. What he discovered radically altered our misconceptions about ancient history and the flow of civilizations dominated by western white men. This lush, transcendent film is as much about obsession and perhaps madness as it is about courage, passion, adventure and exploration. If you couldn’t put down the gripping bestselling book by David Grann, the movie adaptation will not disappoint.

Fawcett made world headlines when he disappeared in the Amazon while searching for a mysterious city. For a nearly a hundred years, his name was synonymous as a symbol of lost causes based on foolish notions. This grand-scaled classic filmmaking adventure is a tribute to our fundamental human exploratory spirit and our persistent “need to know.”

BEAUTY AND THE BEAST 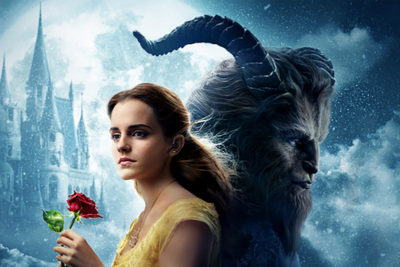 Director Bill Condon’s live-action fairy tale based on Disney‘s 1991 animated hit is, as almost everyone on the planet knows, about a cursed prince – now a beast — whose castle becomes a prison to a pretty young maiden. Going in, we know it’s only a matter of time until she sees beyond the creature’s gnarly and off-putting appearance and discovers he has a heart of gold that unexpectedly triggers in the girl feelings of love. Not really a big surprise, right? Perfectly cast Emma Watson and Dan Stevens are the challenged lovers.

Fans of Disney’s original version may feel a let down, but the tunes remain the same (if a bit overblown and distracting) as do many of the shot sequences.

I wish someone could tell me what this movie is really about? Are the “Beast,” Bella and Gaston archetypal characters or did I miss something? Is there a metatheme unfolding? Is it about something more than the simplistic axiom “appearances can be deceiving?

Beautiful production design sometimes overwhelms the oddly muted plot points. The longish movie can become a bit of a slog at times. Disney’s live-action Cinderella and Jungle Book raised the bar very high for the studio’s remakes of their beloved animated titles. But it is clear to me that just because a director is known to be a life-long fan of show tunes and Broadway musicals, he may not be skilled enough to do justice to this complicated old love story.