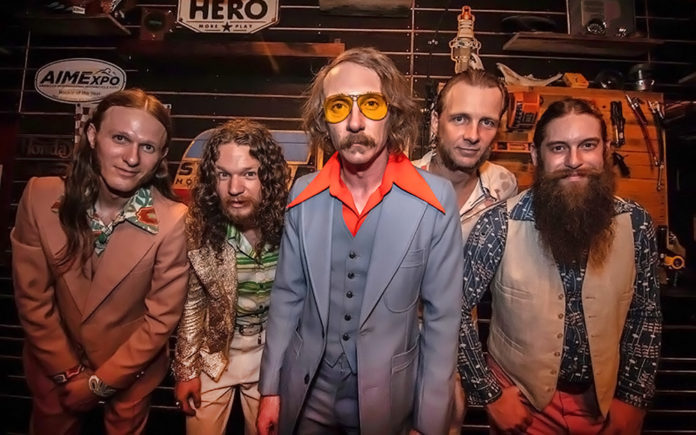 Black Magic Flower Power will be performing at The Hood Bar & Pizza on Saturday, April 6, 2019 with desert dwellers WAXY as they continue their trek across the United States in support of their ‘Retro Psychedelic Quality Boogie Rock’. Their only available song, “Funky Town Sex Machine,” is what you would expect with a title like that. It incorporates all that is danceable with the funkiest portions of stoner rock available. I was able to talk to their courageous conductor, Dustin, who, along with the band now reside in Tucson planting their brand of rock in the Arizona desert until the hipsters water that down too!

CVW: What’s your sentiment about your return to the desert?

Dustin: “We’re super-stoked about getting back to the desert. It’s a second home to me. I’m very excited to keep it alive there. The scene is so up and down. I try to make a point to pop in and add my two cents.”

CVW: You have some unique and long-standing desert connections.

Dustin: “I did a record there with Brant Bjork, I spent about a month total there, living there hanging out, and out playing shows and as a kid popping in, this is like twenty something years ago. I pop in and feel the vibe; I’ve played a gig with Fatso Jetson there, Waxy. It’s just kind of being such a follower of that scene as a youth before this shit was hip I was going there way back in the day to just feel the energy, I did a tour with Vista Chino, I’ve got the meat. Everyone, all the old timers, to a bunch of Brant’s old band members who I really appreciate, that’s my tie there, I’ve always felt the scene is open arms to us.”

CVW: Stoner rock and the “desert music scene” has expanded globally since the early 90’s when Kyuss reigned. Trying to keep the music wholesome seems to be a main goal for many of the artists who began their careers at that time.

Dustin: “It’s a very neat scene and I have a lot of respect for it. Maybe you’ll detect a little bitterness in me now. The scene has become so hipster that it kinda puts a weird taste in my mouth. I try not to talk like that but how did this all happen? I’m glad the desert is getting attention but I think only a small percent really understand what it was all about because it’s not just about Kyuss and Black Sabbath you know, like heavy blues, it was about the earthlings?, Fatso…weird music, it was about a kind of freedom; how I always looked at the desert scene, it was psychedelic.”

CVW: I believe in what you’re alluding to. The diversity is immense if you see the “desert music scene” in its entirety.

Dustin: “I have such a large record collection from there and nothing sounds the same, the new hipsters have kind of made it one thing and that always rubs me the wrong way. It’s not just this one sound. If you listen to Brant’s early records like Local Angel, basically, it’s like an acoustic record, the early The Desert Sessions, there’s a bunch of weird-ass-shit on there, I try to look at the big picture of what was produced versus this little microscope with Kyuss. I’m a huge Fatso Jetson fan, I never hear anyone fuckin’ talk about them. It always kinda blows my mind. ‘Boomer’ was the real Godfather of the scene but he barely gets mentioned. That song, “Light Yourself On Fire,” is one of the best songs ever written! I remember when that song came out and I found it, I think I listened to it 100 times in a row, this is like a perfect song and then I go to my distro in L.A. and Mario Lalli works there, I’m like WOW, it kinda blows me away. I’ve done shows with Yawning Man in Canada, I run into everyone in the scene. I know Cherish Stevenson, we play Cherry Cola’s Rock ‘n’ Rolla Cabaret & Lounge all the time, we’re real tight with Jesse Hughes, we stay at his house every time we’re in LA, we’re kinda in with those guys as outsiders.”

CVW: Tell me the hypothesis behind Black Magic Flower Power. 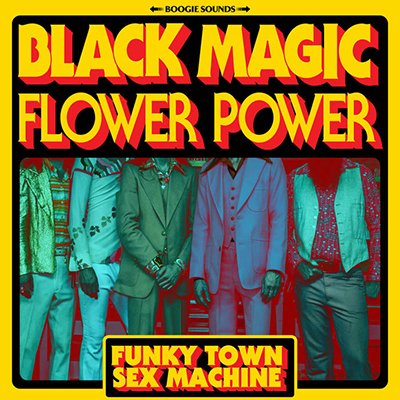 Dustin: “It’s a new project. A lot of people think it’s a band name change. It’s a brand new project. It happened naturally. I began to write differently it made a lot of sense to start fresh. What I’m doing now is kinda like Stoner Disco. There’s a lot of influences in it, you can still hear the psychedelic, but I think it’s desert, it’s all kinda mashed together, I’m using tons of funk elements, dance elements and still poppy melodies its Boogie Rock man. It’s very dancy. I did a show with House of Broken Promises in Vegas and they related what we were doing to Brant’s music, even though I think it’s a little more dancy. It’s like Brant Bjork and the Operators but a little more disco. A hard disco operators vibe happening. Over the last 30 years of music, I’ve been growing into this. It’s all connected. It was so natural when I just started writing in this vibe. This is what I’ve been looking for. This is still super-stonery but it gets you head bobbin’ and your hips bobbin’ and I’m like, oh, this is cool. And when you study old funk, the underground funk scene, from the late 60’s the early 70’s, it is very reminiscent of the whole underground stoner rock scene that happened, it was hippy, psychedelic, just people that like to have a good time.”

CVW: You’ve gone as far as to seek a new environment to root the band.

Dustin: “We’re based in Tucson, Arizona. New project, new town. We’re in the desert now ourselves and a lot closer to the Coachella Valley. I chose Tucson because it’s a little higher elevation, not quite as hot. I look at Joshua Tree over the years and I thought about moving there but it was getting a little hip and I was trying to avoid hipsters, they kind of rub me the wrong way. We all moved. Portland got super hip. I love Portland and I love the Northwest but when things get hip I think the writers and creatives say it’s time to go exploring somewhere else and that’s what I’m doing with the geographical move and the new project. The stoner scene is very saturated now, I just want to do a hard branch-off, and it seems like the scene is still keeping us intertwined with it, so hopefully this new project is an inspiration simultaneously. It’s a lot bigger genre than just the blues scale.”

CVW: What are your plans the rest of the year with touring and new music?

CVW: I don’t see band names anywhere on-line. With a name like Black Magic Flower Power who needs names right? Tell us about your band.

Dustin: “They have big smiles on their faces all the time. They’re fucking killer musicians and I wouldn’t be able to do this without them. I’ve been with my guitar player for 13 years, my drummer is coming up on ten years. We’ve been through many projects together. The other two dudes I’ve been with at least 6 years now. We’ve been a family for 6 or 7 years now with the same line-up so it’s been cool.”

CVW: There’s a whole back-story to this band that we’ll avoid for now but you have turned really fine wine into nectar of the stoner gods my friend.

Dustin: “This project was caused by negativity from a certain group and we are super positive and super fun because of it. I’m gonna write the funnest happiest music I can now. The response has been super-killer. Monster Magnet came out to a show in Kearney, Nebraska. They had a day off after playing Omaha, and came to see us. They said they had been trying to catch us for so long. They were into it; they were digging the new vibe. Everyone is kind of digging it. It’s neat to be moving forward and the peers I really respect are telling us we’re on to something pretty cool. It’s been a long time coming. We’re getting older and little more mature in finding what I’ve been looking for as a writer. I’m pretty stoked on it.”

CVW: You’re performing with our mutual friend Robbie Waldman and his band Waxy.

Dustin: “I’ve known Robbie for a long time. He’s another connection to the scene we have. He’s a big part of the community.”

CVW: Tell us about long-term plans for BMFP.

Dustin: “We talked to Brant about getting on his fest next year so hopefully that will happen. We’ve done London and Berlin Desertfest before and we are looking forward to returning. People hit us up all the time to get back to Europe. We just talked to John Gist and he’s doing as much as he can in the Vegas scene so we’ll be hitting there as well. I love the community and I like that everyone is really trying to keep rock and roll alive, that’s the most important thing. We’re just passing on a language for the younger generation, we can’t let this shit die or its game over.”