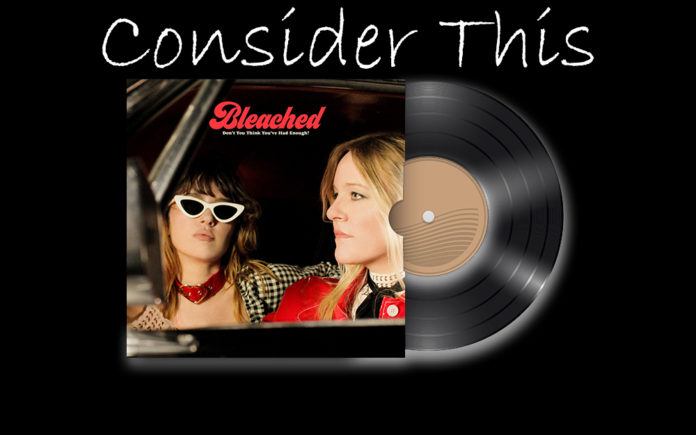 “Yeah, I know how this ends-and I’d watch it again every loss and every win/through the growing pains-and the awkward phase-from the Valley to L.A.” That’s Bleached, sharing a bit of their origin story on their newest record, Don’t You Think You’ve Had Enough?

Third albums are tricky, an artist, or band has their whole life to write and record their debut, effectively shooting their (creative) wad. A sophomore album simultaneously refines a sound or gets the kinks out. Most often a third record is make-or-break time.

When Blondie arrived in the late ‘70s, their first two albums made some noise, wrapping Girl Group harmonies around a Punk Rock attitude. But it was their third effort, Parallel Lines, that hit the jackpot, both critically and commercially. The same is true for Elvis Costello. The cognoscenti dubbed his debut a classic, and his second record was streamlined and stripped-down. But it was his third, Armed Forces, that felt like a revelation. While Blondie fanned the dying embers of Disco, without inflaming their Punk fans, Elvis cautiously embraced the day-glo technicolor of New Wave. Bleached has managed the same feat on their third effort, Don’t You Think You’ve Had Enough.

The members of Bleached have known each other their whole lives as they are sisters, Jennifer and Jessica Clavin. Growing up in the San Fernando Valley, they became obsessed with Punk Rock early on. They soaked up the anarchic sounds of the Ramones, the Misfits, the Germs, and the Gun Club. Their parents, Linda and John, were completely supportive offering endless encouragement and guitars.

By their early teens the girls were taking the bus into Hollywood on a weekly basis and becoming habitues of The Smell. The all-ages venue, located in downtown L.A. provided a safe space for kids already enthralled by the DIY danger of Punk. The girls were immediately influenced, seeing bands like Abe Vigoda and No Age on stage. When Jen was 19 and Jess was 15, they joined their first band.

As part of the distaff five-piece, Mika Miko, they played a series of West Coast and national tours, sharing stages with bands like the Gossip and Black Lips. They released a series of 7” singles before signing with the Kill Rock Stars label in 2006. That year they issued an official long-player, C.Y.S.L.A.B.F. By 2009, the band had called it quits.

At this point, the sisters took a break from each other, creatively speaking. Jen moved to New York to study fashion, and Jess stayed busy in L.A. playing with local favorites, Cold Shower. Still, the pair continued to write songs together, even though the collaboration was long distance. When Jen returned to the Golden State in 2011, the siblings reinvented themselves as Bleached.

Bleached released a series of well-received singles, through a variety of obscure labels before signing with Dead Oceans Records. Their full-length debut, Ride Your Heart arrived in early 2013. A sharp synthesis of Punk and Pop, wrapped in shimmery Girl Group harmonies, it felt like an instant summer classic. Critical acclaim was immediate and the album peaked at #18 on Billboard’s Top Heatseeker chart.

Relentless touring and the constant temptations of living in L.A. made it difficult for Bleached to begin writing their second record, so the sisters retreated to a remote cabin in Joshua Tree where there were less distractions and minimal cell phone reception. In the quieter environment they managed to knock out 30 new songs.

Returning to the studio with producers Carlos de la Garza and Joe Chiccarelli, they pared down to 10 essential tracks, which became their second Album, Welcome The Worms. Released in 2016, it expanded their horizons, adding new switchbacks and contours to their sound, while remaining true to their primitive influences. Critics remained impressed and their fan-base increased.

Of course, when the girls began making music for a living, they fully embraced the Rock N’ Roll lifestyle, and all of its trappings. Maybe they didn’t exactly Party like it was 1999, or achieve Go-Go’s heights of debauchery, but they had a good time. During the run-up to Welcome…, Jennifer decided to quit drinking. At first, Jessica continued to imbibe and it created a bit of separation for the sisters, whose bond has always seemed symbiotic. Wisely, Jennifer refrained from proselytizing.

Several months later Jessica decided give up alcohol as well. Back in sync, the pair began hitting their practice space on a daily basis, rain or shine, from noon to six. This newfound sense of clarity and discipline informed the songs that ultimately wound up on Don’t You Think You’ve Had Enough.

The record’s first three tracks effortlessly hopscotch from one style to the next, confirming the sisters’ diligent woodshedding has really paid off. “Heartbeat Away” kicks it off, low-slung riff-age connects with slashing power chords, wiry bass and a punishing beat. Wry lyrics celebrate their hard-won success while simultaneously casting an affectionate backward glance at their humble beginnings; “I crawled my way to the top of the hill, but man I long for the valley still, the sweet below is all I’ve known, but it’s only a heartbeat away.” The sunny, see-saw shapeshifts on the bridge, as the girls affect a lush and dreamy Fleetwood Mac-y vibe, acknowledging commitment to a sober reality happens one day at a time; “I could go back to the way it was, all it would take is a slip in the mud…” before returning to the pounding chorus and a scabrous outro.

“Hard To Kill” opens with an insistent whistle-y refrain that threatens to get all Peter, Bjorn & John-ish on our asses before it’s sideswiped by a four-on-the-floor Disco beat, sinewy guitars Squiggly synths and spidery bass lines. Taking a page from Debbie Harry’s Playbook, the icy vocals convey a cool remove that belies playful lyrics that winkingly reference the Cure; “Cuz Friday, I’m in Love,” and revisit their misspent youth. Propulsive cowbell is layered in (and who amongst us can resist a cowbell), as the arrangement takes an angst-y left turn into Talking Heads territory.

Although the title “Daydream” hints at a Shoegaze-y sound, down-tuned electric guitar, vroom-y synths, handclaps, roiling bass and a stompy beat say otherwise. Exploding like a Charms Blow-Pop, the song is chockablock with chewy goodness. Pining for an ex, the lyrics catalogue regrets; “Stuck inside a daydream again, write you a song I’ll never share, send you a message to see if you care/What a disgrace, what a mistake, it’s caught in a haze of yesterday, I fucked up, this was just a phase.” By adding a blast of fuzzed-out guitar and a few “ah-uh-ahs” the self-pity is magically washed away.

Bleached continues to pledge allegiance to ‘80s New Wave on both “Somebody Dial 911” and “Silly Girl.” The former manages to capture the gauzy angularity that was a trademark for both the Psychedelic Furs and the Cure. The melody is anchored by sleek guitars, tinkling bells, kaleidoscopic keys and a galloping gait. The lyrics equate the highs and lows of instant attraction to chemical dependence; “You’re more fun to be around, higher than the clouds, nod out on the couch, saying such sweet things to me, when you’re swimming in dopamine…somebody dial 911 before I fall in love, we better hide the drugs I think I’ve had enough.”

On the latter, poppy synths partner with static-y guitars, waspish bass and a whip-smart rhythm. The arrangement lands somewhere between the intellectual angst of ‘til tuesday and the Jungian pulse of Tears For Fears. The confrontational lyrics pull no punches, “Playing like you’re clean, but your eyes are telling me, calling at 5am, crawling, seeing things again…don’t you think you’ve had enough?”

To quote Elvis Costello, the best tracks here walk the line “between tenderness and brute force.” The lyrical self-aggrandizement of “I Get What I Need” is matched by prickly electric riffs, strutting bass lines and a rat-a-tat beat. Crackling with electricity, the sing-a-long, shout-it-out chorus, nearly obscures the admission of “I lie to get what I need.”

Tensile guitar licks ricochet through rubbery bass and a walloping back-beat on “Rebound City” Toxic exes are categorized and dismissed; “Tommy was an accident, Billy, I got a bit obsessed, Travis was a psychopath.” (Wait, was his last name Bickle?) The guitar solo ascends like Icarus, but pulls out before the obligatory crash and burn.

On “Kiss You Goodbye” we-are-Siamese-if-you-please guitars sparkle and fade over prowling bass lines and a syncopated 4/4 beat. A necessary break-up is nearly hampered by public opinion; “Tell your friends I’m not like what they say, and maybe we’ll meet again someday, searching for the words trying to make everything ok/Tell me it’s not worth the pain, baby we’re a hurricane.” The instrumental break is all whooshy synths and splattery guitars, before noting “feeling so alive, cuz some things are meant to die.”

On the aforementioned “Valley To L.A.” Girl Group gravitas meets Bubblegum Crunch. A wash of keys collide with jangly guitars, popping bass lines and a snapback beat. The lyrics sketch out a vivid portrait of the artists as young (wo)men, (with apologies to James Joyce); “Through the gray and decay of this beautiful place” the sisters’ warmly recall when the band Operation Ivy was their drug of choice, backyard parties, Punks with mohawks, hitching over the hill for shows at the Glass House and their own nascent attempts at performing

Other interesting songs include the sharply spiky “Awkward Phase,” which recalls the bygone era of No Doubt crop-tops, disposable cameras and kissing with braces. “Real Life” weds corrosive guitars to an insistent handclap beat, and contains this sagacious phrase; “I don’t want to give up all the stupid things that make me me.” The album closes with “Shitty Ballet.”

Here, coiled acoustic riffs pool and eddy around the sisters’ beatific harmonies, halfway through, the song explodes, ratcheting up the tension and tempo adding shuddery electric guitar and pummeling drums. The lyrics excoriate an unfaithful partner, insisting “Don’t wanna pretend it’s okay when it’s not.” As the arrangement collapses in on itself, the poopy pas de deux is complete. It’s a fractious end to a dazzling record.

Jennifer and Jessica handled all the instrumentation themselves, playing guitar, bass, keys and synths. They relied on Spencer Lere to provide drums and percussion. This is their most assured record to date, Punky and Power Pop-y in all the right places, adding hints of sophistication and introspection. With clear eyes (and full hearts), they evoke their younger years, assessing the fumbles, foibles, triumphs, tragedies and milestones. Ultimately, they realize, they wouldn’t change a thing. The Clavin sisters are all grown up, but they aren’t done having Fun.