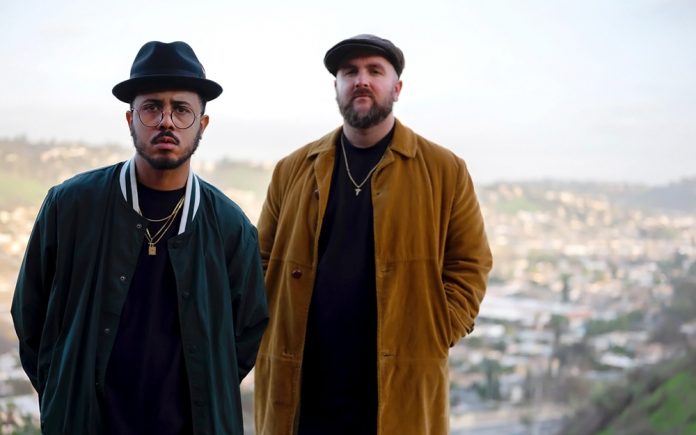 Formed in 2007, Blu & Exile are an underground Hip-Hop duo composed of rapper Blu and DJ/producer Exile and are currently based in Los Angeles. You can watch their headline performance at STREET on Friday, November 1st at 10:20 p.m. The show is FREE and ALL AGES! You can register at eventbrite.com to RSVP and print your tickets or show them via phone upon entry.

Blu & Exile gained widespread recognition immediately with their tour de force first album, Below the Heavens (2007). That album was Blu’s debut and showcases his cerebral raps and Exile’s immaculate manufacturing of beats and impeccable production. Blu provides rap vocals on all of the album’s songs while Exile produces all of the songs and raps on the ‘bonus track’ “I Am….” The album also features guest performers MC Ta’Raach, Aloe Blacc, and singer Miguel.

Blu first met Exile in the early 2000s, through Aloe Blacc, Exile’s partner in Emanon. In 2004, Blu signed to Exile’s label Sound in Color and began working with the producer and assisted him with his solo LP, Dirty Science (2006).

In 2012, the duo released their second album, Give Me My Flowers While I Can Still Smell Them and the EP Maybe One Day. In 2017, they released In the Beginning: Before the Heavens. Their latest release is an EP called True & Livin’ and dropped in May 2019 to gushing reviews by fans and critics.

Coachella Valley Weekly connected with Exile for an enlightened interview discussing his partner Blu, the monster career he has built and his upcoming performance at STREET.

CVW: You’ve been a duo for over a decade now. How did you and Blu meet?

Exile: “We’ve been making music together since 2003 just after we first met. Our first song was released in 2005 and our first album was 2007.

I was in a group called Emanon, with a rapper called Aloe Blacc who’s now a pretty famous singer, songwriter and producer. There was a label being built by peers of ours, Science Project, and they kept talking to us about a rapper named Blu. We were talking about being a part of this new label and they kept telling me about Blu. Aloe had already met him and Blu had been a fan of the work me and Aloe had done in Emanon. We went and saw him perform and it was great. I was working on an Exile album where I used different vocalists to rap over my beats. I asked Blu if he was down to do a song and he was all about it. We met up and recorded and after that first recording we started talking about our album and what we wanted to sound like.”

CVW: What was it about Blu that drew you to him?

Exile: “His energy. He was 19 when we started working together and I was 24. He just had an excited energy about the music that got me inspired. He really dug my beats which really motivated me and gave me more confidence in my music. It’s strange to see the potential in somebody without other people really knowing about it. I knew that he had a very conscious side to him. I definitely had beats that had a bit more of an emotional tone. The emotions I can gather from my work seems to bring out a more personal lyric from the artist. It ended up a really good fit for the both of us.”

CVW: What other projects are you involved with currently?

CVW: What is your background in music?

Exile: “During the divorce of my parents, at age 5, I used to live in my grandfather’s garage and he would teach me to play the accordion. He had an accordion school and that was my first introduction to playing music. My dad made music as well. He released two underground records back in the day. He’s had a resurgence and I re-pressed some of his vinyl. It’s a trip to have my father’s music re-released.

I used to go to skating rinks when I was younger and I would see B-Boys breakdancing, and the music that they would play was Electro and Funk based. Then I saw the movie Breakin’ and was really inspired by it. I then got into Michael Jackson and Run-DMC. My first tapes were The Sex Pistols and LL Cool J. that’s when I first started to fall in love with Rap. Then I got into The 2 Live Crew who had an incredible DJ. I started to get into scratching and taught myself on a home stereo system. Then I got a mixer and a 4-track and started making my own beats and mixtapes. I would attend Hip-Hop events as a teenager selling my mixtapes. They started getting popular and then I linked up with Aloe Blacc when he was 16 years old. We started making 4-track albums. This was before the internet and our tapes made it around the world. Eventually we got played on Power 106 on their Hip-Hop show. At that point we just decided we have to keep doing this.”

CVW: What are your thoughts on STREET?

Exile: “it sounds like a good time. We’re excited and down for it. It’s an interesting setting. We’re taking it back to being a ‘mallrat’. We’re going to go out there and do what they would have kicked us out for doing in the parking lot.”

Exile: “We were on tour and performed in Pennsylvania and there was a power outage in the middle of our set, everyone was tripping out. We invited everyone outside. I burned a CD of our set and we banged it out of a car stereo and we performed our whole set to the whole fucking club in the parking lot! It was really cool.”

Exile: “We’ve been connecting a lot more in person. I opened up a record shop and I have my Music Production Controller over there and he’s been coming over a lot because we’ve been working on another project. I always love making beats in front of Blu. There would be times where I would make something I didn’t necessarily like while I’m making it and want to throw it away but Blu will tell me ‘no’ and to ‘go in this direction’ and it’s just cool how his confidence in what I’m doing can help mold the creation of it. It’s a lot of fun doing it like that. I definitely give him direction too, and he takes it. It definitely works both ways. It’s also really cool when he has something written by the time I’m done.”

CVW: What has been the biggest struggle of your music career?

Exile: “When you go through personal stuff, and try to heal from that and still keep the passion for it. I think we’ve experienced moments when the joy was gone but we definitely came back. We have a new album coming out early next year. Somehow we pulled it off and we’re both happy about that.”

CVW: Where do you think music is headed?

Exile: “I see so much happening. I could see music coming back and having more of a live essence to it. I also see it total opposite. I see a lot of evil things too. Music is so saturated. We’re going to get it all. I sometimes look at music like a fight of good versus evil. I want to try to keep people listening to good music, but what is good?”

CVW: Out of all your work, what should we listen to?

Exile: “Listen to Radio (2009). I sampled everything from the high hat to the drums to the bass lines from Los Angeles radio waves. If you are someone who listens to full albums, there’s a message throughout the whole thing with how I manipulate the vocals throughout. It’s one of my favorite albums.”