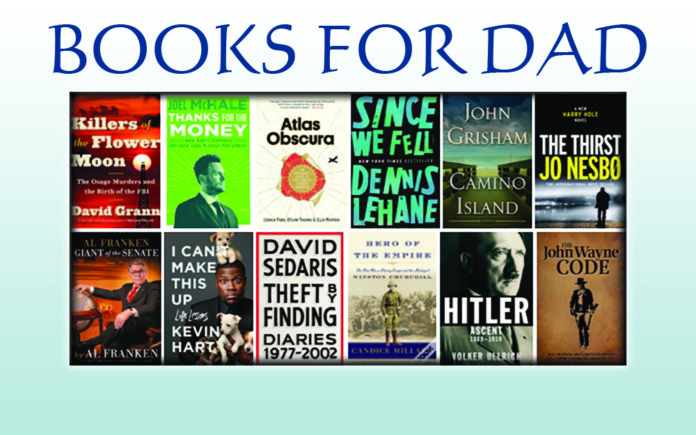 Dear old dad can always use more attention and probably some extra time off. Fathers are often the guys working hard in the background and taking little or no credit for their efforts to make life better, sweeter and funnier. That’s why Hallmark invented Father’s Day.

It often challenge to find the perfect gift for dad. So, I suggest a great book. Make dad sit down and relax with a good story and captivating characters while the family dotes on him for a change.

Here are some books to consider for your father.

Killers of the Flower Moon: The Osage Murders and the Birth of the FBI by David Grann – Nonfiction

A New Yorker staff writer, Grann, explores in detail the 1920s horrendous crimes of the multiple killings of Native Americans in Oklahoma after the discovery of oil. The young J. Edgar Hoover turns to a former Texas Ranger to solve the mystery.

Thanks for the Money: How to Use My Life Story to Become the Best Joel McHale You Can by Joel McHale – Nonfiction

Stand-up comedian and television personality (Community, E’s The Soup, The X-Files, The Great Outdoors) writes an unrestrained, aspirational and humorous memoir about his life, loves and Hollywood experiences.

Over 700 of the strangest and most curious places in the world are in this colorful and well-researched book. From architectural marvels to mind-boggling events and the bizarre, this is a fun and fascinating book that will                         captivate the curious.

Since We Fall by Dennis Lahane – Fiction

A psychological thriller with a female protagonist who, after shooting her husband, finds her life disintegrating as she explores a mystery that may be the cause of her torment.

After a significant heist at an Ivy League university, a female protagonist finds herself caught up with a gang of thieves when she goes undercover.

The Thirst by Jo Nesbo – Fiction

A retired and conflicted investigator searches for the serial killer who is targeting “Tinder” users.

Giant of the Senate by Al Franken – Memoir

The comedian turned politician writes about the twists and turns in his life that lead him from satirist to the Halls of Congress.

I Can’t Make This Up: Life Lessons by Kevin Hart – Memoir

The comedian candidly discloses his difficult and painful childhood growing up in North Philadelphia and his journey to Hollywood stardom.

The first of two volumes, Sedaris opens up his four decades of notes that served as the source of his many books, which reveal a keen observer and perceptive writer.

Hero of the Empire: The Boer War, a Daring Escape, and the Making of Winston Churchill by Candice Millard – Biography

Believing in his destiny to become prime minister of Great Britain, a young Churchill goes to extreme lengths to do something extraordinary on the battlefield and beyond.

How did the under achieving man become such a monster? This is a detailed account of the times and world that shaped the most notorious character of the modern age. This is relevant in ways you dare not imagine.

After 72 years and 150 movies, there are plenty of insightful quotes and observations from his films, personal life and business acumen.