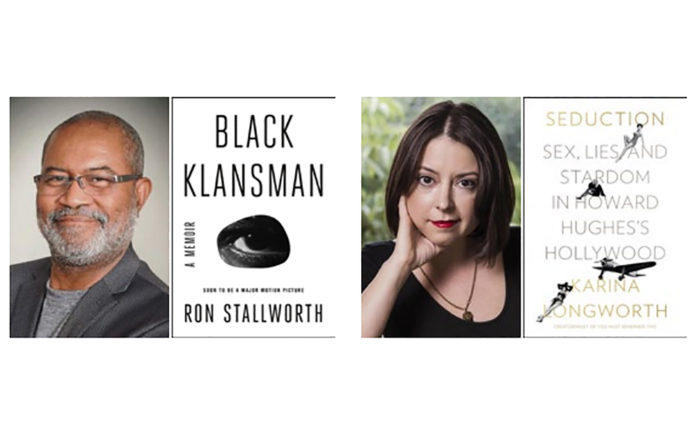 The Palm Springs International Film Festival begins this week and standing in long lines is never so much fun since it provides such a great way to meet interesting folks and strike up provocative conversations about movies.

People who attend the PSIFF, are more often than not, well-traveled and well-read.  Not such a surprise for an international film festival that has a focus on foreign films.  These are folks who don’t mind reading subtitles!

When there is a film based on a book, the question is inevitably, “Did you read the book?”  Here in Palm Springs, the answer is often “Yes!”  Ensuing conversations about the merits of the book versus the film can go on and on which makes for a great use of time while in line.

This year, the PSIFF celebrates a remarkable 30 years!  Two authors are scheduled to speak after film screenings.

Author Ron Stallworth will be present at a screening of “BlacKkKlansman” based on his memoir Black Klansman: Race, Hate and the Undercover Investigation of a Lifetime (Flatiron Books, 187 pages).   Spike Lee wrote and directed the film. John David Washington and Adam Driver star.

Stallworth is the first black detective in the history of the Colorado Springs Police Department.  When Stallworth came across a classified ad in the local paper recruiting for those interested in joining the Ku Klux Klan, he responded using his own name, but posed as a white man.

Stallworth expected to learn more about potential terrorists threats or get a magazine or brochures in the mail, but instead he got an invitation to join the KKK cause.  Having his partner stand in for him as a white man, Stallworth himself continued communicating with the Klansmen by phone.

Stallworth is heroic as he reveals the ugly side of America.  This true story reads like a crime thriller.

The PSIFF screening of “BlacKkKlansman” is scheduled for Tuesday, January 8, 4:00pm, Palm Springs Cultural Center (formally Camelot Theatres) and will feature a conversation with Stallworth.

Author Karina Longworth will be on hand to sign copies of her book Seduction: Sex, Lies and Stardom in Howard Hughes America (Custom House, 557 pages) after a screening of the 1953, Howard Hawks directed film “Gentlemen Prefer Blonds.”

The media continues to uncover entertainment industry harassers and abusers who used their power and money in Hollywood to sexually coerce women and men.

Longworth reminds readers that long before the Harvey Weinsteins there was Howard Hughes—the Texas millionaire, pilot, and filmmaker whose reputation as a cinematic provocateur was matched only by his prolific womanizing.

Katharine Hepburn, Ava Gardner and Lana Turner were all big stars all under Hughes’ spell.  Longworth contends that Hughes commoditized male desire and objectified women more than any other filmmaker of his era.

Seduction is a timely book that examines the history of women, sex and Hollywood’s male dominated exploitation.   This special PSIFF event opens up a relevant conversation about sex and gender during the golden age of Hollywood.

The screening of “Gentlemen Prefer Blonds” starring Jane Russell and Marilyn Monroe is Thursday, January 10, 4:00pm Palm Springs Cultural Center and is followed by a conversation with the author and a book signing.

Enjoy the Fest and be sure to check out these two terrific nonfiction books.