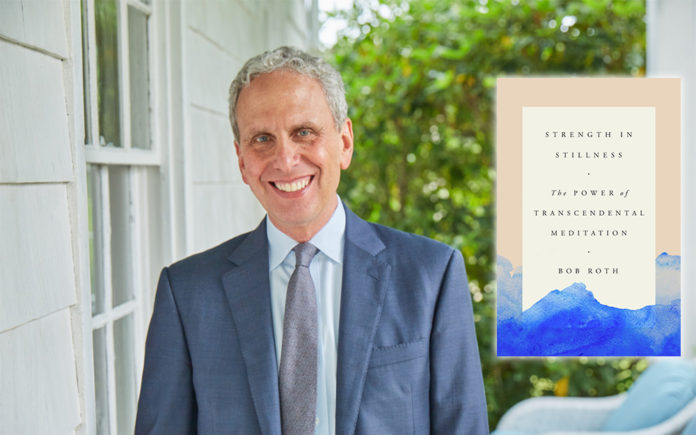 A myth has been widely spread that we humans only use 10 percent of our brains.  Although there are still mysteries about brain function—consciousness and memory– neuroscientists confirm that we human beings use 100 percent of the grey matter compressed in our skulls.  Strength in Stillness: The Power of Transcendental Meditation (Simon & Schuster, 215 pages) by Bob Roth, asks if there is a way to better control what’s in our heads, would you do it?

Author Roth himself does not actually ask the question above, however, his book as a whole does.   And the answer does not come in the form of a “do-it-yourself” or “how-to” guide.  Strength in Stillness is all about the sub-title: Transcendental Meditation, or as it’s more commonly known, TM®.

If you grew up in the 60s and 70s, TM was a popular fad among “hippies” that many believed to be a cult or potentially dangerous.

In the introduction, Roth attempts to dispel these notions by sharing that he himself has been practicing TM for 45 years and he is absolutely not “New Agey.”  In fact, he claims he is a skeptic and a man of science.  He wears a suit, and I guess because it is not made of gauze he’s credible?

Roth is likeable and he conveys a genuine passion for TM that is enticing.  He says throughout the book that to practice TM “There is no philosophy, change of lifestyle, or religion involved.”   For thousand of years, TM has been passed down from teacher to student with a “precise technique of how to personally teach any individual to transcend—to effortlessly access the deep stillness that lies within every human being.”  The meditation practice is twice daily for 20 minutes.

The book is organized into three sections or “Pillars.”  Roth breaks down the approaches to meditation and the techniques: Focused Attention, Open Monitoring and Automatic Self-Transcending.   Making his case for TM, Roth says it is different than other forms of meditation and much easier to practice.

Roth uses the analogy of a turbulent ocean.  On the surface the waves are churning, but as you descend to the sea floor, it becomes calm.  Roth “hypothesizes” that the mind is the same way – active on the surface, but deep within there is a level of calm — “Calm yet alert; silent yet wide awake.”

Pointing to ancient meditation texts, this state is referred to as the “source of thought or pure consciousness– a field of limitless creativity, intelligence and energy within.”

This is the stuff I want to possess!  But, the book is not a tool to learn these techniques.  It is an advertisement for local TM Centers and TM programs.  Roth does a great job dispelling the myths and fears of TM and the book is filled with scientific studies that show how effective meditation is on heart health and stress relief.  I believe Roth and am reassured by his words that there is nothing “cult-like” or dangerous going on.

However, I can’t get that idea out of my head completely because there is a secretive nature to TM and it costs money.  To begin, you sign a disclosure form to not reveal its secrets.  The book is also filled with first-person testimonies mostly from celebrities, which has an icky Scientology feel to it– although, I actually like and respect the celebrities who write in this book and practice TM.

What I especially appreciate is Roth’s efforts through the David Lynch Foundation (Yes, the filmmaker) to reach at-risk children in schools.   There is no scientific data, but schools that have been applying a TM program called “Quiet Time” in the classroom have seen improved test scores, less absenteeism and kinder campuses.  Who would argue with that?  Wish I had that in school.

There is a Palm Springs TM Center and it is a very lovely place.  After reading Strength in Silence I signed up for the free introductory course to see for myself.  Everything Roth said in the book about the meeting was true.  Then I filled out paper work and was shown the sliding fee schedule.  The director and certified teacher was kind, helpful and sincere; no doubt a competent instructor and probably a good person (he seemed harmless).

It is hard to monetize unlimited access to creativity, self-awareness, and energy, while also ridding yourself of anxiety and stress – those things are truly priceless, but that doesn’t mean it’s affordable.