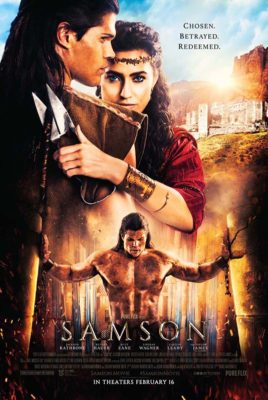 “Should Israel from Philistian yoke deliver;

Ask for this great deliverer now, and find him

Director Bruce MacDonald’s “SAMSON” is the latest film from PureFlix, a faith-based production and distribution company that also operates a “Christian” version of Netflix.  Also from PureFlix, “SAME KIND OF DIFFERENT AS ME is now available for home viewing.  It’s nicely photographed, good cast but tedious, poorly structured and sadly boring – the latter is the ultimate sin of movie-making.

Their big screen biblical epic is sanitized, sincere and sluggish.  Samson (Taylor James) Delilah (Caitlin Leahy), King Balek (Billy Zane), Zealphonis (Lindsay Wagner), Manoah (Rutger Hauer) all do their best with the script they were given.  I was hoping for a more imposing Samson and seductive Delilah.  The movie is an unlikely love story, kind of a biblical Romeo and Juliet, but there’s very little genuine passion – at least on screen.  I guess it’s OK for PureFlix to show the graphic and bloody slaughter of hundred of Philistines but not a second of screen time is given to any moments of intimacy, or passion between Delilah and Samson.

Mary Pickford’s D’Place Entertainment hosted a special Q&A screening with Delilah actress Caitlin Leahy nicely moderated by Bryan Gallo.  The film was shot over three months in South Africa.  She confessed about knowing very little about the Biblical story and experienced no difference between doing a so-called faith-based” movie and a secular one.

Caitlin’s Delilah stole every scene she was in.  She said her intent was to show Delilah as a loving person who truly cared for Samson.  She made the movie work, and not just because of her electrifying eyes and natural beauty.  It was fun seeing Billy Zane chew up the scenery as King Balek.  I was surprised to see Rutger Hauer as Manoah, Samson’s father.  He’s still distinguishable behind a massive, beard.  Lindsay Wagner is another standout as Samson’s mom Zealphonis.  Wagner is lovely, playing her age seemingly without makeup.  Bravo for her.

PureFlix says it has always been their vision to, “serve alongside the church by providing affordable and effective Movie Ministry Solutions to use for Outreach, Church Growth, Fellowship Opportunities, Small Group Ministry and Sermon Messages.”

That seems to me quite a different agenda than simply producing uplifting movies with Biblical themes.

While watching “SAMSON,” it’s hard not to consider political agendas (present or not) from an admittedly conservative Christian organization.

For instance, the word “Palestinian” derives from Philistines, a people who were not indigenous to Canaan but who had gained control of the coastal plains of what are now Israel and Gaza, the latter Samson’s home-town and the setting of the movie. 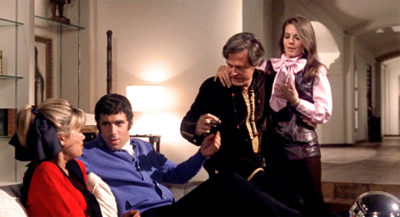 The late Paul Mazursky’s directorial debut, co-written with Larry Tucker, is a somewhat farcical comedy of manners about two-Eisenhower era couples caught up in the sexual revolution of the late 1960s.

Bob (Robert Culp), a successful documentary filmmaker, and his wife Carol (Natalie Wood) are a sophisticated California couple who attend a secluded institute like Big Sur’s Esalan for group therapy.  Their original intention is to just watch and check it out, but they become so involved that thy decide to test the strength of their marital bond and honesty by experimenting with “mutually tolerated affairs.”  Ted (Elliot Gould) and Alice (Dyan Cannon) are their closest friends who find themselves continually amused at the latest Bob & Carol sexual adventure –- until finally they are invited to “liberate” themselves in a one-bed ménage a quatre.

The extras on this limited (only 3,000 units) edition include Quincy Jones’ music track as an isolated option.  But the best extra is the wonderfully informed and revealing commentary track with film historians Julie Kirgo and Nick Redman.  TwilightTimeMovies.  Blu-ray.