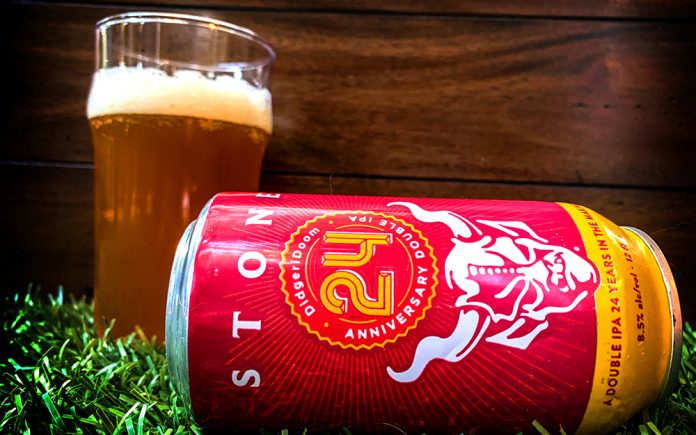 1996 was a landmark year from country to coast across the entire United States. Bill Clinton defeated Bob Dole to win a second term as U.S president, becoming the first Democrat since Franklin D. Roosevelt to serve a second term. The very first ever clamshell flip-phone went on sale that year, giving people the option to no longer look like they were making a phone call with a cinderblock. Future boxing legend Floyd Mayweather controversially won a bronze medal at the 1996 Olympics, losing to silver medalist Serafin Todorov, whom even Stevie Wonder could have seen had lost that match to Mayweather. The Yankees beat the Braves to win their first World Series in 18 years, and in San Marcos, California, business partners Greg Koch and Steve Wagner founded the Stone Brewing Company.

Throughout the late 90’s and 2000’s, Stone, Karl Strauss and Green Flash would go on to popularize an assertive, extremely bitter style of IPA that emphasized IBUs (International Bittering Units, used to measure the alpha acids and other bittering compounds present in beer) and ABV (Alcohol By Volume), colloquially known as the San Diego style of IPA. It became custom over at Stone Brewing to release a special anniversary ale, the first annual version just being their flagship IPA recipe with extra hopping. While the company would experiment with trying new styles for their anniversary ales (their 12th anniversary Bitter Chocolate Oatmeal Stout stands out as a curiosity), a pattern emerged of releasing a special run, limited double IPA to commemorate another year in business. Here we are, 24 years and 24 anniversary ales later, with Stone’s latest anniversary ale, DidgeriDoom.

The official press release for DidgeriDoom suggests that the name is portmanteau of the word didgeridoo and the metal subgenre Doom, stating “Australian hops may be a well-loved staple in craft beer now, but when we started up a small brewery in North County San Diego twenty-four years ago, they were unattainable on our side of the Pacific. These intense varieties boast a multitude of dank & tropical elements, building a flavor profile as powerful as the sound of a didgeridoo. Or a limited-press vinyl of some lesser-known doom metal.”

Boasting the use of Galaxy, Ella, and Vic Secret hops, Stone’s latest anniversary ale is limited to a small, California only run. With bars and restaurants still either closed or operating in limited capacity due to the covid-19 pandemic, it seems hard pressed to be able to find this beer on tap. Bottles and cans seem the likeliest way you’ll be able to get your hands on DidgeriDoom DIPA (aka Double India Pale Ale). My buddy Quinton and I ordered packages from Stone to take part in their virtual tasting event, and included with each box was a can of DidgeriDoom DIPA. We cracked our cans and got to evaluating.

APPEARANCE: While looking unfiltered and a bit murky, it doesn’t have straw to French gold color of a hazy IPA. This is the golden appearance of the west coast IPA, the opaqueness giving the color definite orange hues. Head retains nicely, and leaves a dense ring of foam on the inside of the glass. 4/5

TASTE: I taste intense orange zest up front, followed by pine and even some spruce. Cantaloupe and melon in the mid-palate, followed by citrus pith. Make no doubts about it, this is a very Stone DIPA. Quinton says “I get pineapple flavors up front, but quickly taken over by that typical Stone bitterness. It’s drinkable but I expected more”.  For better or worse, harsh, astringent bitterness is the hallmark of every over-hopped Stone ale, this is no exception. 3/5

MOUTHFEEL: Medium, not as thick or coating as other DIPA, but smooth despite some astringency. Quinton sips his and says that the mouthfeel is coming across as particularly thin. An expected level of carbonation for the style. 3.5/5

OVERALL: In the 24 years since its inception, the Stone Brewing Company has amassed a worldwide following and helped convert many casual beer drinkers into alpha-acid loving hop-heads, Quinton himself being a longtime fan of Stone for the way their products spoke to him. Unfortunately, as innovation leads to imitation leads to new heights, pioneers always end up showing their age. Stone’s tendency to bitter their IPAs in the name of audacity was groundbreaking a decade ago, but a lack of progress sees the companies once lauded IPAs surpassed by newer blood intent on making names for themselves. Never the less, DidgeriDoom is a worthy addition to Stone’s vault of bitter brews, and fans of the brewery’s style will not be overly disappointed.  3.875/5