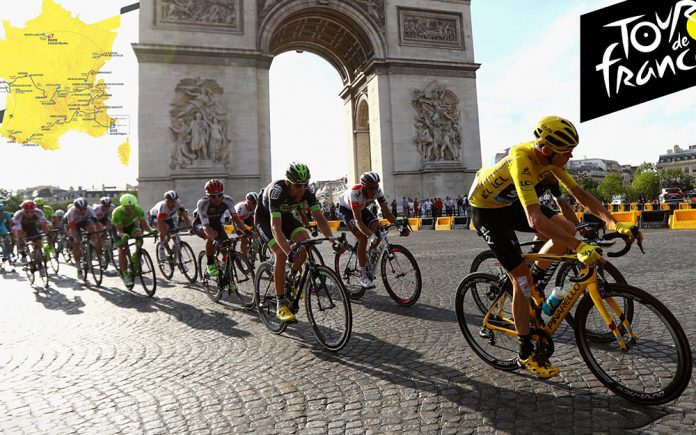 The Tour de France is back! The running of the world’s largest annual sporting event on the planet, originally scheduled to start in June 2020, was postponed due to the COVID-19 pandemic in France. In a crazy alternate world, there was talk of the bicyclists going on Zwift, allowing players to ride their bicycles on stationary trainer bikes while navigating through six virtual international countries!

Thank goodness we avoided all that stuff! The 2020 Tour de France, in its 107th year, is back riding again as it re-commenced this past week for the traditional three week jaunt through the country-side and towns of France.

Many of us enthusiasts began our vino love affair with that bottle of Bordeaux, Burgundy, Champagne, Beajolais, and/or Loire Valley white wines. And as a result, we’ve always found an interest in the Tour de France in its dynamic sporting circuit, along with the opportunity to watch beautiful French scenery on the TV coverage.

The racing route all around France varies each year. What remains constant is the final dash on the Champs-Élysées in Paris for the ultimate win. This year the race began in the French Rivera in the City of Nice. Quelle Merveille! What memories come to my mind!

And how fortunate for my wife and I, spending five weeks in European wine county last year, to have the opportunity to drive from Lyons to Nice—via the eastern mountain route with all the hair-raising turns and curves. And adding to our memories is the fact that the Tour de France cyclists, for three or so days, took almost the same route through the lower Alps last year and are hitting some similar points this year! Talk about recognizing some scenic spots—cool stuff!

As one can tell by my exuberance, we’re also enjoying this year’s belated Tour by way of a “virtual tasting”—tasting through some wine that is indeed produced in the areas that the cyclists are riding by—after all, we’re talking about France!

This year’s 107th Tour is especially geared around the south and central part of France. In some years, they’ve even started in Belgium and riding much in the north. This year however most of the mileage meanders around and through the eastern forest area and around the lower French Alps, along with a quick run through the Pyrenees —two-thirds of the 21 stages taking place. Some small jaunts down the Loire Valley, then back to the east forest and finally up north to Paris for the finale.

Here are some of the wines we are virtually enjoying with spectators along the Tour:

On the second week of this year’s Tour, we move on up to the Loire Valley where we can enjoy some Muscadet [moos-kah-DAY]. It’s the name of the wine, not the place or a grape (where in Muscadet’s case—the grape is Chardonnay’s cousin, Melon de Bourgogne). This is a very light-bodied, very dry white that is slightly salty but balanced with welcomed acidity. It shows flavors of anise, green apples, flowers, grapefruit, lemon, lime, melon, minerals, peaches, pears, sea breeze and yeast. Your mouth should be watering just about now.

Muscadet could well be the signature wine of the Coachella Valley. Serve this chilled to around 45 degrees and it will handle the desert heat and every appetizer, salad, white meat and shellfish dish around the table.

The third week of the Tour goes east again and will finally find itself riding on the west side of the Jura Mountains. There are woodlands and meadows about; and its appellations of Arbois and Cotes du Jura own wholly original ancient grapes that are the fascination of vino lovers and foodies. 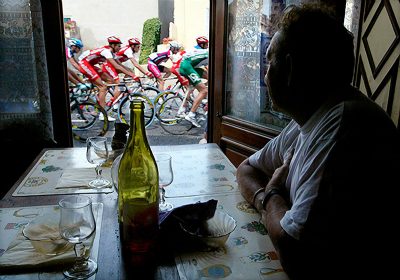 The other version, known as Vin Jaune [van-ZHOHN], is the famous strong “yellow wine of Jura” where the Savagnin grapes are picked as ripe as possible, fermented and then left in old Burgundian barrels for over six years—it can age for a century! This wine is not for the faint of heart—crazy flavors of apples, smoke, nuts and nutmeg, citrus and spices. It needs adequate decanting and aeration as it is very aromatic and intense. The French love this wine with the local poulet de Bresse along with Comte cheese.

If you ever put together a pungent cheese platter, have a bottle of Vin Jaune on hand and watch your wine-loving friends go crazy with such a tasteful pairing!