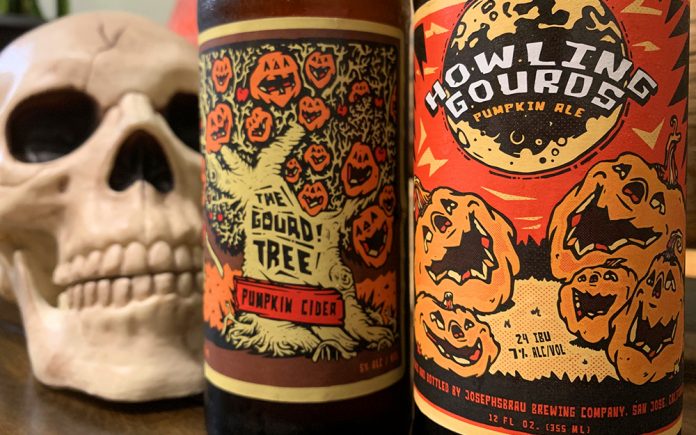 Well, Fall is once again upon us, and that means it’s pumpkin spice season. Corporations and small businesses alike have inundated us with a proliferation of flavored products that taste like a Yankee candle, giving us everything from pumpkin pie car fresheners to pumpkin spiced spam (I kid you not). Trader Joe’s has shamelessly gone off the deep end of the cinnamon and nutmeg themed pool, and put that shit in everything. Their entire store is a veritable cornucopia of pumpkin themed products this year, including all of the pumpkin spiced food and drink, and I had to jaunt on over to see it all for myself. Their turkey and pumpkin mole burrito sounded like something I’d never want to eat, yet there it was in the prepared food section, waiting like a trap-door spider ready to assault some unsuspecting prey. A box of pumpkin spiced empanadas went into my cart, but I’d need a frosty beverage to wash all of those tasty morsels down with. I wandered over to the beer isle to find what I’d been hoping to see, pumpkin spiced beers and ciders.

Howling Gourds Pumpkin Ale is the name of Trader Joe’s pumpkin spiced ale, brewed and sold once a year during the fall season. While the back of the label says that it was brewed by the Josephbrau Brewing Company, it’s no big secret that the company uses contract brewers to do the actual brewing for them. Contract brewing is when a brewery hires another brewery to make beer for them. Say, for example, you own a small brewing operation, and you’ve got a beer that begins selling phenomenally, so well that it becomes increasingly difficult to keep up with demand. That’s when you find another brewery who has the means to brew your popular beer exactly the way you would, and you contract them to brew your popular beer, ensuring that public demand is met. In the case of Trader Joe’s, they own a brewery in name, but no brewing equipment, so they solicit a select few breweries to handle the physical work for them. The companies who brew for Trader Joe’s may do all the work, but Trader Joe’s has full creative control over what goes in the beer and how it tastes. It was with this knowledge in mind that I put a 6-pack of pumpkin spiced beer in my cart and said three Hail Marys to protect myself from any impending awfulness. 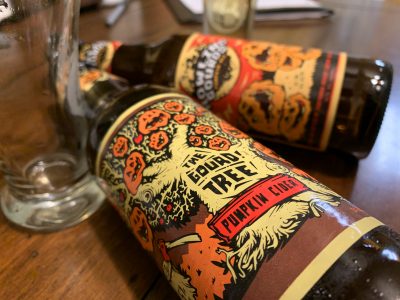 Despite hard seltzers being wildly popular for the last couple of years, hard ciders have seemingly made a comeback during the summer quarantine of 2020. Hard ciders used to be a niche market, but my Trader Joe’s had an entire section dedicated to the stuff, showcasing a wide variety of flavored ciders. The Gourd Tree! Pumpkin Cider is the sister product to Trader Joe’s pumpkin ale, featuring matching artwork and style. A few of those bottles went in my basket as well, and home I went to drink.

I enlisted the help of my girlfriend Velia to rate, review, and give possibly differing opinions on these pumpkin spiced novelties. We rated each beer on their aroma, flavor, label, and appearance in glass, taking in all of the pumpkin spiced flavors as best we could. For the sake of simplicity, our separate scores were weighed and averaged together for a single rating in each category.

APPEARANCE: “The artwork on the bottle is approachable and fun,” says Velia of the Howling Gourds Pumpkin Ale, “It puts me in the mood for Halloween.” Featuring a bevvy of mirthful yet grotesque pumpkin faces baying at the moon, the bottle houses a crystal clear, blonde colored ale that poured into a glass beautifully. The head of foam dissipated quickly, leaving no lacing on the edge of the glass. 4.75/5

The Gourd Tree! Pumpkin Cider bottle features work from the same artist, with howling pumpkins hanging from an apple tree. The cider poured a very light, almost straw-like color, similar to a Michelob Ultra. Superb clarity to this drink, with almost no head of foam at all. 4.38/5

NOSE: Howling Gourds Pumpkin Ale smells astonishingly like a baked pumpkin pie. The vegetal, sweet earthiness of roasted pumpkin, with notes of nutmeg, clove, and allspice. A breadiness that reminded me of pie crust. 4.75/5

Conversely, The Gourd Tree! Pumpkin Cider smells like an apple pie. “Like drinking a glass of cider in a pumpkin patch”, says Velia. The same notes of nutmeg and cinnamon, with the tart, sweet smell of apples. Very juicy aroma, with a dominant allspice kick. 4.75/5

TASTE: Howling Gourds Pumpkin Ale disappointed where it mattered most, in flavor. Dominant spice notes mask what tastes like a very pleasant blonde ale. Roasted gourd flavors hide beneath heavy allspice and nutmeg, with just a touch of clove. Velia says it tastes less like pumpkin than it smells, and that there’s a bitterness that’s just too intense. There is a definite bitterness here, and a Willamette hop flavor that clashes somewhat with all of the baking spices. I pick up notes of ginger root in the back end of the palate, and find the complexity of this brew to be better after a few sips. 3/5

Velia enjoyed The Gourd Tree! Pumpkin Cider much more, calling it juicy, spicy apple cider with just a hint of pumpkin. All of the flavors present in the ale are in the cider as well, showing up much more prominently in this semi-sweet drink, and without the bitterness of hops to clash with them. Ginger root shone, but flavors of clove came across as sharp and mouth numbing. 4/5

MOUTHFEEL: Both ale and cider have medium-thin mouthfeel and appropriate levels of carbonation. (both) 4.2/5

OVERALL: Most people either love or hate pumpkin spiced beer with good reason. When over spiced, they’re atrocious, leaving you feeling like you drank the bong water from some pumpkin spiced kush. While Howling Gourds Pumpkin Ale comes across as a touch heavy handed, it’s better than I would have expected, and enjoyed the complexity it provided. While not for everyone, it’s worth checking out for the bargain price of $6.99 a 6-pack. Velia did not like this beer, while I did.

She did however, love The Gourd Tree! Pumpkin Cider. Much more approachable than its beer counterpart, this is a great product for those familiar with craft cider as well as cider newbies. Like with the ale, the spices can be a bit heavy handed, but it’s much more pleasant with a semi-sweet base like this cider. Definitely recommend this for all lovers of pumpkin spiced everything.