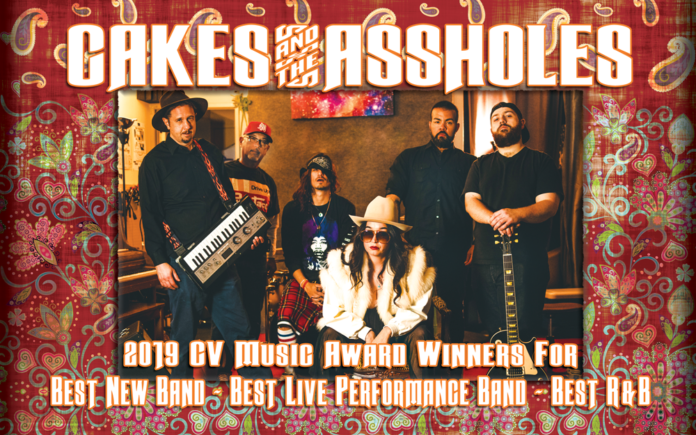 Performing LIVE at MELROSE RECORDS ‘The Best of the Desert Showcase’

On Saturday, July 20th the first ‘The Best of the Desert Showcase’ at Palm Canyon Roadhouse in downtown Palm Springs will feature live performances from CAKES & The Assholes, Empty Seat, Giselle Woo & The Night Owls, CMF’s, Jetta King and Krystofer Do. The event is presented by Melrose Records CEO David Williams, who also owns Melrose Music Studios in Hollywood and Palm Springs. We spoke with (CAKES) Monica Morones (vocals), (The Assholes) Joshua Fimbres (drums), Aaron Ramson (bass & background vocals), Nick Hales (guitars & background vocals) and Rene Almodovar, Sr. (percussion) about their participation in the show and their collective pie in the sky. Let the THC and ‘shrooms flow.

CVW: Hey everyone. Congratulations on your 2019 CVMA wins for Best New Band, Best R&B and Best Live Performance Band. What are your thoughts on performing at Palm Canyon Roadhouse for David William’s first local artist showcase?

Morones: “Thank you! I’m stoked to play with the line-up that’s performing. It always feels good to get asked to play. Thank you to David Williams for including us and we are looking forward to making love to people’s faces and ears with our ‘Pussy Poppin’ music. It’s basically, everyone from the CV Weekly showcase but this time I get to roll around on the ground and grab myself for fun. Contests are always so serious. I’ve never played at the Roadhouse though, so I plan on taking plenty of drugs to mask my disappointment just in case the sound is horrible which in most ‘music’ venues in the desert it is. It always feels good to be asked to play so I’m looking forward to giving people something new to hear on the west side of the valley.”

Fimbres: “We first met David at the first CV Weekly showcase. He told us he loved what we were doing. He compared me and Nick to Jimi Hendrix and Experience drummer Mitch Mitchell.”

CVW: You’ve come a long way in a short time and have developed a following that expects the unexpected. What should we be looking forward to for this upcoming show, any special appearances? 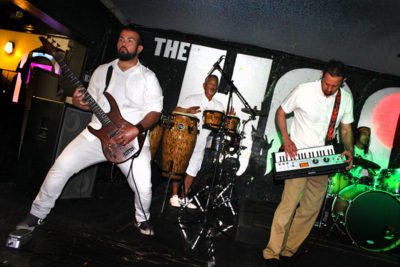 Morones: “I mean…we always put on a good show so maybe some new music and a titty popping out?”

CVW: If I remember correctly, you have a song with the word “pussy” in the title. What’s the status on your new music?

Morones: “We are working on new songs every week. That song you asked about is “Pussy Poppin’ Blues.” We have our solid set we’re cleaning up and since we added Shannon Technohillbilly on keys, our sound has evolved into something glorious. I don’t just want to be another desert rock band; that shit’s played out, I want to be that new ‘new’. We’re currently shopping around for recording studios. We hired local artist Anta to make our band logo and then we’ll make merch and then record. We are funding everything ourselves, so might take a couple more months because GoFundMe is kinda tacky don’t you think? And we only play shows we get paid for so might be a minute because promoters and venues still think it’s cute to make money off of bands and pay them in exposure.”

Hales: “I can’t wait to really experiment with some new trippy sounds. It’s gonna be a great experience really putting our studio sound together right. Room 9 studios is what I would recommend for this outfit, but whoever we end up with will be rad.” 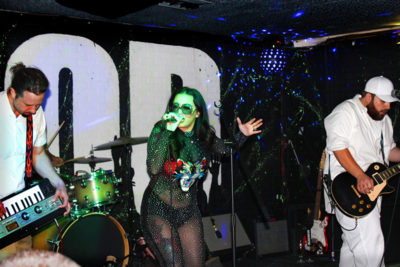 CVW: Early on some of you joked about how you don’t take yourselves too seriously and, in my opinion, really minimized the talent in that rehearsal room. After all the attention, how are rehearsals going now?

Morones: “Rehearsals are rad AF! We rent out The Flusters’ studio in Palm Desert and practice as much as our schedules allow us and whenever Nicky, with his 17 bands, tells us he can practice. Can you please tell him to stop saying yes to other bands?”

Hales: “Ha Ha! I’m still working my way through them.”

CVW: (The band played a couple of snippets of new music for me) The seemingly Eastern-influenced song is very catchy. That’s some snake-charming shit right there. I think Monica should ascend in slithery fashion from a woven basket for this one.

Ramson: “Monica makes all the ‘snakes’ stand up. We’ve been messing around with Jefferson Airplane and getting a cover together. CAKES & The Assholes are here to ‘Make Mushrooms Great Again.’”

CVW: You’ve accomplished great things in your first year. What does the next year look like for you?

Morones: “It’s the Assholes’ time. We’ve put in the work, we’re actually good. We don’t give a shit about the social stigmas and desert norm. We play music because we love it, everything else is a bonus. We will put out an album, do some more local shit, do plenty of drugs, all organic and from the earth, I promise, and then book shows out of town. Book some good shows for fuck sake! Probably look for a booking agent. Do some more organic drugs and then Nick’s fingers are going to fall off from all that playing in all those bands and we will all die. The end.” 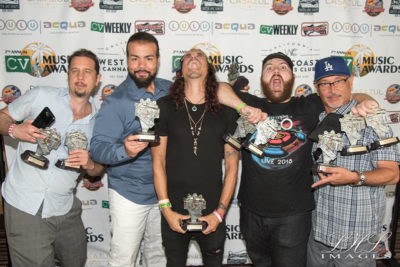 Morones: “Was that all too weird? I ate an edible and I’m feeling myself in outer space right now.”

Despite the clowning and seemingly irresponsible nature of CAKES & The Assholes, they take this art thing seriously and would rather you reach your own conclusions than have to illustrate it for you.

In true “asshole” fashion, Fimbres took over the interview and asked his bandmates a couple of questions:

Fimbres: “We’re spicin’ this article up ‘Goof Troop’ style! Hey Aaron, why do they call her CAKES?”

Ramson: “I’m just here for the sex and drugs.”

Fimbres: “Hey Rene, what’s it like playing percussion with a wild ass drummer?”

Almodovar: “It’s cool playing percussion with Josh because of all the different styles of music the band is playing. He gets to show his skills and gives me space to do my thing!”

Fimbres: “Hey Nick, what’s a key ingredient that makes this band different than the others you play in?”

Hales: “The chemistry is what I love the most. You got Josh, nuff said. Sir Aaron ‘Cramson’ who never ceases to amaze or surprise me. Rene on some sneaky percussion and always suggesting good arrangements for songs (ALREADY A GREAT FOUNDATION!). Monica, our fearless leader, is great with literally every logistical thing having to do with CAKES & The Assholes. She’s a great businesswoman and she’s chill AF. Playing in this band has taught me a lot of painful restraint, and I’m still learning a lot in general by virtue of just being in this band. I had to hold back A LOT more once Shannon jumped in! Shannon is a force to be reckoned with and surprisingly enough, we mesh really well together. I don’t see myself dropping out of this band anytime soon! The winds of change are heading my way pretty soon here and I will probably be downsizing. Things are lookin’ up for ‘ole ‘Nick the Slick’!”