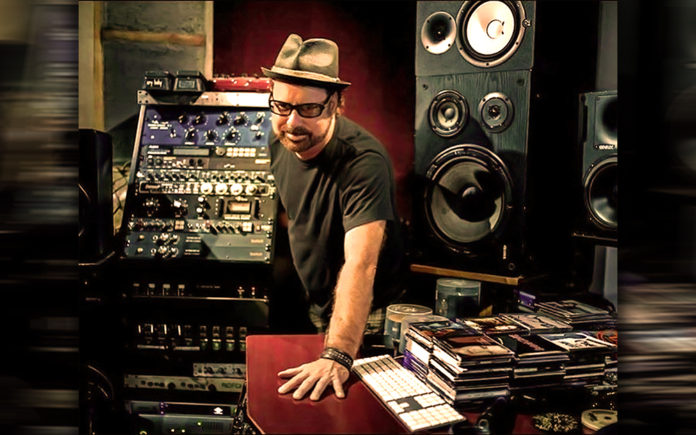 David Williams, CEO of Melrose Music Records and owner and operator of Melrose Music Studios in Hollywood and Palm Springs brings you his first ‘The Best of the Desert Showcase’ at Palm Canyon Roadhouse in downtown P.S. The show begins at 7 p.m. and is FREE to everyone 21+.

Coachella Valley Weekly met with the immensely talented audio engineer, producer, and multi-instrumentalist Williams at his P.S. studios to get a more profound understanding of he and his dominion.

On his move to the Coachella Valley, relationship with Palm Canyon Roadhouse and our blossoming music scene:

“When I moved to P.S., I discovered the venue quickly since it’s less than a mile from my house. I started out jamming with local musicians there and quickly made friends with many. I became good friends with local promoter Steve Johns and told him about my ten-year run of showcases in Los Angeles, the Melrose Music Review. He suggested I bring the show to the Roadhouse and feature up and coming L.A. bands. I went for it and we had some really memorable shows over the past two years. After diving headfirst into the scene, I told Steve I wanted to showcase local bands.

I’ve been in L.A. for years actively performing, recording producing and promoting. I decided after many trips out to the desert that the music scene here is so very promising with amazing talented original artists. After judging many CV Weekly Music Showcases, I really got a full example of the scene here. I’ve been hosting many shows over the three years I’ve been here featuring L.A. bands. I realized the bands in the C.V. were the real driving force I’ve been searching for. When I came out here, I loved the vibe. I realized there’s such a great musical family out here with great artists. The immense amount of talent out here really excited me, so I decided I wanted to focus as much as I could on Palm Springs. I feel it. There are great players out here. There’s a great vibe out here because everyone is not so commercial. Everyone out here is trying to support the love for music. I feel out here there’s some undiscovered talent and that’s why I’m drawn to this area.”

On his artist/band choices for The Best of the Desert Showcase #1.

“I chose the six bands for my first local showcase from the CV Weekly shows I judged and from the list of nominees and winners from the CVMAs. This upcoming showcase is new and extremely exciting to me. I feel very fortunate that Phil Lacombe and Tracy Dietlin gave me the chance to meet all these artists beforehand. I got to meet the artists and they would come up to me after the show to ask questions and further inquire about why I said what I said and my thoughts on their performance. They all seem excited. I want them to eventually work with me. They’re promoting themselves; I’m promoting the studio.”

On Brad Parker and the desert becoming the next big thing.

“Brad Parker is a well-known recording artist, songwriter, producer and musician who facilitates showcases at Pappy & Harriet’s. He and I feel strongly about this area. He’s lived in a lot of the different scenes, Athens, Georgia; Austin, Texas; Asheville, North Carolina; and Bowling Green, Kentucky. We both feel this is the next big scene. He helped me open my eyes to see what’s going on. We see there is a community here. In L.A., if you want to get a band together, you go hire the people, it’s very commercial. Here, everyone knows everybody. There’s a camaraderie. That’s what excited me.”

A look back on his beginnings and new lease on life.

“I’m originally from North Carolina and headed to the West Coast working the Sunset Strip as a guitarist straight out of college. I am a guitarist first and foremost. I went on the road playing guitar in bands. I do a lot of overdubbing with mandolin and steel guitar for my clients. Once I settled in L.A. I decided to stop the journey. In the mid-90’s I had kidney failure and received a transplant at UCLA. 25 years later, all is going great. That experience was a life-changer which led me to establishing my first L.A. studio. I had always been into recording. So, this was very exciting and fresh for me. From three initial locations, I finally ended up building my present studio in Hollywood at Raleigh Studios film lot. I’ve recorded mixed and mastered countless artists there for the past 14 years.” 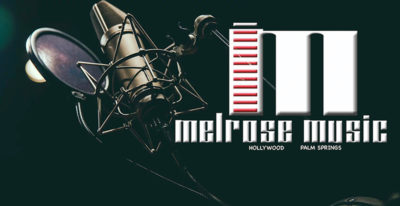 On the love of his life and Melrose Music Palm Springs.

“In 2016 I was looking in L.A. for a new residence. I had met Mary Kathryn Brown, my fiancée, and wanted a home together. I found a listing I loved and after reading further I realized it was in P.S. I decided to take a look and we made a move. At first, we split our residences between L.A. and P.S. but as I realized the potential and lack of recording facilities here, I decided to build Melrose Music Palm Springs. I now have a permanent residence in P.S. and still split my week between both studios.”

On the new Palm Springs Recording Studios and what he’s working on currently.

“I am working on some very exciting recordings in both L.A. and P.S. now. I’ve also just partnered up with some great friends, Leanne McNeil and Kid Tarri, both formerly of Capitol Records. She came knocking on my door one day and said, ‘we want to know what’s going on in here.’ They are owners and operators of Bantam Studios in Joshua Tree. Our new coop is called Palm Springs Recording Studios. It also includes Mark Fry and his Bass Emperor Studios in Sky Valley. Between the four studios, we have the facilities to handle all recording possibilities. Also, I have just added a live piano tracking room in P.S. with 14-foot ceilings and a Baldwin Grand Piano. I plan to do intimate house concerts at this new location. Bottom line, we have facilities in L.A. and the C.V. to bring any production from inception to final mastering.”

On popular and Coachella Valley/High Desert artists he has worked with: 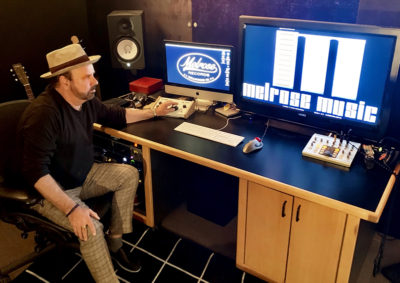 On the recording studio equipment utilized at Melrose Music:

His message to possible clients:

“If you come to any Palm Springs Recording Studio you will walk into a professional environment with experienced producers who are going to listen to you and cater to your songs and try to bring out the best from your songs and direct those songs to become mass-marketable records. We can work with any genre; Pop, Rock, Country, Hip-Hop, Rap, Big-Band, Jazz, Singer-Songwriter Acoustic. We are happy with a hard-core rapper or a beautiful love song coming in. We don’t criticize or judge; we try to bring out the best in anyone who walks through our doors no matter the genre.”