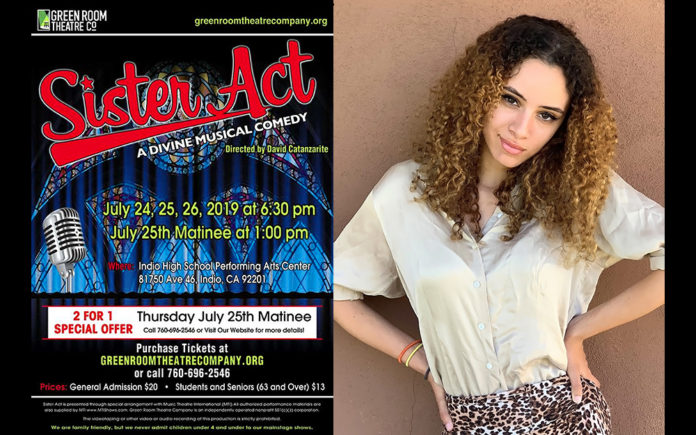 Filled with exuberant musical numbers, from 1970s disco to Motown to gospel choir, Sister Act is a fast paced, inspirational, and fun-filled musical perfect for the entire family. A truly moving production, Sister Act sings and dances its way through a story about love, cops-and-robbers, friendship, commitment, and the wisdom to make the right choices in life. Featuring original music by Tony- and eight-time Oscar winner, Alan Menken (Newsies, Beauty and the Beast, Little Shop of Horrors), this uplifting musical was nominated for five Tony Awards, including “Best Musical.”

The opening night performance on Wednesday, July 24, features a “Green Carpet” Gala from 4:30 to 6 p.m. and is open to all ticket holders. The lively celebration will include appetizers and beverages, music, a step-and-repeat photo opportunity, and a silent auction. The special featured guest is Keanna Garcia, named Queen Scheherazade for the 2018 Riverside County Fair & National Date Festival and this year elected College of the Desert’s Student Trustee. Keanna began her burgeoning performing career with Green Room Conservatory in 2009 at the age of ten, when she played the heroine in the melodrama Desperate Desmond’s Dastardly Deed.  She was a featured actor in ten other Green Room productions including Fiddler on the Roof; Oliver!; Mary Poppins; Thirteen the Musical; and You’re a  Good Man Charlie Brown. Keanna is also lead dancer for COD’s Ballet Folklorico Troupe.

Directing Sister Act is Founding Artistic Director David Catanzarite, an award-winning director and expert theatre educator with thirty-five years of teaching experience.  Catanzarite has directed more than 100 professional and college productions in New York, Los Angeles, Chicago, and Toronto, as well as in Europe and Africa.  He is currently on the theatre faculty at California State University, San Bernardino’s Palm Desert Campus.

Tickets are now on sale at www.greenroomtheatrecompany.org. Tickets are $20 for adults and $13 for students and seniors 63 years and over. In addition, two-for-one matinee tickets are available for July 25 by calling the box office at (760) 696-2546. Indio High School Auditorium is located at 81750 Avenue 46 in Indio.

Parents should note that Green Room is a family friendly theatre company, but never admits children 4 years and under to mainstage performances.

Green Room Theatre Company is a 501(c)(3) nonprofit theatre founded in 2009 by Board President Karen Lin and Artistic Director David Catanzarite to bring theatre, Broadway musicals, and non-traditional theatre performances to under-served communities throughout the Coachella Valley. In 2017 the company added Shakespeare to its repertory by founding Coachella Valley Shakespeare, which has now presented three successful festivals.

The company has produced a myriad of innovative projects in the decade since its creation, and works with adult performers and youth to bring first-quality theatre and education to our desert communities, including touring productions, staged readings, “site-specific” performances, and a thriving Shakespeare festival. Due to the continued growth of the company, this year the conservatory’s performances have moved from the CSUSB Palm Desert Campus’s Indian Wells Theatre to the newly renovated, state-of-the-art theatre at Indio High School Performing Arts Center.

After the big summer musical, Green Room’s tenth season continues with a lineup of Pulitzer Prize-winning Broadway dramas featuring many of the desert’s finest adult actors and directors. The regular season begins in October with recent Pulitzer Prize winner Sweat, by Lynn Nottage, followed in November by Paula Vogel’s How I Learned to Drive and then August Wilson’s Fences during February for Black History Month.  The season will conclude with a new one-act play festival in March, and the fourth annual Coachella Valley Shakespeare Festival in April.

The Conservatory training program will continue to offer classes throughout the year.  This unique program is led by a core of teaching artists who are credentialed professional educators with strong theatre, dance, and music backgrounds. Training is aligned with the California State Visual and Performing Arts Standards and the National Common Core Standards.

Marking another milestone, this year the conservatory was selected by Elite Academic Academy of Southern California to offer its remarkable summer program in partnership with Elite’s new Coachella Branch.  As a result, for the first time all Conservatory students are eligible to receive full-tuition scholarships to the summer program. Additional funding has also enabled the company to offer numerous paid internships for college and advanced high school students.   This season the Conservatory is also launching a technical theatre training program with hands-on experience in makeup, costumes, lighting, sound, projections, and set design.

The Green Room Conservatory program provides an unrivaled opportunity for students in our desert communities to grow with the guidance of expert teachers who are as passionate about the arts as they are knowledgeable.