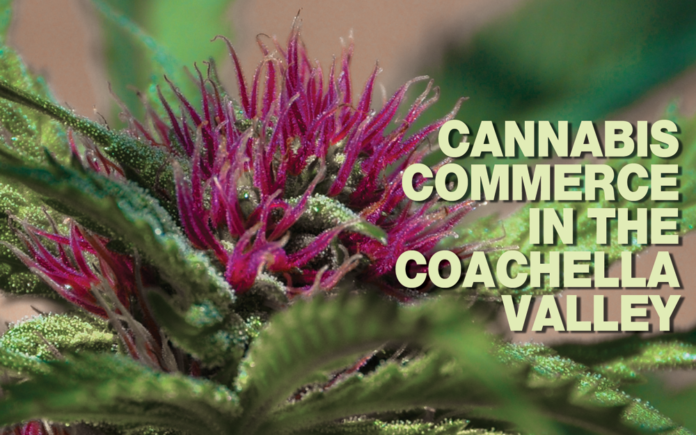 The Coachella Valley is expanding its horizons.

Already a premiere destination and global hot spot, the CV can now include the cannabis industry as a draw. For residents and visitors, cannabis commerce, along with music and art, creates an ideal trifecta bringing leisure and entertainment to an all-new high.

Ahead of the curve, the CV is poised to be a part of the budding, large-scale marijuana market, creating new businesses, jobs and a flowering economy.

Money generated in California last year from the legal cannabis industry is conservatively estimated to be $3.3 billion. Once adult consumption becomes openly legal January 1, 2018, that figure is expected to more than double within two years!

California is the eighth state in the country to legalize adult consumption, another 29 states allow for medicinal use — often the first step to total marijuana legalization.

The Coachella Valley and several of its cities are reaping the benefits as the cannabis industry grows, blooms and blossoms locally.

Even with 37 states embracing some form of legal cannabis use and with other states following suit, the federal government still considers marijuana a “Controlled Substance” and a “Schedule 1” drug – a list that includes heroin, methamphetamine and LSD.

The current administration has given no indication that it intends to move towards any form of decriminalization.

As influential as the state of California is, the federal government can still intervene in the state’s marijuana businesses if it so desires. And, as long as cannabis remains on the schedule one list, banking commerce, medical testing and university research remains illegal. These factors complicate the industry and create significant risk for local governments and legitimate businesses.

Currently, CV cities are actively taking the opportunity to carve out legal space for the cannabis industry, hoping to fill city coffers with much needed tax revenue as well as provide employment opportunities for their residents.

Medicinal marijuana has been legal in the State of California since 1996 under Proposition 215 the “Compassionate Use Act.” The City of Palm Springs was the first in the valley to recognize the community’s need for medical cannabis and allowed marijuana dispensaries to operate as cooperatives and collectives.

Medical cardholders, or those with doctor recommendations, will still be able to purchase medicinal marijuana after “adult use consumption” becomes legally sold. Some cannabis products will only be available to medicinal users, and the medicinal cost will be at a lower price point.

All nine valley cities are in the process of having to establish parameters for the selling, growing or manufacturing of cannabis and its related products as total legalization approaches.

Whether a community will allow cannabis within city limits or not, every city in the state is preparing for what comes next when marijuana is legal for adult consumption, or, commonly referred to as “recreational use” –for those age 21 and older.

Governor Brown recently signed the Medicinal and Adult-Use Cannabis Regulation and Safety Act (MAUCRSA), which replaced and repealed elements of the separately written acts for medicinal and adult use.

Tweaking and combining the regulations together, the new act provides more controls, distribution of power, public safety and environmental protection, to name a few. The document is over fifty pages in length.

Generally, MAUCRSA imposes the same requirements on both commercial medicinal and commercial adult-use cannabis activity, of course with some specific exceptions. Now licensing of all cannabis related businesses whether it’s selling, growing, processing, delivering, testing, or manufacturing will be under one roof.

As the laws are refined, local governments must wait and see how much authority or jurisdiction the state will continue to allow for licensing, enforcement and taxation.

As for personal adult use, when Proposition 64 passed in November 2016, it allowed adults 21 years of age and older to possess, transport, process, purchase, obtain or give away no more than one ounce of dry cannabis or eight grams concentrated cannabis for non-medicinal purposes.

Adults can currently possess, grow, cultivate and harvest no more than six live plants in a private residence and locked area out of public view.

Those 21 years of age and older can use, obtain, manufacture or give away marijuana paraphernalia to people age 21 or older.

For now, smoking cannabis is restricted to private property. It cannot be used in any form 1,000 feet of schools, day care or youth centers unless it is a private residence and the smoke is undetectable to minors.

Cannabis use and open containers of marijuana or paraphernalia while driving is prohibited just like alcohol. It’s illegal to consume while driving.

It is also illegal to manufacture concentrated cannabis — a method to extract and produce oil that requires using a volatile solvent — without a license. The CV has had numerous home fires recently where kitchen extraction has damaged property and endangered lives.

However, before you line up at your neighborhood dispensary, the state must work out all the details. And there are many! Dispensary owners do not anticipate licensing to be ready by the “legalized” date.

The deadline for the state to start issuing licenses to pot shops is January 1, subject to the Bureau of Cannabis Control. At this point, dispensaries can only sit and wait for state licensing to open.

The Coachella Valley currently has a total of 24 operating dispensaries in Cathedral City, Desert Hot Springs and Palm Springs with 38 in the process of approval. (See Weed Map for location and listing.)

The City of Coachella, Cathedral City, and Desert Hot Springs currently have six operational cannabis cultivators with 113 in various stages of approval.

At this time, the three cultivating cities combined are actively approving the development or have working facilities that total 9,129,234 square feet, or just over 209 acres, for the purpose of growing and manufacturing cannabis and cannabis related products. That is a fraction of the total available land and doesn’t include unlicensed, private, small-scale growers.

Building a platform for the cannabis industry to thrive within the cities has taken considerable effort. City council members and staff have worked diligently to ensure success for those choosing to open canna-businesses in their towns.

The City of Desert Hot Springs requires all canna-businesses hire 20 percent of their workforce from within the local community. 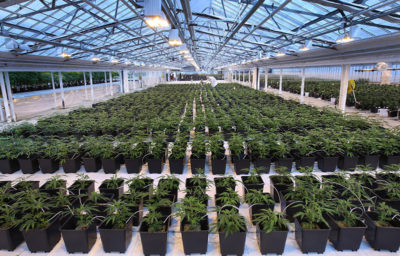 Without being able to borrow or obtain lines of credit from US banks, cash-flush entrepreneurs, speculators, and developers have literally secured private seed money to build state-of-the-art grow facilities, cannabis industrial centers and planned business parks in CV cities.

While many other small communities across the state hope to establish canna-businesses as a way to generate badly needed tax revenue, the Coachella Valley stands apart.

As more and more entrepreneurs choose the welcoming cities of the CV to start canna-businesses, what may make the most difference in the lives of those who live in the CV are the ancillary businesses required to support canna-commerce.

Like any other agri-business, marijuana growers require supplies such as pots, soil, fertilizer, etcetera, and rely on local utilities like water and electricity.

There is a multitude of canna-products made from the flower.

The oil from the weed is significant because it is used in so many medicinal and edible products. Refining and distilling the multi-facetted marijuana plant compounds to obtain or extract the oils or cannabinoids (CBDs and THC) requires significant equipment and expertise for large-scale production.

Besides real estate needs and agricultural suppliers, there are legal demands, product packaging, IT requirements, creative marketing, skilled management positions, security details, tour opportunities, cannabis schools, testing labs, paraphernalia providers and so on. Each comes with another subset of jobs — technicians, artists, printers, drivers, secretaries, accountants, cleaning companies and so, so much more.

Like any successful industry, local canna-commerce is poised to generate more work for the surrounding area.

As cannabis growers dig in, they hope to be able to meet the demand when adult consumers begin purchasing canna-products over the counter.

After adult consumption was legalized in Nevada, Las Vegas adult users hit the dispensaries, and product sold out faster than expected.

Local growers intend to refine canna-business practices and create more consistent artisanal strains that will appeal to a wider market of discerning consumers.

Dispensaries expect to continue building their businesses to meet the needs of their clientele whether it’s medicinal or adult use.

The valley’s canna-cities are certainly enthusiastic about generating tax revenue for their communities, and are equally excited about the wide-range of potential jobs for their residents.

California is one of the largest economies in the world and it’s about to become even bigger. The Coachella Valley is poised to be a significant player in the state, country and global cannabis market.

What wine is to the Napa Valley, cannabis can surely be to the Coachella Valley.