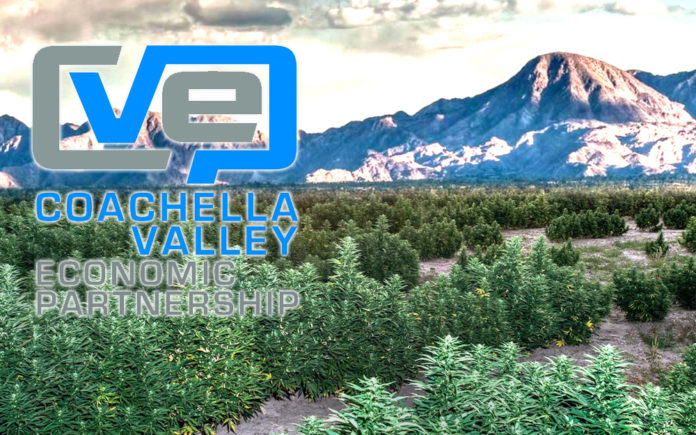 The marijuana industry is taking root here in the Coachella Valley. Cannabis businesses are popping up in four valley cities creating jobs, tax revenue and adding to the vibrant, hip Coachella brand.

The growing, selling, and manufacturing of cannabis and cannabis related products is highly profitable and with adult consumption legalized in the State of California, it is likely to further flourish when it can be purchased over the counter sometime next year.

The Coachella Valley Economic Partnership (CVEP) is a local organization dedicated to enhancing the regions’ economic strength and status through business promotion, collaborative industry, job training and education. CVEP has taken note, and is watching, anticipating, the economic impact the canna-commerce will have in our valley.

The cannabis industry is something CVEP has considered in its “efforts to achieve economic vitality for the region,” which is an important part of its mission.

“The move to legalize cannabis seems to be expanding and that may increase demand for cannabis based products,” said Wallace.

Mobile Farming Inc., a container agriculture business, was the first company admitted to the Palm Springs iHub, an accelerator campus, which Wallace helped launch, and is affiliated with CVEP.

According to Wallace, Mobile Farming Inc. is now Cultivation Technologies and is planning a large marijuana grow facility in Coachella.

“At the time, they were primarily using the shipping container grow units for high value food products like lettuce and peppers,” said Wallace.  “To that extent, CVEP and the iHub are responsible for the initial presence of this group of entrepreneurs in the Coachella Valley.  They seem to have moved on to a more lucrative agricultural product.”

The Coachella Valley’s leading industry is tourism, generating $4 billion a year. Agriculture is next with almost $1 billion in revenue.

In working to understand the nature of the canna-business and its potential fiscal impact, CVEP has spoken with community leaders in the State of Colorado — the first state to make adult consumption legal.

“Any impact from the sales of cannabis products will be heavily impacted by how many other regions decide to jump on the cannabis bandwagon,” said Wallace.  “There is the potential for massive oversupply if a substantial number of California cities go all in on cannabis.  A contact in Colorado has disclosed that some strains of cannabis have seen price decreases by as much as 75 percent in just two years.”

However, for cannabis users, medicinal or otherwise, lower prices might be considered a good thing, and could deter black market marijuana sales.

Fifty dispensaries were unable to supply enough marijuana to meet the demand of their customers. The Governor called for a “statement of emergency” to allow more dispensaries to be licensed!

Here in the Coachella Valley there are 24 dispensaries already open and another 38 following suit in the next several months. Cultivators are digging in with six growing facilities operating 24/7 with another 113 working daily to get up and running.

The local cannabis industry is on track to create jobs and employment opportunities for valley residents over the next decade.

No person or any organization has been able to say what the potential economic and fiscal impact may be to the valley as canna-commerce buds.

“It is too preliminary to speculate about with any accuracy,” said Wallace. “The one thing that is certain about any ten year projection at this point in time is that it will not be correct.”

As of now, four of the nine cities are allowing some form of canna-business. After adult consumption goes into effect in January, more valley cities will consider allowing cannabis operations whether it’s a neighborhood dispensary or cultivation in designated industrial areas. (See CVW Cannabis Cities.)

“One question is how much of the demand is already being met in the illegal market,” said Wallace.  “The size of the cannabis market will most certainly grow with legalization, but the amount of growth may not be as high — no pun intended — as some are expecting.”

As with any industry, there are the ancillary businesses that serve it, creating more opportunity for valley residents.

“Every grow operation involves commercial real estate, light delivery, fertilizer management, water delivery and management, packaging and logistics,” said Wallace.  “This is where the better jobs will be and this is where the opportunity for economic vitality really lies.”

Currently, CVEP does not have any cannabis entrepreneurs on their board or as investors.

“We have spoken with a few and attended a seminar in Desert Hot Springs,” said Wallace. “At this point in time, we do not have any ‘ganjapreneurs’ on our board or in the iHub program.”

In November, CVEP will hold its annual “Greater Palm Springs Economic Summit” where the organization highlights and summarizes the economic status and looks ahead at the needs and changes here in the valley.

“Expert speakers on this topic with experience backing them are hard to find,” said Wallace.  “I think in the future there is a certainty that it will be addressed but this year may be too early.”

The organization has yet to decide if it will include the cannabis industry on the agenda at the summit.

So for now, CVEP may wait and watch, as the valley’s local cannabis industry puts down roots.

With the addition of a potentially prosperous cannabis industry, the CV’s popularity and economic status is also growing. In fact, anything “Coachella” now has a wider brand value.

It has yet to be determined if the Coachella Valley’s emerging cannabis commerce will be considered part of the valley’s agriculture or tourism industries. Or both. And, how will cannabis further shape the valley’s economy? Could cannabis one day become the valley’s most lucrative industry?

“Cannabis is illegal at the federal level, so there are issues with bank transactions and transport of products across state lines,” said Wallace.  “It will take many years for this to stabilize and reach a level of being a mature and predictable business model.  The time when there may be a drive up window where the fast food worker asks, ‘Would you like a joint with that’ is many years into the future.”

But for some, the future is already here.