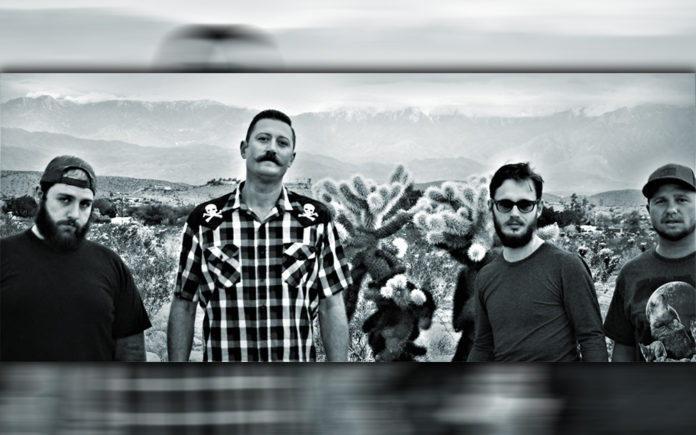 ‘INTO THE GRAVE’ ALBUM REVIEW

No longer a phantom ship, Captain Ghost has drifted into the ears of many Coachella Valley rock music fans with the release of their album, Into the Grave. The album was released in 2019 on Ghost Crew Records and consists of 10 songs at 32 minutes in length. The LP was recorded at Room 9 Recording Studio in Redlands, California by Jerry Whiting (SANGRE, ROBOTIC HUMANS, SLEAZY CORTEZ). The record is what alternative desert rock music is supposed to sound like; it’s gritty and straightforward from start to finish.

Captain Ghost is Bradley Burton (lead vocals and guitar), Corwin Hendricks (drums), Mikey Hendricks (bass) and Nick Hales (lead guitar). The band has supported the album since its release by performing all over SoCal and into Nevada and Arizona. You can see them perform next at Tack Room Tavern at the Empire Polo Grounds for the 12th Annual Concert for Autism on Saturday 10/19.

This is the Coachella Valley Weekly album review of Into the Grave.

Loving the left to right channel Spaghetti Western sounding ominous guitar intro. The drums dispense into a driving tempo. Lyrics: “I know this world can get you down…” The cautionary tale of earthly stress. Hale’s guitar is at the forefront here. The fade out is a lost art form used here on the first song.

The first recording I heard by Captain Ghost was played on 93.7 KCLB and is also their first video shot in Sky Valley, CA. The fuzz of guitar and ride cymbal create an uncommon crescendo. A great introduction to what they are trying to accomplish. It’s admirably up-tempo and keeps its timbre until the breakdown and outro. Lyrics: “They poison our skies, they poison you and I, they poison our food and our water too…” The video is a black and white performance video scattered with what Mikey shared as, “Iconic imagery to portray and push the concept forward.” The intro image says it all, “If war gas is used by the enemy against the civilian populations its primary purpose will be to cause fear and panic.” (Prelinger Archives. What to Do in a Gas Attack).

With a solemn guitar strumming intro and a cultivated guitar/bass hook with parallel vocals, the song is “true” Captain Ghost. Another great Hales’ solo that takes the song out “…from a very dark place.”

A cool finger picking intro with groove-oriented bass and drums. To raise the flag is to signal distress and alert about potential danger. Captain Ghost plays conscious rock that has a soul and significance.

Corwin’s drum intro hits you like bullets. That Alternative Rock sound speaks loudly here. I think this is my favorite track on the album or at least in a tie with Poison Skies. Lyrics: “Don’t forget me, when I say, I love you, I know I won’t forget you, when you say, I love you too.” Impassioned lyrics from the sentimental mind of Burton.

Glorious acoustic intro. Lyrics: “Time won’t wait for me, time moves slow.” The song is a semi-ballad slow-tempo nod that impresses opportunity knocks infrequently. I believe I hear a mandolin and Burton’s vocals are the highlight.

Captain Ghost does not shy away from political issues or in this case, the misleading news agencies. The music takes a backseat to the message here. The song is catchy with an observation on the agenda of news corporations and their leanings. Lyrics: “Watch the talking heads engage in conversation. Spreading rumors that they know just are not true. If they need anything, I think it’s a vacation. They never come back from.” That’s as direct a message as you can get.

Probably the heaviest song on the album with an intro guitar sound reminiscent of Metallica. Lyrics: “I will try and fight it, and you know I will. I’m not ready to die yet, you know I love you still, and I always will.” Burton is as melodious as he is imaginative.

A considerable bass intro from Mikey with a teasing syncopated Ska beat. Captain Ghost shows off their mixed bag to play a song that’s danceable. Lyrics: “Like it’s the last day on Earth…” We should all live like this.

The finale grasps a sweeping tempo; a great guitar-driven song and closer to their debut album. Lyrics: “Mirror, mirror in my head…visions, visions inside my head…” Let’s hope the mirror and visions echo to Captain Ghost that they are on the righteous path.