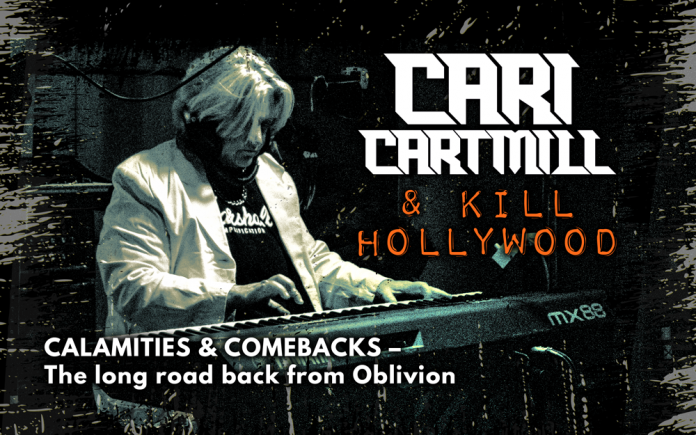 It is often acknowledged that old habits die hard, and a deep-seated passion can only remain silent for so long before being shared with the world again. After a 10-year hiatus from writing, performing, and recording music, seasoned rocker Cari Cartmill is fronting a band once again. After relocating from Los Angeles to Palm Desert in 2011, Cartmill spent time putting her band back together around 2018, spending the first year building a repertoire as well as drawing on Cari’s song catalogue to determine which ones the new band wanted to record and perform. In November of 2020, Cartmill released the album, KILL HOLLYWOOD. Cartmill and her band are currently in post-production for a KILL HOLLYWOOD EP, “Calamities  & Comebacks”. The first single, “Underwater Girls,” is scheduled to drop on July 4. 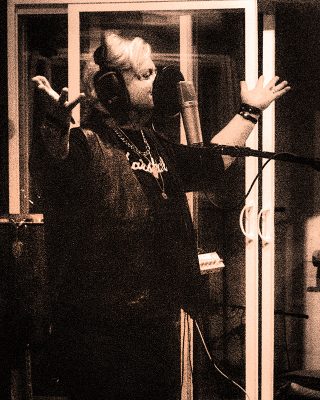 “The best part of recording my music is literally just being back in the saddle. The reaffirming validation I get from writing, recording, and working with mates on a shared creative project is extremely gratifying, especially after 10 years away from music—which was the hardest thing to walk away from ever. A huge bonus is finding the right people, and a co-producer and bandmate who is the best engineer I’ve ever met. David Williams has me in my musical happy place,” explained Cartmill.

The band consists of Cartmill on vocals, keyboards, and rhythm guitar; Dave Fernandez on percussion; Armando Flores on bass; and David “Cash” Williams on guitars, mandolin, and backing vocals. Williams also engineered and mastered the new recordings, along with producing beside Cartmill. The tracks were recorded at Gatos Trail Recording Studios in Joshua Tree and Melrose Music Studios in Palm Springs. Videography for the band was provided by Kurt Schawacker. 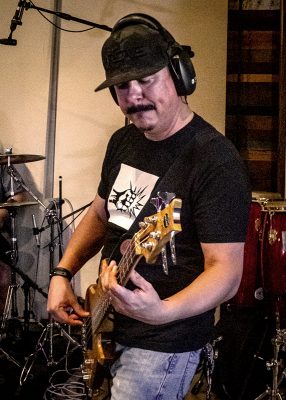 Cartmill began her foray into music when she started playing the trumpet in fourth grade, which became her principle instrument until college. Her first professional gig was at only 16 years-old with Linda Lee & Passion as a trumpet player and backing vocalist. She also played in Arthur King’s horn section and sang back-up with Bob Wills Jr. and the Texas Playboys. Her private horn teacher suggested Cartmill audition for admittance to Berklee College of Music. She left Boston and returned to California, where she immersed herself in forming her first original band, The Hunger in LA and later, Fooling Marie, in San Francisco. For the next two decades, Cartmill performed extensively on the West Coast and Southwest United States. 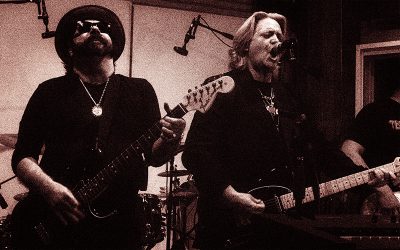 “2020’s album, KILL HOLLYWOOD, was very different than our current EP’s production process. In 2020, I used three studios and, due to the COVID situation, was slow and I felt very isolated creatively. I found it harder to focus on music in part due to the stress from the pandemic’s restrictions. The EP has been more relaxed and working with David Williams as my co-producer and lead guitarist has really helped me concentrate on my performances and the songs with time to polish and explore the material. My bandmates have also played with a great energy and creative focus that has me very excited about the songs in the oven for the EP. I think we are all feeling reinvigorated and energized by the ending of the pandemic,” stated Cartmill.

Cartmill’s style as a songwriter is eclectic and depends on if the song’s initial idea was set to a piano or guitar to affect the overall style. The songs will vary from a late 60s to 70s “Big Arena Rock” British-influenced vibe to a more “American straight ahead California Rock” feel. Cartmill cites Elton John, Paul Westerberg, Bono, Elvis Costello, and Bruce Springsteen as some of her musical influences. Themes of redemption and tenacity are present in the record, with a dash of optimism and love thrown in for good measure. 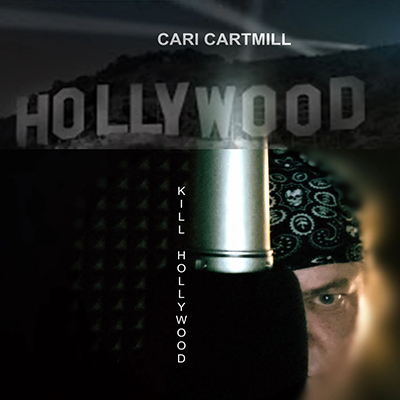 “Sometimes the writing process is like a root canal with a rusty spoon and sometimes it is all there under my fingers and on the tip of my tongue. But more often, I start with a chord progression idea and from the progression I develop the melody with the lyrics coming in last. One of my favorite tracks is ‘Irish Blue,’ which is my first love song. It is so different from anything I’ve written before and I’m really proud of my piano part. I’m a self-taught pianist, so writing piano parts has never come easily to me. The idea David Williams had of adding a mandolin just works and makes my heart sing with Irish joy! ‘Six Days In India’ and ‘Underwater Girls’ are really fun to play and sing as well,” stated Cartmill. 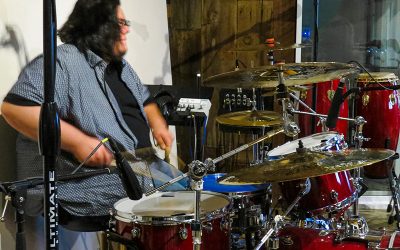 Cartmill has adhered to the advice that a musician does not need to learn everything the hard way and it is important to be authentic and practice as much as you can. She also believes that it is key to write what you know about the best and what sounds best to your ear before you seek out the opinions and input of others. 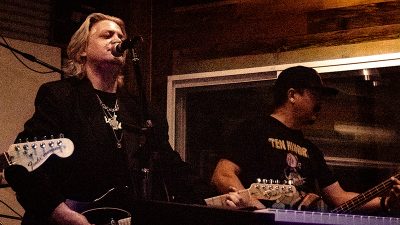 “I used to have such grand aspirations and ideas of what my showbiz career would be like. I just want to get back to live performing and keep working with my mates to make KILL HOLLYWOOD a band that people look forward to hearing live while also getting to know Palm Springs and the Coachella Valley’s music community. Audience is a major focus this year for me. Releasing and working hard to get my music heard by as many people as I can moving forward is number one. I’m ready to take whatever comes from that,” said Cartmill.