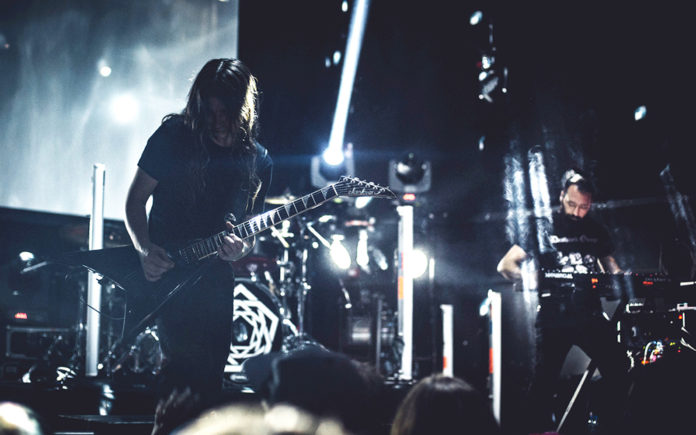 Carpenter Brut- Synthwave sounds from Poitiers, France play like a soundtrack to an 80’s horror film, filled with heavy metal riffs and rock pounding adrenaline wrapped in laser beams and flickering neon lights. Experience the greatest cult film you’ve never seen with a brass knuckle switchblade clenched in your hand ready to fight RoboCops and dangerous villains with leather-clad heroes and vamped up vixens with primped hair and defining make-up. If you join forces, together you will overthrow the evil empire and restore hope to the people who must find a new super soldier to believe in before the world collapses into eager hands. Earlier this week, I had an opportunity to ask the mysterious man behind the music a few questions.

CVW: Thank you for taking time to speak with us. You are creating genre-bending music and shaping film art through brilliant collaborations. How do you describe your music, what genre do you call it?

CARPENTER BRUT: At the very beginning of the Carpenter Brut project I use to answer “electro rigolo” which means in French “funny electro,” but people kept telling me ‘but you can’t answer that, it doesn’t sound very serious,’ as if you had to be serious to make music and especially as if you had to belong to some kind of family or parish to be credible…anyway…Personally, I’ve always hated music labels, being in a music drawer… I don’t like that especially since it narrows your field of action. So I’d say I play funny 80’s electro sounds with 2000’s material.”

CVW: Where does this sound come from? What bands influence your music?

CB: “This sound comes from the fact that musically speaking I didn’t like what I was listening to anymore. Coming from the metal scene and I found that the genre was not renewing itself anymore, that it was going in circles and then there was this very angry electro band, Justice, who brought this kind of renewal that I personally was waiting for; especially with their track “stress,” which for me was the starting point for Carpenter Brut. I said to myself ‘why not try to take this kind of music and sound to an even more aggressive and violent level while keeping a touch of fun.’ There are many bands that influence my music: Justice, Toto, Pink Floyd, Supertramp, NIN, Judas Priest, Iron Maiden, to name a few.”

CVW: How did you decide to collaborate with Seth Ickerman on the music video ? Are more collaborations in the works?

CB: “Seth Ickerman had actually contacted me 3 years ago by email to know if they could use my music (“hang’em all” track) for a trailer they had made for a French science fiction festival. I didn’t know these guys, and when I inquired about their work I discovered little geniuses who with little material and financial means were capable of great things. I really liked their way of working, their savoir-faire and their attitude; real enthusiasts and real pros. So we linked contact; they loved my music and I loved theirs, that’s how we naturally decided that we had to collaborate together on other projects. From there was born the video clip “Turbo Killer” and their next medium-length film for which I’m composing the soundtrack.”

CVW: You seem to blend a cinematic feel into your music and the music videos reflect a blend of film genre as well. What films inspire you?

CB: “Cinematic and visuals have always been very important in Carpenter Brut project, thanks in particular to Silver Strain who edited all the videos screened in concert and who edited the video clip “le perv,” among others. Silver Strain is a science well for all Z-series filmography and other Giallo movies. He has made a significant contribution to the project. Then there is also my collaboration with the illustrator duo Fortifem, with whom I work from the beginning, too. They created the Carpenter Brut logo, (aka ”Brutagram”) and they design all our merchandising and artworks for Trilogy & Leather Teeth albums.

I do think that it is this imagery around Carpenter Brut, beyond music, that has contributed to making Carpenter Brut a project in sound and image; offbeat and flirting with bad taste. As for the movies that inspire me, I would say that they are mainly the movies I watched when I was a kid: Friday the 13th, Evil Dead, Halloween, Maniac Cop etc.”

CVW: What intrigues you about 80’s film and culture?

CB: “To have grown up in the 80’s and from the point of view of the kid I was at the time, I would say that the culture of the 80’s was the period of everything allowed, of excess, extravagance, creativity etc…. There seemed to be a lot of carelessness at that time and the studios still had the freedom to create, to have original scenarios. Today it feels like nobody takes any more risks, that it became the era of remakes and reboots.

No one wants to take any risk not to lose money… the money took the step on inventiveness and creation. I find it hard to believe that nowadays films like Indiana Jones, Ghostbusters, Back to the Future etc… can see the light of day. Now producers and studios prefer to take the old recipes that work (guys with superpowers) and make them franchises…sad.”

CVW: How do cult films and B-movies inspire you? What can we learn from this aesthetic that we may be missed in the 80’s?

CB: “For the reasons given just before: freedom, creativity, extravagance, originality.”

CVW: Are there any books that have influenced your musical ideas?

CB: “1984 by George Orwell. It is a book that has left its mark on me and which, without being a source of inspiration remains a source of questioning about the future.” 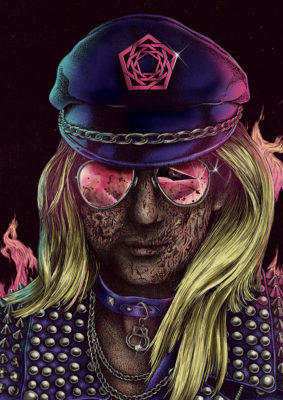 CVW: You have also been involved with several film soundtracks. How do you approach music for film versus how you make music for live or recorded performances?

CB: “I would say that composing music for a film is easier than composing an album. On a film, music you have to compose on a given scene, which already brings clues on the musical content that it will have. Overall, on a movie, you are driven by the scene and it is up to you to find the appropriate sound. You’re kind of directed by the movie.”

CVW: Is it a challenge to translate the multi-sensory aspects of your music when performing live?

CB: “No, I don’t think so, I think that on stage, having two extra musicians with me (a guitarist and a drummer) brings that little extra that doesn’t exist on my studio albums. The scenography also plays a major role in live shows, so I think we’ve managed to capture the atmosphere of my music when performing live.”

CVW: Are there bands at Coachella that you are interested in seeing?

CB: “Jamiroquai. I love his music, I often watch his live shows on YouTube and every time I’m amazed, this guy is a stage beast and he’s super well surrounded on stage with very talented musicians.”