“Uncontainable, exquisite to the detail, hypnotizes people, robs them of their social graces, swarming to your glow, burning you with razors.” That’s case/lang/veirs, they are singing about an elusive object of affection on their song “Honey And Smoke.” But they could just as easily been describing the effect their music has on anyone who listens.

It’s tempting to view case/lang/veirs in the same light as Trio. Nearly 30 years ago the collaboration between Emmylou Harris, Dolly Parton and Linda Rondstadt made history when they released their self-titled debut. A seamless blend of their Country and Rock sensibilities, the album shot to #1 on the Country charts and #6 on the Billboard Top 200. It also yielded a #1 single, their Countrified take on the old Phil Spector hit, “To Know Him Is To Love Him.”

Despite it’s somewhat utilitarian name, case/lang/veirs is also an organic match-up of longtime friends, Neko Case, k.d. lang and Laura Veirs. But their sound is less a Country-Rock mash-up, hewing more closely to the quirky sororal style of the Roches, or the lush harmonic convergence of Crosby, Stills & Nash or Fleet Foxes.

k.d. lang is probably the best known performer in this silvery sorority. Born in 1961, she grew up in Alberta, Canada. Although she was always musical, she didn’t really find her voice until she was in college. Preparing for a theatrical production based on the life of Patsy Cline, she realized she had found her muse and immersed herself in the late Country singer’s music.

Forming her band, the Re-Clines, they quickly made a name for themselves combining camp performance art, Rockabilly rhythms and her incredibly powerful mezzo-soprano voice. By 1986 she was signed to Sire Records, (home to the Ramones, Pretenders and Madonna). The following year, her major label debut, Angel With A Lariat arrived. Although it was immediately embraced by college radio, Nashville was a little slow in appreciating k.d.’s exuberant charms.

That would all change in 1988 when she convinced veteran producer Owen Bradley to helm her next record, Shadowland. Best known as the sonic architect for hits from Patsy Cline, Loretta Lynn and Brenda Lee, he pared down k.d.’s eccentricities and highlighted her protean voice. The gamble paid off and Music City could no longer ignore her talent, the album shot to #8 on the Country charts.

k.d. quickly realized the narrow confines of Country couldn’t contain her creativity. Her third album, Absolute Torch And Twang returned her sound to the wide open prairies of Western Canada. This time she hit #12 on the Country charts, #69 on the Top 200 and won a Grammy for Best Country Female Vocal.

In 1990, an intense need to feel comfortable in her skin led k.d. to not only come out as a proud lesbian, but she also announced she was a devout vegetarian. It was hard to determine which admission was more alienating to the Country Music establishment! But she no longer sought their approval, she was already headed down another musical path, two years later she released her landmark album, Ingénue.

More torch and much less twang, the record was inspired by a devastating case of unrequited love. Her style now was more easily aligned with Dusty Springfield and Julie London, less Country and more Cabaret. It was a huge hit, reaching #18 in the Top 200, garnering six Grammy nominations and winning one for Best Pop Female vocals.

Although her career has never hit that same pinnacle, k.d. has continued to write, record and tour. The remainder of the ‘90s saw the release of the sleek All You Can Eat, and the sultry Drag. At the turn of the 21st century the Bossa Nova bliss of Invincible Summer arrived, followed in 2004 by Hymns Of The 49th Parallel (a salute to Canadian songwriters). In 2008 she released Watershed. Three years later she not only returned to her Country roots with Sing It Loud, but it was also her first band collaboration, (with the Siss Boom Bang), since her Re-Cline days.

Born in 1970, Neko Case grew up in the Pacific Northwest and escaped a desolate adolescence by embracing the Grunge scene. She spent her college years in Vancouver, B.C. before she began pursuing music full time. Her debut, The Virginian was released on the tiny Mint label in 1997. Follow-up efforts, Furnace Room Lullaby and Blacklisted seemed to cement her sound, best described as “Country Noir.”

After she released a live album, The Tigers Have Spoken, in 2004, her studio albums grew more ambitious in scope. 2006 saw the release of the stunning Fox Brings The Confessor record. Three years later she doubled down with the brilliant Middle Cyclone. By turns, heartbreaking, sardonic and heartfelt, it debuted at #3 on the Billboard Charts and received two Grammy nominations.

Suffering a bout of depression following the deaths of her emotionally distant parents, her next album, The Worse Things Get, The Harder I Fight, The Harder I Fight, The More I Love You, had a gestation period almost as lengthy as its name. But again, she delivered a varied and complex set of songs, garnering a Grammy nomination for Best Alternative Music Album. Two years later she returned with the career retrospective box set, Truckdriver, Gladiator, Mule.

Laura Veirs is the least known voice in this tuneful triumvirate. Born in 1973, the Colorado Springs native kind of took music for granted as a kid, her passions were focused on nature, and geology. While she was attending a rural college in Montana she began playing in local female Punk groups. Following matriculation, she relocated to Seattle in the late ‘90s. She began to pursue a career in music, supporting herself as a gardener and ESL teacher.

Borrowing a bit of DIY ingenuity from the Punk community, Laura began self-releasing her albums. Her self-titled debut came arrived at the turn of the 21st century. Blurring the lines between Folk, Pop and Country, her music showcased her wide ranging vocals and idiosyncratic compositions that referenced geology, science and space as often as love and relationships.

On her second album, The Triumphs And Travails Of Orphan Mae, she hooked up with producer Tucker Martine. He has been by her side ever since on seven subsequent albums, Troubled By The Fire, Carbon Glacier, Year Of Meteors, Saltbreakers, July Flame, Tumble Bee and Warp And Weft.

Along the way Laura and Tucker married and are parents to two small boys. They currently reside in Portland, Oregon. Coincidently, k.d. lang splits her time between Portland and her native Canada.

She and Neko added vocals to Warp And Weft and it was then that k.d. proposed forming a band together. She envisioned a sound that mirrored the trio’s Punk Rock roots, but once they began collaborating in earnest the end result was something very different. 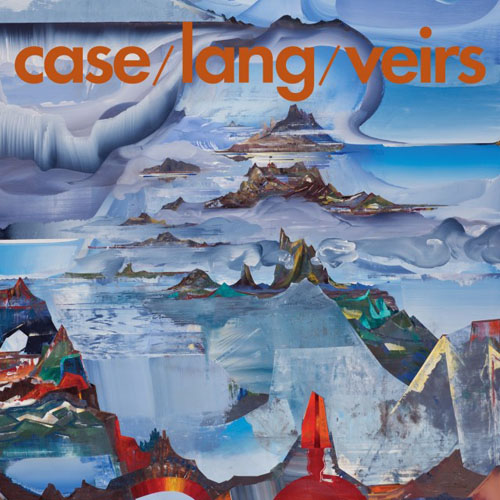 The album opens tentatively with “Atomic Number. The hushed instrumentation, just spare guitar and a thumpy beat, allow the listener’s attention to focus fully on vocals. They each offer a declaration of independence; “I’m not the freckled maid, I’m not the fair-haired girl, I’m not a pail of milk for you to spoil.” The lush, symbiotic harmony that pours out of the speakers, best be described as musical ambrosia.

Like a distaff Crosby, Stills and Nash, this triad splits lead vocal duties while the other two act as a mellifluous Greek chorus. k.d. stands out on “Honey And Smoke,” “Blue Fires,” “1000 Miles Away” and “Why Do We Fight.”

The aforementioned “Honey..” is a languid blend of Girl Group “oohs,” rippling castanets and fluttery rhythms as k.d. parses the rituals of seduction, safe from the sidelines. The piano-driven “Blue Fires” shares some musical DNA with “Sylvia Plath,” a deep cut from Ryan Adams’ epochal Gold record. It’s torchy perfection as she wonders “how do blue fires burn in me, yet not in you?”

“1000 Miles Away” offers another treatise on obsessive love. Here the arrangement of cello, viola and violin echoes the painterly grace of a classic Burt Bacharach track. Once again, k.d. is on the short end of the romance stick; “I saw a light in your eyes, it was the animal kind, all fierce and bright/Now every color fades, I’m out in the snow, in your golden glow, I feel no heat, from my feet to my face.”

Neko’s songs are slightly less intense. “Delirium” is a loping charmer, named after a brand of fireworks. Threaded through dense instrumentation are sitar-like guitar licks and a Spector-esque chorus. “Behind The Armory” is slower and more contemplative, recalling the pastoral elegance of Nick Drake. Neko’s soaring vocals weave between a tapestry of viola, cello, violin and guitar. Although she’s ready for love she’s not prepared to let down her guard; “Behind the armory I will never let you see, behind the armory still I want you to love me.”

“Supermoon” is equal parts spiky and yearning. Swirly acoustic guitar collides with an opulent string section and prickly baritone guitar notes. A kaleidoscopic roundelay that ponders the phenomenon of Perigee Syzygy, and our extended life expectancy she notes “Nature isn’t magic, it’s just a mystery to us.”

Finally, the Jazzy “Down I-5” is powered by a kick-drum rhythm twinkling piano and pin-prick guitar licks. The lyrics sketch out a vivid travelogue that celebrates both the provocative and prosaic sights along Interstate Five.

Although Laura has the lowest profile in this talented troika, two of the album’s best songs, “Song For Judee” and “Best Kept Secret,” feature her front and center. Much like “Carol Kaye,” her tart and loving ode to the Wrecking Crew bassist, both of these songs are tributes to real (unsung) musicians.

The former is a warm and tender encomium for obscure Folk-Rock singer, Judee Sill. The first artist signed to Asylum, David Geffen’s boutique label in the early ‘70s, she struggled with heartbreak and addiction until she was found dead in her car in 1979. But she also made two wonderful records, Judee Sill and Heart Food.

Gossamer harmonies envelope strumming guitars, dropped piano notes, cello accents and a shuffle rhythm, acting as a musical balm that almost mitigates Judee’s harrowing story. “You wrote “The Kiss” and it is beautiful, I can listen again and again…You never talked about your past, about the drugs and walking in the streets/They found you with a needle in arm, beloved books strewn around your feet.”

The latter is a pimped-out slice of ‘70s AM Pop perfection. Swoony, Love Unlimited-style strings dovetail with Tijuana Brassy horns, jangly guitars and peppery vocal gymnastics. This sunshiny confection pays homage to Silverlake musician Tim Young. An incredibly versatile guitarist he’s fronted bands and acted as a sideman and session player. Here Laura declares “Oh you can sing and you can really play, You’re the real thing and your heart’s in the right place.”

Other interesting tracks include the modal Jazz of “Greens Of June” and the choral carpe diem of “I Want To Be Here.” Aside from “Atomic Number” this is the only song that features the triad completely synthesizing their beatific blend instead of trading verses. The album closes with the surprisingly muscular “Georgia Stars.”

As wonderful as the combination of Neko Case, k.d. lang and Laura Veirs sounds on paper, nothing can prepare the listener for the gorgeous music contained herein. The three have hinted that this may just be a “one-off,” and k.d. lang has actually gone on the record stating after 35 years in the music business she is contemplating retirement. Either way, “case/lang/veirs” is one of the best records of 2016.