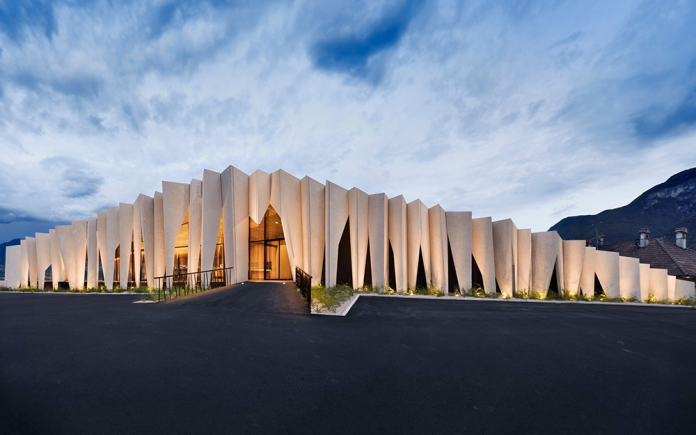 Alright! You loyal readers know that I hate dropping famous names that I rub shoulders with, in our wide wild world of wine, especially during the past pandemic times.

I didn’t report this news to you because—well, I’d have to mention a celebrity couple and you would think I was putting on airs. But I was invited to attend the 120th Anniversary Party to mark the opening of Cantina Kurtatsch’s spectacular new winery over in the Alto Adige region of in northern Italy—also known back in the day as Tyrolia!

Because of all of the pandemic problems, unfortunately, but fortunately, the party was not cancelled, but rather, it was postponed. Well—as you’d expect, my travel plans got all messed around and I ended up flying over to Bangkok. Not really—but it could have happened.

Anyway, we were all so enthused to party over at the new winery, with its new cellar—a striking façade made of dolomitic rock effectively doubling the size of their winery; and, giving the Cantina not only a new barrel cellar but also five storage halls, a new shop and a five-story ‘terroir walkway’ as part of the visitor center.

So things didn’t work out, but the winery was so understanding and generous that they sent me over some of their world-class wine that bespeaks quality and quality again. Here’s a little PR from the winery itself:

“Steep locations require a lot of work, sweat, and devotion, but they certainly also have their advantages. Thus 190 hectares of cultivation area are divided among the same number of members of the Cantina Kurtatsch at elevations from 220 to 900 meters – and all of that in just one community.

“That is unique in all of Europe. And this winery also holds another record: Andreas Kofler is responsible for the young and dynamic team, and he took the helm in Cortaccia at the age of just 32 as the youngest president in the history of Alto Adige cooperative wineries. “In our vineyards, every grape variety finds its optimal location, its ideal terroir,” Kofler says.

“The lower locations are among the warmest in Alto Adige and are ideal for Cabernet Franc, Cabernet Sauvignon, and Merlot. “The soil composition between Cortaccia and Termeno is completely similar to that of Pomerol in France,” the president explains. But up to 900 meters, on the other hand, grow varieties that prefer to have things cooler and airier and thrive best on calcareous dolomite soils – following the strictest guidelines for sustainability.

With a firm commitment and great respect for nature and resources, that is how unmistakable terroir wines that are strong in character are created at the Cantina Kurtatsch. “They each reflect their location without embellishment,” Kofler says, as he also tips his hand on the simple recipe as to why that is so: “In the winery, we just let the wine reveal itself.”

Cantina Kurtatsch—also known as Kellerei Kurtatsch since Alto Adige/Südtirol is a bilingual region—is one of the oldest and smallest wine co-operatives in a part of Italy where co-ops play a major role.

The co-op’s 190 members farm just 190 ha (470 acres) of vines at elevations of 220–900 m (720–2,950 ft). As they explain in a recent press release: ‘The very warm, steeply sloping sites have clay and gravel soils and temperatures that reach up to 40 ºC (104 ºF) in the summer, ranking them among the hottest places in Italy and rendering them ideal for the production of top international red wines.”

This gives them a happy combination of pure, ripe fruit flavours and freshness, with an intelligent double focus on well-priced wines, such as the Caliz Chardonnay and the Lagrein, as well as the single-vineyard wines where site-and-variety partnerships are well established, and which express their place of origin.

The majority of their wines showcase a single variety, but the delicious Amos white is an exception, made mainly from Pinot Blanc, Chardonnay and Pinot Grigio plus smaller amounts of Kerner, Sauvignon Blanc and Müller-Thurgau, all grown in exposed sites in the Cantina’s highest vineyards.

And now: some wine reviews from Master of Wine, Julia Harding.

Cantina Kurtatsch Pinot Bianco 2019 Alto Adige. ($26). “This smells a little lighter than the Pinot Grigio with more apple than pear but has real intensity of fruit and fresh melon, plus the white mushroom I often find on Pinot Blanc from Alsace. There’s also some citrus and gentle notes of white blossom –lightly scented rather than heavily perfumed. But it has real depth and length. Fresh, long and rounded on the palate. 13.5% ABV.”

Cantina Kurtatsch, Kofi Sauvignon Blanc 2018 Alto Adige ($22). “This is sophisticated Sauvignon. Aromas are hereby, citrus, grassy and just slightly smoky from a reductive edge, I think. That same mineral/smoky character on the palate alongside deliciously ripe and fresh fruit. This combines the gloriously ripe, intense and aromatic fruit of the region with excellent freshness.

As sophisticated on the palate and the long finish as it was on the nose. Very well made, with restraint in the use of oak and generosity in the lees texture. 14% ABV”

Cantina Kurtatsch, Brenntal Gewurztraminer 2017 Alto Adige ($25). “Full, rich and exotic. Intense, benchmark Gewurz aroma of burnished gold, rose petals and lychees. Spicy, full-bodied, mouth-filling and long and manages to be fresh on the finish. A real classic for this variety, very well made. Balanced in its extreme characteristics. 14.5% ABV”