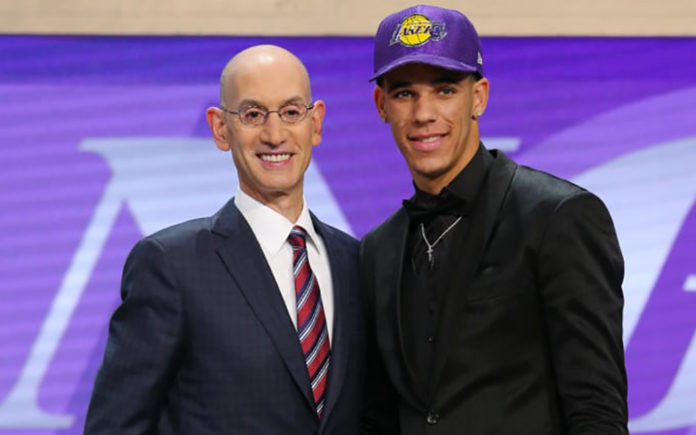 Moments after the Los Angeles Lakers selected UCLA guard Lonzo Ball with the No. 2 overall pick in Thursday night’s NBA draft, Ball’s outspoken father, LaVar, made a bold proclamation on national television.? “He has the talent to be an All-Star”. In a single breath, Johnson anointed Ball “the new face of the Lakers” and “the guy who will lead us back to where we want to get to”. “I’m not insane. I know it’s going to take time to build and we’re building, but when we get the right people in here, we’re going to win”.

Hall of Fame basketball player Magic Johnson, who is the new president of basketball operations for the Lakers, said last month that he would not let such controversies dissuade the team from picking Lonzo Ball and held true to his world in Thursday’s draft.

Those moves should give the Lakers close to $60 million in significant cap room next summer – enough to potentially sign two max-salary players.

Will Russell, only 21 years old, blossom in Brooklyn and make the Lakers regret giving up on him? When the Patriots offense is operating at its highest efficiency, Brady is getting the ball out of his hands quickly to playmakers like Julian Edelman, Danny Amendola, Rob Gronkowski, Dion Lewis, and James White.

“Magic Johnson is one of the greatest players to ever play… he’s the best point guard to ever play, so I can learn a lot of things from him”.

“I talked about that with coach Walton”, 2nd Overall Pick in the draft, Lonzo Ball said.  “The right people are in charge” he continued on via the ESPN draft Podcast. This made me smile. An athlete finally saying he’s got a lot to learn and will look up to the players before him to help guide the way. Smart and mature. Players that are chosen number two overall are expected to be cornerstone players for the next decade. Ball was asked about what will be different next summer, since he’s essentially betting on himself to turn their fortunes around.

During the Laker media day Lonzo Ball continued with his humble appreciation of his storied surroundings. When asked “What it feels like to be a Laker”, Ball looked up at the rafters and the retired jerseys of former legends. “Baylor, Goodrich, Abdul-Jabbar, O’Neal, Worthy, West. Johnson. Do you see it? Okay, then. We’re fine. We want expectations. I’m happy. I’m excited.

This is what 76ers, Lakers fans have waited for.”

Distractions from the Lavar Ball (Lonzo’s outspoken father) aside. Lonzo comes across as a gifted athlete who by early accounts, “Gets It”. Despite dad’s early prediction of the Lakers making the playoffs in his son’s first season, Lonzo seems grounded in appreciation for the moment. That’s everything one can ask from a rookie.

Fun To Watch – Still Lighting Your $ On Fire

If Nothing Else – Interesting