We seldom stop to appreciate the varied histories of American theatre, believing it to be one history, writing primarily by white men for white America.  African American theatre, though rich in history, tradition, mythology, music, song and dance, was originally reduced to the traveling minstrel shows of the 19th century, written by white male minstrels (Traveling musicians,) and based strongly on racial stereotypes.

After the American Civil War blacks began to perform in minstrel shows (then called “Ethiopian minstrelsy”), and by the turn of the 20th century most of the producing writing, and acting was being done entirely by black Americans.

The first real success of a black dramatist was Angelina Weld Grimke’s, ‘Rachel.’   Grimke was the daughter of prominent bi-racial family of abolitionists and civil-rights activists.  ‘Rachel,’ was produced in 1916 and published in 1920 and is about a young woman who is so horrified by racism that she vows never to bring children into the world. (a radical notion at the time.)

Black theatre seriously began to take root during the Harlem Renaissance, (1920’s and 30’s) when African American culture, particularly in the creative arts, flourished and is remembered as one of the most influential movements in African American literary history.  Literature, music, theatre and visual arts, began to reshape and present black Americans from their own experiences and perspectives outside of the white stereotypes that had influenced black peoples’ relationship to their heritage and to each other.

Experimental groups and black theatre companies emerged in Chicago, New York City and Washington, D.C.  It was during this time that the Ethiopian Art Theatre, established Paul Robeson, as America’s foremost black actor. Robeson, was the son of a former slave. He obtained a law degree at Columbia University, but due to lack of opportunity for blacks in the field of law, he moved into an acting career with great success. 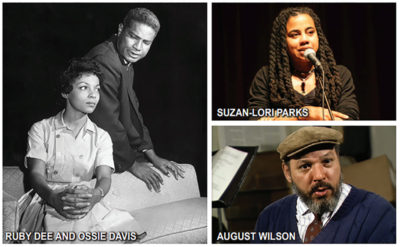 Garland Anderson’s play ‘Appearances’ (1925) was the first play of black authorship to be produced on Broadway, but black theatre did not create a Broadway hit until Langston Hughes’s, Mulatt,o won great success in 1935. Hughes was one of the most important writers during the first half of the twentieth century.  His work gave voice to the black experience, something sorely lacking in American literature and culture.

The Federal Theatre Project, was also founded in 1935, providing a training ground for black actors. In the late 1930s, black community theatres began to appear, revealing talents such as those of Ossie Davis and Ruby Dee.   By 1940 black theatre was becoming more established and organized in America.

After WWII black theatre artists grew more progressive in their efforts to establish an identity outside of the predominant white theatre culture.  Councils were organized to abolish the use of racial stereotypes in theatre and to integrate black playwrights into the mainstream of American theatre.

In 1950, actress Juanita Hall, became the first African American to win a Tony Award, (Best Supporting Actress,) for her role as Bloody Mary, in the stage version of Rodger’s and Hammerstein’s, South Pacific.

Lorraine Hansberry’s drama, ‘A Raisin in the Sun,’ staged in 1959, was the first show written by a black woman, to ever be produced on Broadway.  Hansberry used her own resources to help raise money for the production.

The title was taken from Langston Hughes poem, ‘Harlem,’

What happens to a dream deferred?
Does it dry up
like a raisin in the sun?

At the age of 29, Hansberry won the New York Drama Critics’ Circle Award, making her the first African American dramatist, the fifth woman, and the youngest playwright to do so. Hansberry died at the young age of 34 from cancer.

Hansberry’s, ‘A Raison in the Sun,’ and other successful black plays of the 1950s and 60’s, portrayed the difficulty of blacks maintaining an identity in a society that degraded them.

Theatre has always been a reflection of cultural attitudes and a mirror to reflect the best and worst in society.  The 1960s saw the emergence of a new black theatre, more defiant than its predecessors with a goal of breaking racial barriers and stereotypes. Playwright Amiri Baraka (birth name LeRoi Jones) was one of the strongest proponents of depicted whites’ exploitation of blacks. He established the Black Arts Repertory Theatre in Harlem in 1965 and inspired other playwrights to create a strong “black aesthetic” in American theatre.

Black theatre has grown immeasurably. Theatre artists have founded their own theatres and companies, written and performed in Pulitzer Prize winning productions.  They have created dramas, comedies, musicals and every conceivable form of creative expression and the contributions of African Americans in the performing arts is vital to the growth, history and evolution of American theatre.