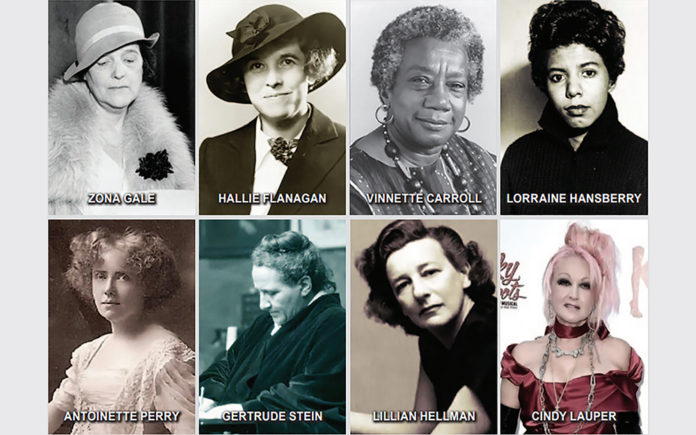 In penning those words, Zona Gale laid out her vision of feminist philosophy and earned the 1921 Pulitzer Prize: the first Pulitzer Prize for drama earned by a woman.

The history of women in theatre is a distinct legacy that is to be celebrated and heralded as an evolution that continues on the modern stage.

The birth of theatre is credited to the ancient Greek culture. The first plays were performed in the Theatre of Dionysus, built in the shadow of the Acropolis in Athens at the beginning of the 5th century, but the art of theatre was thought to be too dangerous for women and so they were prohibited from participation.

Hrosvitha, was a nun in the 10th century who wrote comedy and is often credited as the first female playwright. She was able to break out of the church restrictions against women and actually earn a living as a playwright.

When Opera came along during the 16th century, theatre began to open up for women. Some productions even called for women in starring roles.  Yet despite this new advancement, female Opera singers were still facing many obstacles. Just as with Ancient Greek societies, (and some contemporary cultures,) Christian rule sought to control women’s behavior and so it was commonly deemed inappropriate and unchaste for women to perform on stage. Women’s Soprano parts were often replaced by a type of male performer known as the Castrati, (a male whose singing voice is achieved by physically castrating him before he reach puberty.) The purpose of the Castrati was to try and achieve the quality of a woman’s pitch without allowing females to actually perform in Opera productions.

In the United States, it wasn’t until the late 19th and early 20th centuries that a breakthrough period for women began in performing arts. Female performers began to enjoy a relatively prominent place under the dazzling Broadway lights and theatre audiences began to include more women.

During the Great Depression of the 1930’s, the Federal Theatre Project was born. Director Hallie Flanagan, led the project that funded regional theatres and created 15,000 jobs.

In 1947, the Tony Awards were named after Antoinette “Tony” Perry, co-founder of the American Theatre Wing.  That same year, Margot Jones, opened the first professional regional theatre, Theatre ‘47, in Dallas, TX. Lillian Hellman became one of the most successful female playwrights in American history beginning with production of her play Little Foxes, which opened on Broadway in 1939. She had a career that spanned multiple decades.  In 1959, at the age of 29, Lorraine Hansberry, became the first Black woman, (and noted lesbian) to have a play produced on Broadway.  Her play, A Raisin in the Sun, has become a classic in American theatre.

Although American women have found a more inclusive place onstage, they still struggle to escape ingrained and oppressive systems of gender discrimination.  Women are still disproportionately under represented in the theater. According to Works By Women, “It is estimated that women playwrights, directors, and designers represent only 20% of all theatre professionals hired each year”

Maya Angelou, said, “Our stories come from our lives and from the playwright’s pen, the mind of the actor, the roles we create, the artistry of life itself and the quest for peace.”

Women in theatre continue to be an intricate part of the tapestry that weaves the artistry of American life.