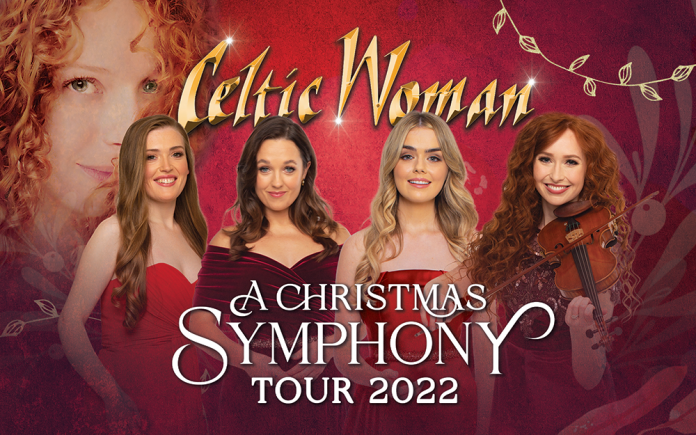 Celtic Woman, an all-female Irish musical ensemble, brings their A Christmas Symphony tour to the United States from December 2 through December 22, kicking it off at Fantasy Springs Resort and Casino in Indio. We had a chance to chat with Muirgen O’Mahony, one of the four members, ahead of their show here in the Coachella Valley.

For as long as she can remember, Muirgen has known she wanted to be a singer. She loved singing and performing, but never imagined she would end up doing it for a living. A big turning point for her was when she took the plunge and moved to London to train at the Royal Academy of Music. At only 22, that was a big move for her and gave her the sense of determination she needed to follow her dream.

Muirgen vividly remembers her first live performance singing in public for the first time at a school mass. “Gosh, I must have been 8 years old. It’s quite funny to look back on now – I used to think the altar was my stage! While I was definitely terrified when I started to sing, I just remember it feeling like the most natural thing in the world. I loved it,” she recalls.

Since joining Celtic Woman in 2021, Muirgen explains that the experience has been the most incredible journey so far, especially since she first saw them perform when she was a teenager. “I feel so blessed to be a part of this group. First and foremost, the girls I get to perform alongside are some of my best friends. They are the best people and so talented. There aren’t many people who get to tour the world and perform with their friends, I’m so lucky!” She’s particularly happy about finally getting to tour and perform with the group and her favorite part – meeting the incredible fans. She says, “They are so dedicated and have welcomed me with open arms, I’m so grateful. I can’t believe I’m part of that iconic group I first saw on TV with their PBS special nearly 20 years ago now!”

Muirgen loves playing with an orchestra and describes it as “one of the most incredible experiences I’ve ever had in my life. The energy you feel both as a performer and as an audience member from this amazing body of sound is just electric. I think it’s made all the more special when you get to perform special arrangements of Christmas songs like the ones we have in the show. It’s magical!” She explains that the show is a perfect amalgamation of classical and traditional elements, mirroring the exact music you might hear through the streets of Ireland at Christmas time. Each of the pieces of music has an Irish flair, often with the addition of the brilliant bag pipes or Irish whistle, and acts as a window into the Irish festivities. The beautiful, sparkly arrangements are very reminiscent of the twinkly lights you might spot along Patrick’s Street (the main street) in Cork.

When fans come to Fantasy Springs, they can expect their hearts to be lifted by the beautiful lineup of classic Christmas songs with an Irish twist, along with some traditional Irish songs, (some never before performed by Celtic Woman). The singers hope to transport fans to Ireland during those two hours and show them what Christmas is like on the Emerald Isle. For more info and to purchase tickets, go to https://www.fantasyspringsresort.com/entertainment/