When the Rock And Roll Hall Of Fame was conceived in the early ‘80s, it was an idea that seemed long overdue. Spearheaded by Atlantic Records President Ahmet Ertegun, Rolling Stone publisher Jann Wenner and assorted music industry insiders, it paid homage to the people who created a genre of music that was originally considered to be a passing fad.

The inaugural ceremony was held 30 years ago in 1986. Inductees included the architects of Rock & Roll: Chuck Berry, Fats Domino and Little Richard, their original disciples: Elvis Presley, Buddy Holly, Jerry Lee Lewis and the Everly Brothers. As well as a trio of Soulful progenitors: James Brown, Ray Charles and Sam Cooke. Since then, the criteria has been simple; an artist is eligible 25 years after releasing their debut recording.

Things went smoothly for several years, as plenty of ‘50s and ‘60s icons were easily inducted. But since the turn of the 21st century, the nomination process seems to have been tilted toward the influence of publishing titan Jann Wenner. Artists who have been eligible for years, decades, like the Monkees, Yes, Harry Nilsson, Motorhead, X, the Blasters, Los Lobos and Warren Zevon have been bypassed or rebuffed.

Finally, in 2012, the Hall Of Fame opened the nominee voting to fans around the world. The top five nominees as voted by the fans count as one ballot entry. That is how popular bands like Kiss and Rush got inducted. This year inductees included over-looked artists like Cheap Trick, Chicago, Deep Purple and Steve Miller. N.W.A. also made it in, having qualified in 2013.

A going concern for over 40 years, and eligible since 2001, Cheap Trick was finally inducted last week. The band’s origins can be traced to Fuse, a Rockford, Illinois band Rick Nielsen formed in the late ‘60s.

Born in 1948, Rick Nielsen grew up surrounded by music. Both his parents had been opera singers, in later years his father owned a music store. Preternaturally gifted, before he hit puberty, he had already mastered drums, keyboards and guitar. In high school he cycled through a series of bands. His longest lasting combo, the Phaetons morphed into the Grim Reapers, which featured future Cheap Trick bassist, Tom Petersson.

By the early ‘70s, the pair collaborated again in a Philadelphia band called Sick Man Of Europe. Drummer Bun E. Carlos (ne’ Brad M. Carlson), was added to line-up, right as the band collapsed in on itself. The trio reconvened in Rockford with singer Randy “Xeno” Hogan, but he was quickly replaced by protean tenor Robin Zander.

Between 1974 and 1977, the four-piece played probably 200 shows. Starting in local bars and clubs, and opening for whatever headliner came through town, Kiss, Boston, Santana, Journey and the Kinks. Along the way, they created a kinetic live set, adopting quirky stage personas that weren’t as wildly theatrical as Kiss, but just as effective.

Robin Zander and Tom Petersson were the pretty/handsome front men. Bun E. Carlos looked like a bored accountant moonlighting as a drummer in a strip club. Rick Nielsen modeled his look, (from the flipped bill of his baseball hat, to his loony facial expressions), to mirror the bratty rebellion of Bowery Boy Huntz Hall.

Honing their chops for three years meant the band had amassed a catalog of at least 200 songs. They signed with Epic Records in 1976.

Their self-titled debut arrived the following year. A sharp synthesis of Beatlesque Power Pop and Who-tastic Power Chords, it was met with indifference.  But America was in the midst of post-Bicentennial malaise and careening toward a Disco Apocalypse. Maybe they weren’t ready for something really cool.

Seven months later, their shiny sophomore effort, In Color arrived, and in the Spring of 1978, their third (and most assured) album, Heaven Tonight was released. Even though America wasn’t buying, Japan was paying attention. All three of their albums went gold there. On their first Japanese tour, there was pandemonium; it was their own version of Beatlemania.  Capitalizing on their popularity, the band recorded two live shows at the indoor Budokan arena in front of 12,000 screaming fans.

Cheap Trick At Budokan was meant as a thank you for their passionate Japanese fans, as such, it was only released in that country in October, 1978. But a funny thing happened, suddenly, America woke up and began paying attention.

Import copies of ...Budokan were flying off the shelves. Radio embraced the live version of “I Want You To Want Me,” as well as the weirdly subversive “Surrender.” Seizing the opportunity, Epic released the album domestically in February, 1979 and it shot to the top of the charts, hitting #4 on Billboard’s Top 200 and ultimately selling three million copies.

Cheap Trick rode out the remainder of the Me Decade as unlikely superstars. Their fourth studio album, Dream Police was released in September, 1979. It peaked at #6 and was certified platinum a few months later.

The ‘80s were less kind to the band.  Sick of the constant touring and recording, and hoping to make a mark as a solo artist, Tom Petersson left the band right after they recorded All Shook Up. Despite the fact that their fifth effort was produced by the “fifth Beatle,” George Martin, it felt overcooked.

The band floundered through the first half of the decade. Petersson was replaced, first by Pete Comita and then John Brant. Over the next few years, they released a series of lackluster albums that tried the patience of loyal fans.

One On One, Next Position Please, Standing On The Edge and The Doctor seemed consigned to the cut-out bins five minutes after they appeared. Tom Petersson re-joined in 1988, and they recorded their best-selling album of the ‘80s, Lap Of Luxury.

Ironically, they were propelled back on the charts by “The Flame,” an unctuous and flatulent power ballad they didn’t even write. (Epic insisted the band rely on hired guns.  Four of the album’s ten tracks came from outside writers.)

As the 20th century came to a close, it seemed as though the record industry had abandoned Cheap Trick. Luckily, their fans hadn’t. Kids that memorized every note of At Budokan were now leading lights of the Grunge era. Nirvana, Smashing Pumpkins and Pearl Jam all sang the praises of the band.

Even the Beastie Boys’ opened their Check Your Head album by quoting Robin Zander’s halting, spoken Budokan intro to “Surrender;”  “this is the first song on our new album.”  Suddenly they were touring with Guided By Voices, and playing concerts with Pearl Jam and Smashing Pumpkins.

Although it was poorly distributed, their self-titled 1997 release was their best received album since 1979. They began the new millennium covering Big Star’s “In The Street” which was used as the theme song for the TV series, “That ‘70s Show.”

For the last 16 years the band has toured consistently and sporadically released albums, “Rockford” in 2006 and “The Latest” in 2009. They commemorated the 40th anniversary of the Beatles’ epochal Sgt Pepper album by recording their own version.  In 2010, Cheap Trick suffered an acrimonious split with drummer Bun E. Carlos. His position on the kit has since been filled by Rick Nielsen’s son Daxx. 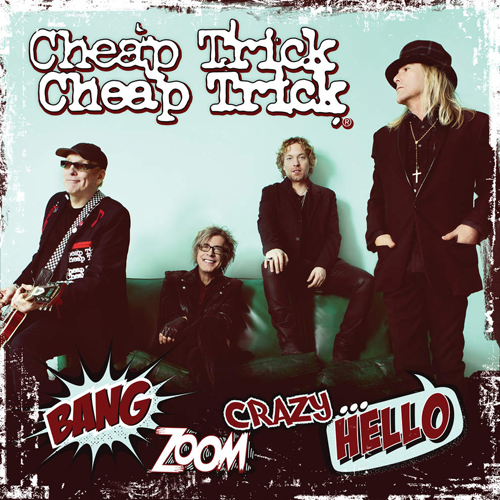 Recently, their paths collided with Scott Borchetta, a life-long fan who just happens to be the founder of Big Machine Records. The Nashville label is home to Taylor Swift, Tim McGraw and Rascal Flats. Now Cheap Trick is aligned with one of the biggest labels in the Country and they have just released their 17th studio album, Bang Zoom Crazy…Hello.

Any worries that Cheap Trick has made a Country record are quickly dispelled by the squally feedback that opens the first track, “Heart On The Line.” Powered by a pile-driving rhythm, thundering bass and Nielsen’s cyclonic riff-age, Zander captures the frisson of instant attraction. “Standing in the middle of a traffic jam, my heart’s playing bumper pool, one thing lead to another then I took a shot/My heart was on the line, I was working overtime with my balls in the pocket will I ever be the same.”

Three tracks display Cheap Trick’s virtuoso versatility. Despite the title, “No Direction Home” isn’t a Dylan-esque Dust Bowl Ballad. In reality, it’s an irresistible slice of souped-up Power Pop. Propelled by a locomotive back-beat, strafing synths and electro-jangle guitar, Zander’s feverish lyrics chart a Homeric odyssey back to a loved one. His urgency is underscored on the vocoder assisted chorus and the scattershot guitar solo.

In a blind Pepsi challenge, one might mistake “Long Time No See Ya” for the work of a feral pack of enfant terribles.  Actually it’s been crafted by a cadre of wily sexagenarians.   A fractious and Punky party anthem, it opens with plinky synths, doubles down with a rock steady beat, blitzkrieg riffs and Zander’s angst-y vocals.

“When I Wake Up Tomorrow” offers a stylistic 180, a thoughtful, mid-tempo track that recalls “Oh Caroline” from the In Color album. Over stabby keys, crashing cymbals and low-key strumming, Zander’s unadorned vocals are center-stage as he insists he’s on his knees, hoping for a happy ending to a tumultuous relationship. Nielsen can’t resist adding a scorching solo on the instrumental break.

The best songs here acknowledge Cheap Trick’s rich musical legacy, but still push the envelope. “Do You Believe” is anchored by a kick drum stop-start rhythm and muscular chord changes that share some musical DNA with Bachman, Turner, Overdrive’s “Let It Ride.” As Zander advises a cuckolded pal, Nilsen cranks the tune up to 11, with his hopscotch pyrotechnics. Meanwhile, guitarist Wayne Kramer, (from Proto-Punk pioneers the MC5) ratchets up the tension with a caterwauling solo.

Other interesting tracks include the sleek “Sing My Blues Away” and the sandblasted grace of “The Sun Never Sets.” The latter provides a nice showcase for Daxx Nielsen’s percussive prowess.

Cheap Trick has always managed to add their own subversive spin to well-loved cuts from artists like Terry Reid, the Move and Fats Domino.  This time they tackle the epitome of ‘60s Cool Jazz, “The In Crowd.” They eschew the finger-popping elegance of Ramsey Lewis’ definitive version, adding stutter power chords, fluttery synths, a walloping back-beat, pulsating bass lines and Zander’s blasé vocals.

The album careens to a close with “All Strung Out.” A wicked, stream of conscious rave-up, the lyrics randomly name-check Frank Serpico, Patsy Cline, the Seeds, Johnny Cash and Courtney Love.

Bang Zoom Crazy…Hello was produced by Julian Raymond, who has been around since the ‘90s and worked with everyone from Everclear, Fastball, Fleetwood Mac and Rosanne Cash. Most recently, was behind the boards for Glen Campbell’s last four albums.

Although Bun E. Carlosis missed, Daxx Nielsen is an excellent addition to the band. The album is consistently great. To paraphrase their classic hit from 1978: “It wasn’t easy it was hard as hell, they didn’t get luck in a wishin’ well/Never worked so hard, had so much pain/Woudn’t change it for anything.” Cheap Trick is truly on top of the world and they can’t get any higher.