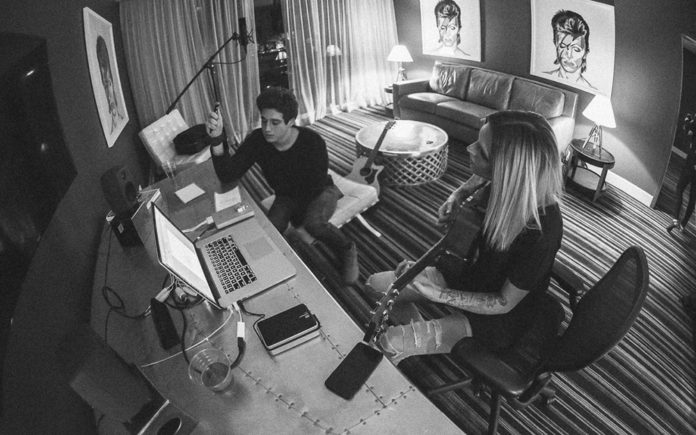 Chester Rushing, the actor who plays Tommy H. in Stranger Things, appeared at the Hard Rock Hotel in Palm Springs on December 22 at 7 p.m. for an all-ages meet and greet and a live musical performance. The actor and musician took photos and mingled with fans before his performance with local musician and producer Esjay Jones. 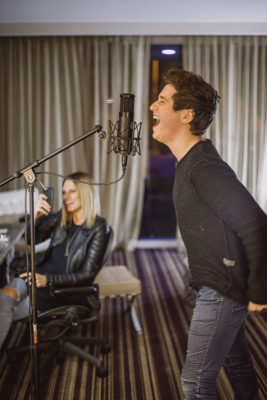 According to Rushing, interacting with fans is a top priority for him. “I do a lot of meet and greets… whenever I have the time, usually in between series or in between movies… I’ll go into Comic Con and try to connect with people around the world because it’s such a great experience to get letters and things from Dubai or Argentina or Paraguay or Vietnam.  It’s just mind blowing,” he says. “So I try to go back out and meet these people as much as I can because I want to find out about their lives and where they’re from and their stories just as much as they want to find that out about me.” Rushing was also excited to return to Palm Springs after attending Comic Con Palm Springs last summer and seeing some familiar faces. “It was fantastic! I had a blast… people had been writing me for a few days saying that they’re coming… that’s always really nice. And I’ve seen some of the people here before because of the Comic Con. It’s nice to see a familiar face, and especially a beautiful place like this,” he says.

Another reason that Rushing returned to Palm Springs is to work on making music. He and Jones are working together to produce an EP next year. “Esjay Jones, she said that she would love to work in the studio with me on a new single, so I said ‘Abso-friggin-lutely!’” he says. “We did preproduction the last three days and finished it up this morning.” The Hard Rock Hotel offered them space to record in and they finished a single in less than four days, which was one of the songs that they performed together.” We’re playing a few songs tonight, some old, some covers and then I’m going to try it. I’m going to say ‘Hey guys, we wrote it this morning, show us a little love!’” Rushing jokes. “Hey, why not, we’re all having fun.”

As Rushing tells it, he’s been waiting for an opportunity to make music. He has experience, with his song “Paint the World” reaching number two worldwide, and previous experience performing with a band. “We were playing Gexa Energy Pavilion with some people like Train, The Fray, 5 Seconds of Summer, Smashing Pumpkins, we got to do that on the side stages. We played at the bottom of like, a pizza joint like a pizza basement and people were there rocking out,” he says. That project broke up due to creative differences and his burgeoning acting career, with him saying, “I Had to move to L.A. and I had to work on my film stuff because those opportunities were coming up and I needed to stay focused… they understood that as well… I knew the direction that they wanted to go wasn’t the direction that I was headed.”

Rushing is still just as passionate about acting as he is about his music career. “I wanted to be an entertainer… I wanted to create and I have this hunger for just learning and making things creatively with people. There’s just a feeling you get when you collaborate with somebody… me and Esjay, we clicked in the studio… those kinds of relationships… the energy is there between you both, you cannot do any wrong. I think that’s also why Stranger Things worked, because we just wanted to make something great and truthful and fun and whatever comes after that… it’s great. It’s been a humbling experience,” he says.

While working on the sets of Stranger Things and Logan, Rushing also got the opportunity to observe on days he wasn’t filming and seems humbled by that experience as well, saying, “In season one [of Stranger Things] we would go all the time on days we weren’t shooting and sit on set and hang out and watch because we loved it. We wanted to see this, it fascinated us. The people in the town that we were shooting in… they dressed up in their 80’s garb and came around, they even put some of them in the show!”

He also has a role in a Hulu series called All Night coming out next year. “It’s kind of a growing up coming of age story about the end of high school. It’s really really funny and I play this guy who’s kind of the king of the nerd group and so I get to connect to that because I’m such a big nerd, I love Star Wars, I love going to Comic Cons, I love cosplay, anime… games!… It was my first comedy series so it was a completely different experience than Stranger Things,” He says.