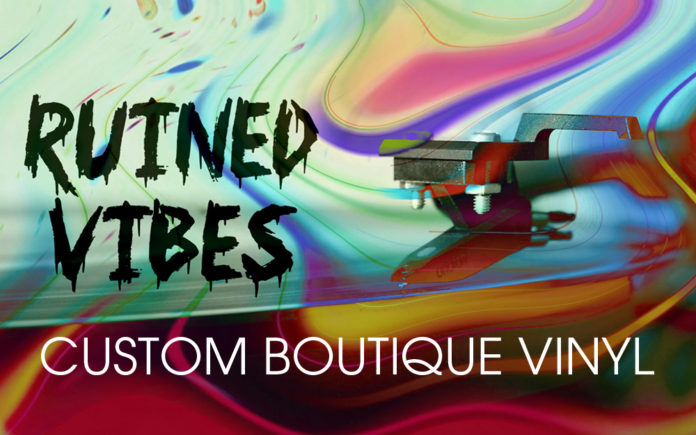 Ruined Vibes is a local boutique vinyl-only record label. It was started in 2015 by Jason Hall, Brent Zius, and Robert Chance. The focus of the label is to release collectible vinyl releases that you don’t even have to have a turntable to enjoy. Of course, a turntable is a must have piece of audio equipment, so it shouldn’t be a problem to actually enjoy the music too. 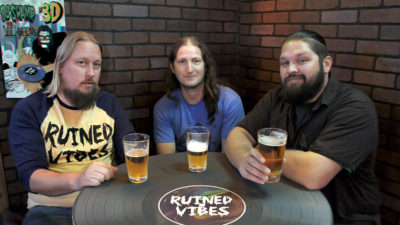 The label started with L.A. based garage/psych band L.A. Witch. Ruined Vibes released L.A. Witch’s first 7” and instantly gained a name for themselves. This release was featured in Thrasher magazine and Spin magazine. L.A. Witch has since gone on to become a mainstay in the rock underground.

DJ Swamp, of Beck fame, was the second release. This release featured many firsts in the vinyl game. For Medicinal Use Only was a full 3D release. The cover and labels were 3D and it came with custom 3D glasses and a 3D comic book drawn by local artist and musician, Joe Lynn, and 3D rendered by amazing graphic designer Robert Chance. It also was the first 7” to feature scratch tools. The 7” scratch tool has become a modern movement with mobile turntablism.

Being heavily seeded in the local scene, Ruined Vibes decided to do a local release and start a sub label, RVjr (Ruined Vibes jr.), to focus on local bands. They’ve released vinyl for local favorites, The Hellions, and long broken up, The Whizards. The Whizards will be doing a one off show to celebrate the long awaited release.

RVjr started a great relationship with local recording studio owner and musician Robbie Waldman. This led to an obvious partnership. Robbie became a full partner in the label just in time for the newest Ruined Vibes release, All Souls. All Souls features local drummer, Tony Tornay, from Fatso Jetson. This release is a return to the full Ruined Vibes releases and features Danny Carey of Tool on one track, and original artwork by Kat Von D, just for the vinyl release.

Jason Hall: “The idea started in about 2008, but I thought it would cost too much to actually put out a record. I finally grew up and realized it didn’t cost all that much in reality; especially to realize my dream. I was living in Austin and my buddy Brent was in Houston. Brent told me about L.A. Witch. I went and saw them while here for Christmas. I knew instantly L.A. Witch should be my first release. I approached them and they agreed. I saw them again in Austin, and it was solidified. Brent came out of a music industry retirement and helped me financially. I knew Chance from back in the day and gave him a call. He was immediately made full partner for his awesome graphic design skills.”

Robert Chance: “I’d been doing album art for my friend’s bands for quite a while. When Jason reached out, I knew it was an opportunity to take this to the next level. He and I have known each other for a long time… so there’s a long history of respect and trust. I mean… this guy used to supply me with booze when I was younger. So he brings me the L.A. Witch artwork and asks me to help with just the layout.”

Hall: “That’s not true! You also did the inside sleeve and the labels and turned it into professional quality work. It was their first physical release. It was written up in Spin Magazine and Thrasher Magazine. What an ego booster right out of the shoot.”

Chance: And from there I was on board and was like, ‘What’s next?’ ”

CVW: How long were you based out of Austin?

Hall: “Yeah. Really, even before L.A. Witch came out, I was already home. The release was done, but the polaroids the band took on the road didn’t get put into the release until I moved back. Also, the seed was planted for DJ Swamp and a bunch of that was done through email, but in reality, the Coachella Valley has been home to Ruined Vibes.”

CVW: DJ Swamp? As in Beck’s DJ and national DMC champion? How did that happen? 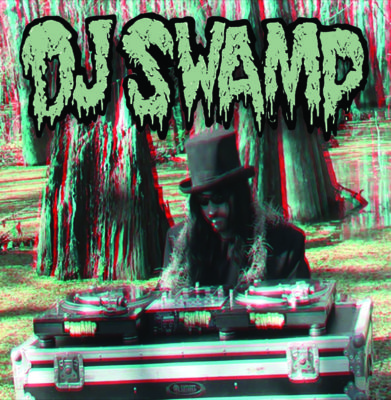 Hall: “I know right?! That was the craziest and most involved release. I reached out to him on Facebook. Within 5 minutes, we were talking on the phone. He had been doing a bunch with old-school anaglyph, red & blue color 3D so I approached him with this idea about doing all 3D artwork, a 3D record, and a 3D comic book. And of course, you’ll need custom 3D glasses to go with all of this.”

Chance: “Jason wrote out the script and action for this epic short story. We got our mutual friend Joe Lynn on board to draw the comic in black and white and R.C. Torres helped storyboard it. Then I came in and did the backgrounds, coloring, and somehow figured out how to convert it all to anaglyph 3D.”

Hall: “I bought everything I could that had 3D. Drawing pads, books, posters, etc. I gave it all to Chance. He figured it out and made it look better than any 3D I’d ever seen. It was like 4 layers of depth.”

Chance: “You know you did good when people were getting headaches from staring at this artwork!”

CVW: Where does Robbie fit in with all of this?

Robbie Waldman: “I’d heard of Jason, but never really met him until a benefit show a bit over a year ago. I bought a copy of the DJ Swamp 7” from him. Last February during Modernism Week, we talked. I felt the new Waxy album would be a good fit for Ruined Vibes. We’d bounced things back and forth from then on. In the meantime, he formed a sub label, Ruined Vibes jr (RVjr).”

Hall: “That’s the smaller label Chance and I started, which doesn’t involve Brent. The “jr” stands for Jason and Robert. It’s a project that focuses more on our local scene.” 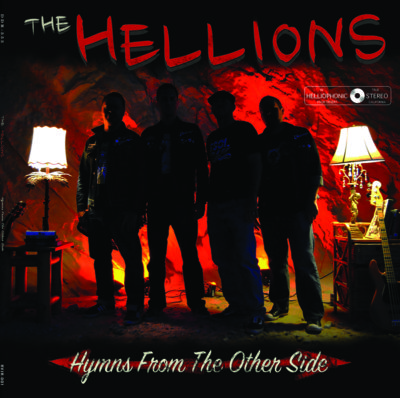 Waldman: “He helped put out The Hellions on vinyl, and put out The Whizards on vinyl. I’m friends with all of those guys. I just loved what he was doing.”

Hall: “Thanks man! I loved what you were doing. I loved that you had a studio and recorded some serious names. That’s what really brought us together. I asked Robbie to be a full partner in Ruined Vibes. I felt it would be mutually beneficial. We could make a one stop shop. Record your record and get it pressed with one group of dudes.”

Waldman: “All Souls is coming out next month. This is the first release I’ve been a part of. We’re extremely happy about this release. It embodies what we are about. It’s a super limited vinyl release in 2 versions. One is a tour only version the band will have available, and the other is a very special limited edition. There are ties to the desert, the band Tool, and we have original artwork for this edition only.”

Hall: “This is Tony Tornay’s (Fatso Jetson) new band. It also is Erik Trammell (Black Elk), and Antonio Aguilar and Meg Castellanos (Totimoshi). Danny Carey plays tablas on a song. And the topper is Kat Von D is doing the cover. Tony and Kat are really good friends. I took a chance and asked if he could get her to do the art. She fucking agreed!!! This will be a bit more expensive than we like, but it is going to be original artwork screen printed by Freddy Jimenez over at Blue Hill Studios in Coachella.” 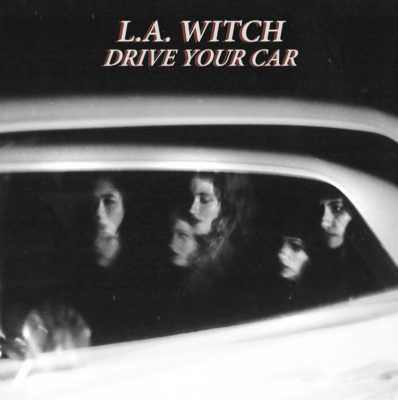 Waldman: “Don’t forget, The Whizards are doing a one-off reunion show for us.”

Chance: “And Waxy’s new album will drop on Ruined Vibes early this year.”

Waldman: “We have a bunch lined up. We’re using all of our connections in the desert scene to try to put something really big together, and we’re meeting with a pretty big band to see if we can take on special edition versions of their albums.”