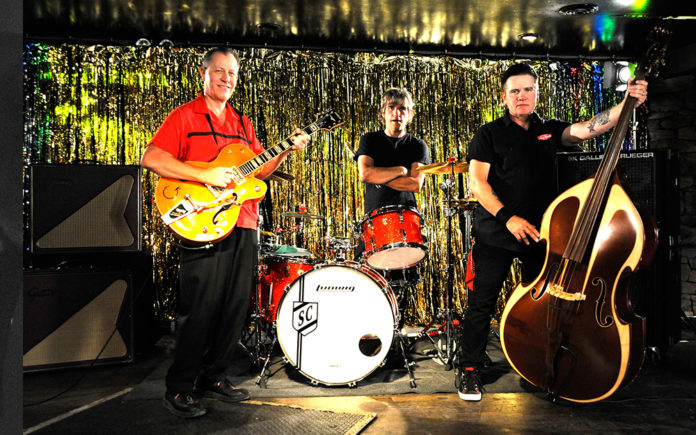 If you haven’t heard of Reverend Horton Heat, you’ve been living under a rock. Reverend Horton Heat is the godfather of modern psychobilly. He and his band got their start in Dallas in 1985 and have been going non-stop since. They have released 11 albums and are currently working on their 12th.

The band is a traditional rockabilly trio featuring Reverend Horton Heat on guitars, Jimbo Wallace on standup bass, and Scott Churilla on drums. Their live shows are not to be missed. They have one of the most high energy concerts and they tour often. On January 11, they will be performing at Pappy and Harriet’s.

Coachella Valley Weekly: How did you get your start in music?

Reverend Horton Heat: “Well, I like blues. When I was young, there was a record store near my house that had a lot of blues. I got exposed to that. I got a guitar and tried learning blues guitar. That led me to my first band. It was a 50’s band. Then I started playing a lot of rock. In high school, I was in a band that got hired for a lot of things, and looking back on it, I was making a lot of money and knew I could make money playing music one way or another, so I just kept doing it.”

CVW: What lead you in the direction of rockabilly/psychobilly?

Reverend: “Like I said, I was a blues kid. I was learning Chuck Berry licks and Elvis licks. I would hang out with a lot of record collectors who had that stuff. They also had a lot of rockabilly. I started getting interested in that stuff and started collecting records and getting people to make cassette tapes of that stuff. Some of those records were already collector’s items back then so you’d have to find someone who had the record and hopefully they’d make a cassette for you. Also, I remember seeing The Cramps. I thought I was going to see a punk rock show, but it was The Cramps. They were playing songs like “The Way I Walk” by Jack Scott. It was old style rock n roll bit high energy. I thought ‘man, this whole blues and rockabilly thing can work in punk rock.’ Another band I saw who did that was The Blasters. They were even more straight on rockabilly. Psychobilly is really a European thing. I never thought of us as psychobilly, but we wrote “Psychobilly Freakout” which got widely accepted.”

CVW: How did you and Jimbo meet?

Reverend: “He was a Houston guy and I drove down there with my band. I had a bass player a few years before I met Jimbo. Jimbo came up on stage after the show and started slapping his bass and doing this double slap thing. I thought he was pretty cool and got his number. It wasn’t long after that my bass player quite, so I called Jimbo and drove down to Houston and got him to join my band.”

CVW:  Standing on Jimbo’s bass is sort of a signature move of yours. Weren’t you worried about crushing it?

Reverend: “Ha Ha. Yeah! We kinda knew it would hold up though… watching all the videos of the old guys standing on them. We knew from watching Bill Hailey. The funny thing about that is that was definitely our signature move and we did it for so long. Then some guy said, ‘you know Jim, that stand on the bass thing, you’ve been doing it for so long. Don’t you think it’s time to stop that?’ I felt like maybe it was getting old. We stopped doing it and almost immediately, everybody is standing on their bass. So we quit doing it for 2 months, and felt like we needed to start again. We didn’t want people to take credit. We thought, ‘oh, they’re just copying us.’ In reality, all we were doing was copying Bill Hailey.”

CVW: In terms of gear, you use Gretsch guitars and amps. To me it sounds like these were made for your sound. Are they vintage or newer?

Reverend: “They’re newish. They started making a Reverend Horton Heat Gretsch in 2004. They sent me 4 of them and they’re really, really nice. Barring one little modification to the bridge, they’re great out of the box. The guy who winds the pickups makes them like Filtertron pickups would be wound. They guy who makes my amps tries to reproduce what an early Fender amp would sound like. The guy who made those Gretsch Executive amps makes Victoria amps and those are really good.”

CVW: Where is your favorite place to tour?

Reverend: “I pretty much like everywhere. I do have to say the West Coast is pretty fun because usually the weather is pretty nice and when you’re cooped up on a bus all day, you get a little weird. Some of the tours in the wintertime, we get cooped up. It’s always nice to get out and walk around. But the fans are great everywhere. It’s a wonderful thing. ”

CVW: You’ve played Pappy’s before. Can you explain the vibe of that place in your own words?

Reverend: “Yeah we’ve played once or twice at least. To me it feels like you’ve got a lot of people into rich music which is great. We have a blast there. There are a lot of people who like the same roots music that I like. The building is pretty cool. The whole place is cool. With Pioneertown it’s like playing outside of the Alamo or something. It’s like playing on the set of The Good, The Bad, and The Ugly.”

CVW: Your last release was in 2014. Any plans on recording a new album in the immediate future?

Reverend: “We’re working on one. We’ve got 9 or 10 tracks already cut. We had our drummer quit in the middle of all that, so it’s been a bit tough. It’s imminent. ”