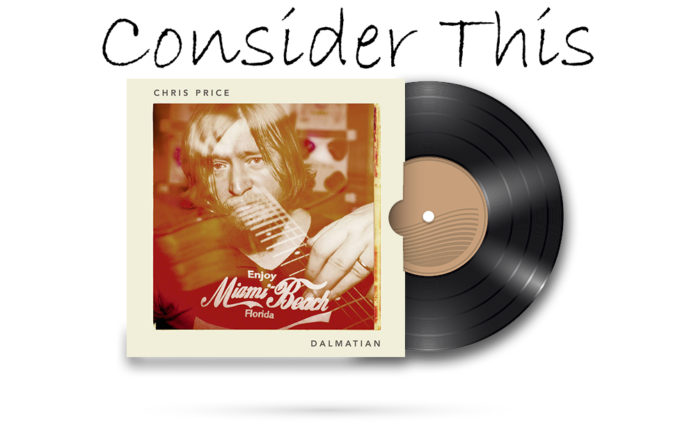 There are certain musicians that you would (metaphorically) follow into battle; Artists that chase their muse, leapfrogging genres, defying expectations, radically redefining their style at the risk of alienating record labels and radio programmers. David Bowie and Prince were like that, Joni Mitchell too, until she sorta retired. Elvis Costello continues to confound conventional wisdom, tackling any musical idiom that strikes his fancy, be it ‘60s Soul, Country, Baroque Pop, Classical, Roots Rock or Jazz. (Seriously, name another musician that has created new music with a string quartet, Burt Bacharach and the Roots).

Chris Price is a musician who is quickly attaining that kind of loyalty from his ever-growing fan base. Not to say that his new record, Dalmatian, wildly recalibrates his style. Just that his music feels so fresh, yet familiar and, yes, magical, that fans are ready to pledge allegiance to this protean talent.

Kristian Price Perez was born in 1984 and came from a musical family in Miami, Florida. His dad was a Grammy winning producer and along with a sister and three younger brothers, he grew up with a recording studio in the house. Early musical influences included his dad, the Jackson 5 and the Beatles. He took up piano as a toddler and mastered guitar as a teen. Self-taught, he figured out chords on the fretboard by placing the guitar flat on his lap. He continues to play any stringed instrument using this unconventional technique.

He fronted his first band, actually a duo, The Drop-Outs, before he hit puberty. He cycled through a series of bands and joined his high school’s award-winning Rock Ensemble where he became life-long pals with kindred spirits like Fernando Perdomo and Roger Houdaille. By now, he began investigating eclectic styles like Bossa Nova, Brazilian Psychedelia and Free Jazz. He also drilled down on antecedents like Emitt Rhodes, Harry Nilsson and Nick Drake.

By 2005, Chris, drummer Alex Ibanez and his brothers Mikey and Corey formed a four-piece simply known as Price. Their sound coalesced around the mid ‘60s music they’d grown up loving. Relentless woodshedding and constant club dates built a loyal following. Labels came calling and they signed with Geffen and relocated to Los Angeles.

Once in L.A. they began recording with acclaimed producer Tony Berg. Although Price generated considerable buzz, (a slot at SXSW, song placement on a couple of high profile soundtracks), Geffen inexplicably shelved their record. Eventually, Chris landed on his feet, connecting with Taylor Locke, former guitarist for Rooney. As part of Taylor Locke & The Roughs he played and toured behind two well-received albums. After that modest success he was ready to embark on a solo career.

As fate would have it, someone stole Chris’ Blackberry. Dorking around with his new iphone, he recorded a song and was astounded by the quality of the recording. Adding a four-track recording app he made an entire album on his hone. That solo debut, “Homesick” was released in 2012. The novel approach to making the record got people’s attention, but the music sold itself. It also opened the door to production gigs for a couple of musical idols, Linda Perhacs and Emitt Rhodes.

Linda was infamous for recording the Folk/Psych masterwork Parallelograms in 1970 and then disappearing from the music industry. Coaxed back into the studio in 2012, she recorded her first sophomore effort, The Sound Of All Things Natural with Chris behind the boards. Emitt had been hailed a teenage wunderkind in the late ‘60s. After making a record with The Merry-Go-Round and recording three sublime solo albums, he walked away from the music industry in the early ‘70s.

He was waaaay under the radar when he was introduced to Chris by a mutual friend. Unable to persuade Emitt to produce his music, he was just as happy when a friendship blossomed. When Emitt completely trusted Chris, he revealed that he’d never stopped creating music. With Chris’ encouragement, they began recording in Emitt’s backyard studio. Assisted by a cadre of well-known L.A. musicians and long-time fans, the album Rainbow Ends arrived In early 2016 to unanimous acclaim.

Even as he was working on other projects, Chris never stopped writing his own music. With a backlog of 30 songs he went back into the studio and self-produced his sophomore effort Stop Talking. Pared down to 14 tracks, the record was a sublime synthesis of his myriad influences. Released in early 2017, it appeared on several year-end critics’ lists.

Chris returned to the producer’s chair for Linda Perhacs’ third album I’m A Harmony and Jeffrey Gaines’ latest release, pithily entitled Alright. Now he’s surprised his fans by releasing Dalmatian, an effort comprised of outtakes from the Stop Talking sessions, along with a couple of new tracks.

The album opens with a bit of studio chatter that’s loose and playful and kind of foreshadows the relaxed atmo of the entire record. Musically, Dalmatian kicks into gear with the surprisingly scabrous “Sick Boy.” Fuzzy electric guitar sidles around jangly 12 string acoustic fills, kaleidoscopic keys and a thumpy beat. The lyrics sketch out a portrait of a real American Psycho, surviving on a combo-platter of sex, guns and death. There’s little room for ambiguity when the chorus announces “He’s just a piece of shit.”

“Fever Dream” and “Roller Coaster” offer yin yang perspectives on the vagaries of romance. On the former, Chris is literally a one-man band playing piano, acoustic guitar and effects. A shimmery symphony in ¾ time, the lyrics parse the exquisite pain of falling in love; “You play a game that you’re sane, but it’s clear what’s become of you now, you let your soul go down the rabbit hole/Part of you wants to escape but you don’t know how, it’s a fever dream it winds you like a top and it doesn’t stop.”

The latter is powered by a stuttery, four-on-the-floor beat and urgent guitars, it shares a little musical DNA with the ELO classic, “Sweet Talkin’ Woman.” Here the mercurial mystery of new love is supplanted by the dull day-to-day of domesticity. Invariably, familiarity breeds contempt and personalities clash; “You’re black and white, I’m shades of gray/It’s raining cats and dogs but it’s a fine, fine day for a roller coaster, living with you.” The sweet slide guitar solo undercuts the enmity.

Three tracks start with a Post Punk/Power Pop paradigm and build from there. The sad-sack sentiment of “I Won’t Be Loved” is blunted by a boinging, Pogo rhythm, gangly guitars and sprightly organ colors. Lyrics like “I won’t be loved…you won’t be mine” end up a self-fulfilling prophecy, for a guy who feels like “Only a guest in my time.”

If Nick Lowe, Abba, the Archies and the Four Tops had a musical love child, it might sound like “Discount Love.” Here, a Soulful, sugar-pie-honeybunch beat pulsates under rubbery bass lines, pounding piano, Sugar-Sugar-y layered vocals, and self-deprecating wit. Newly single, a guy advertises his romantic wares for a low, low closeout prices; “For discount love, you’ll get more than you bargained for, when you promise forever more, I’m practically giving it away…love/I’ve forgotten what love was worth, so you’ll make a killing if You get here first, it’s like I’m just throwing it away, discount love.”

“Breakfast Cruise” is also wickedly funny. Anchored by a walloping backbeat that recalls Elvis Costello’s “No Action,” tensile bass lines and angular guitar, the track also features a soaring string section and honeyed, Beach Boy-esqe harmonies. The lyrics offer a droll account of an epicurean boat trip that hijacks more amorous pursuits; “Scrambled eggs and a croissant, steak with the accoutrements, I know without a doubt they’ll have to cart us out/Peach Mimosas ‘till I’m sick, stomach filling up with bricks, I’ll have to thank the host before I’m comatose.”

Chris wears his ‘60s influences on his sleeve for three tracks. Going completely solo on “The Dream Is Over (But We’re Just Waking Up),” his fidgety piano notes mirror the anxious tone of the Fab Four’s “I Want To Tell You.” His stacked, sunshiny vocals take the sting out of soul-searching lyrics like “Set aside the inner child with open eyes and realize that you and I can never go back to where we were when we were 24.”

“Peculiar Lake Superior” is something of a pocket symphony that echoes “SMiLE” era Beach Boys. Winding Piano runs collide with stylophone and mellotron accents. The lyrics are a bit of a Jabberwocky that uses the Great Lake as a metaphor for feeling overwhelmed; “Peculiar Lake Superior, discovering you’re inferior, the horrible truth just like a great wall/The closer you are to being free, the farther you are from sanity, the fog on the lake it decimates all.”

Finally, “Uncle John” displays the black comedy instincts and trenchant songcraft that recalls the late great Harry Nilsson. Aside from some assistance from his musical soul brother Fernando Perdomo, Chris keeps it spare here, just piano and some effects. Although the titular Uncle John seems suicidal as he perches on a window ledge, as Voiced by Fernando, he insists this isn’t the case; “Don’t patronize Me, I’m enjoying a cool breeze/Go about your day, everything’s ok!”

Possibly the sweetest song here is “I’ll Follow Her Anywhere.” Suffused with sun-dappled acoustic guitars and misty harmonies, it wouldn’t seem out of place on a AM ‘70s Gold radio station, sandwiched between Andrew Gold and Stephen Bishop. Delicate, but never cloying, this sincere encomium pledges undying fealty, insisting “Without you I’m lost and adrift, so let me stay close to you.”

The record closes with “The Angels Of Buena Vista,” a tongue-in-cheek tribute to all who toil in the company town of Burbank. It’s a strictly solo affair, with Chris underscoring his plaintive vocals with piano and marxophone.

Typically, albums that spotlight outtakes offer up interesting ephemera and leftovers that didn’t quite make the cut. Dalmatian is the exception to that rule. Funny and sweet, endlessly inventive, the record stands on its own merits. Chris Price’s music is reliably catchy, clever and soulful, and, the best part is, it feels like he’s just getting started.