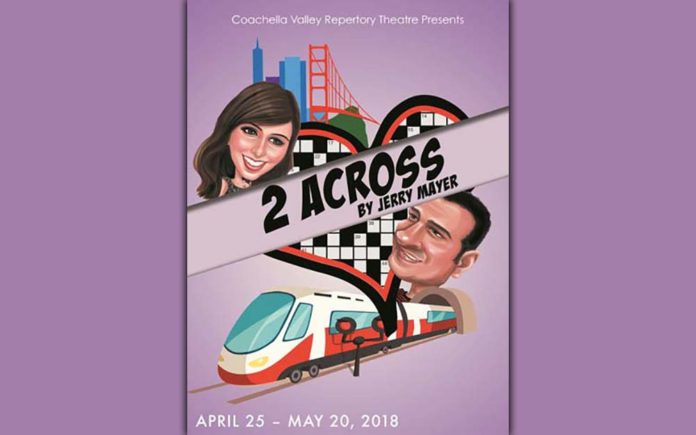 The Coachella Valley Repertory Theatre (CVRep) has announced it will present hit TV Writer/Producer Jerry Mayer’s delightful two-person play, 2 ACROSS.  In keeping with this season’s CVRep theme of ROMANCE, REAL OR IMAGINED, 2 ACROSS is Jerry Mayer’s smash hit comedy of crosswords and romance that asks the burning question, “Can a crossword puzzle change your life?” Jerry Mayer is a playwright with several decades’ worth of television comedy credits. An executive producer for “The Facts of Life,” he wrote for “Bewitched,” “The Bob Newhart Show,” “M*A*S*H,*” “The Mary Tyler Moore Show,” and “All InThe Family.”

Two strangers board a San Francisco BART train at 4:30 a.m. They’re alone in the car, each is married, both are doing the New York Times crossword. She’s an organized, sensible psychologist. He’s a free-spirited, unemployed ad exec. She is a crossword pro, he always quits. When he tosses his puzzle away, she snaps, “Crosswords are a metaphor for life, those who finish, succeed, those who don’t, fail.” This starts an eighty-minute ride described by critics as “Hilarious,” “Witty,” “Romantic,” “Poignant,” and “Wonderfully entertaining.” 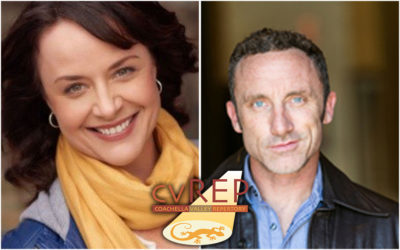 Says Founding Artistic Director Ron Celona, “I wanted to present 2 Across at CVRep  because when I first read this romantic comedy, I thought, ‘What a perfect way to end our season theme of ROMANCE, REAL OR IMAGINED, with a warm-hearted story of how opposites attract and how life gives us opportunities if only we would take advantage of them.’ Take a chance on an unexpected meeting — you never know — it could be the love of your life (or not).”

Directed by veteran Director/Actor Deborah Harmon, who directed the world premiere of 2 Across at the Santa Monica Playhouse, CVRep’s 2 Across runs approximately 90 minutes and will be presented without an intermission. The two-character play will feature Andrea Gwynnel and Joel Bryant, who returns to CVRep after appearing last season in Later Life (in multiple roles).

2 Across will enjoy a four-week run from Wednesday, April 25 through Sunday, May 20, 2018 at Coachella Valley Repertory. The theatre is located in The Atrium, 69-930 Highway 111 in Rancho Mirage. Performances are Tuesday through Saturday at 7:30pm, with 2pm matinees on Saturday and Sunday. Tickets are $48 (Previews), $63 (Opening Night), and $53 for all other performances. For more information, call 760-296-2966 or visit the website at cvrep.org.

THE COACHELLA VALLEY REPERTORY THEATRE is a non-profit, professional regional theatre.  It is the only theatre in the Coachella Valley that has Small Professional Theatre (SPT) status with Actor’s Equity.