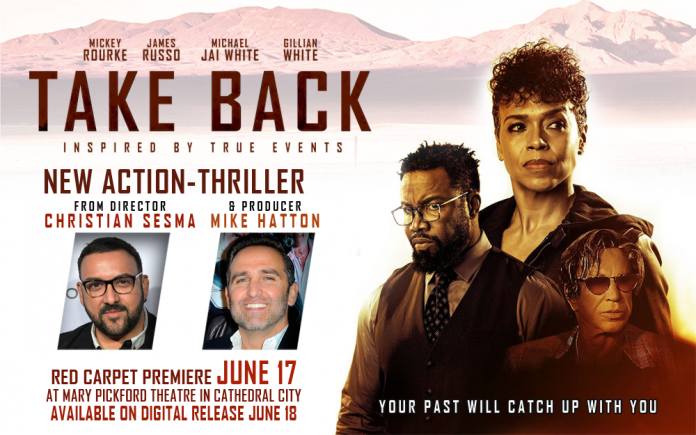 Film has been a consistent source of entertainment that helped many get through the COVID-19 pandemic while being cooped up inside. Even in the midst of coronavirus, new films were being made, one of which being Take Back, directed by Christian Sesma and produced by Mike Hatton, right here in the Coachella Valley. The film has an all-star cast and is a an action revenge thriller released with Mike Hatton’s production shingle, Ton of Hats, Inc. in partnership with 101 Films International.

In Take Back, the plot follows Zara (Gillian White) and Brian (Michael Jai White) who are living a seemingly perfect life when a mysterious man (Mickey Rourke) from Zara’s past kidnaps their teenage daughter. With the help of a small-town sheriff (Russo), the couple races to save their daughter before she’s sold and vanishes into the sex trade.

While Sesma and Hatton have shot films around the world, the Coachella Valley has been featured in several of his movies. Take Back was shot all in the Coachella Valley, with Coachella and Thermal being principal locations of the film. Take Back holds the prestigious distinction of being the first film that was greenlit during the COVID-19 pandemic.

“We shot the movie during the height of the pandemic last summer. It was just us and another Michael Bay movie that was allowed to shoot, so we were among the first in the country to be shooting a film during COVID, dealing with the new safety protocols and transitions that film crews needed to adhere to,” stated Hatton.

Strict COVOD-19 guidelines were set forth by city, county, and state regulations, the industry’s white sheet, The Safe Way Forward, as guidance, SAG-AFTRA’s requirements, and the production’s own mandatory “COVID Playbook,” created by Hatton and Sesma.

The cast and crew, a total of 40 people including 10 cast, took all the precautions, including frequent testing throughout pre-production and production, mandatory wearing of masks, quarantine of remote crew in the same hotel and at home for locals, having professional makeup artists apply the cast’s own makeup each day, and having cast members laundering their own wardrobe.

Sesma and Hatton didn’t stop there, as they also shot another film a few months later in November with Richard Dreyfuss called Every Last One of Them, scheduled to be released early fall. 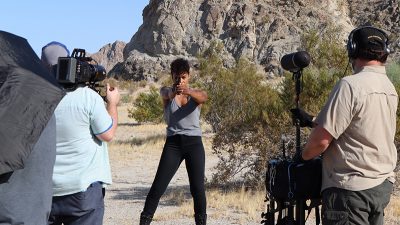 “It was crazy shooting two films during the pandemic. We didn’t know much about COVID at the time. We shot in July, but we were in pre-production in June, so 101 Films really took a risk on myself and my producing partner, Mike Hatton. He was integral to putting this film together and getting us off the ground. It was a brutal shoot wearing gloves and protective equipment in 120-degree weather, but we pulled it off with the help of the community,” said Sesma.

“I remember filming at Lake Cahuilla in the triple-degree heat and no one was complaining. Everyone was just grateful to be at work. We were glad to be doing what we love during the pandemic after months of being quarantined,” added Hatton.

The Take Back shoot lasted for three weeks. The content of the film’s theme and inclusion of underrepresented minorities falls in line with the films that Sesma always wanted to make.

“As a Latino director, I’m always trying to push representation and Gillian and Michael really made this film their own. It was really great to have the opportunity to make that kind of movie. This has a really kick-ass female lead, and you can’t have a more female-empowered film,” expressed Sesma. 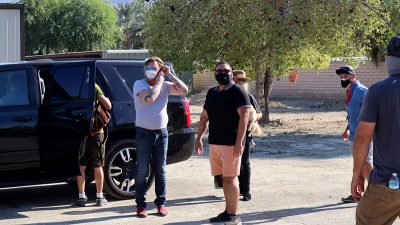 Sesma is looking forward to sharing the familiar desertscapes of the Coachella Valley in the midst of an action thriller with his audiences, highlighting the East Valley in a new way.

There will be an invite-only red carpet premiere on June 17 at the Mary Pickford Theater. There will also be an after-party hosted by Agua Caliente Cathedral City Casino, which will be open to the public to come celebrate and support the film that the crew shot for them, and with them.

“I always think that overcoming challenges and successfully executing a movie with your team who you worked with over and over again is really a dream job. Hatton and I make movies with some of our best friends, an amazing core group of crew and cast members, in my hometown and that’s a huge blessing,” stated Sesma.