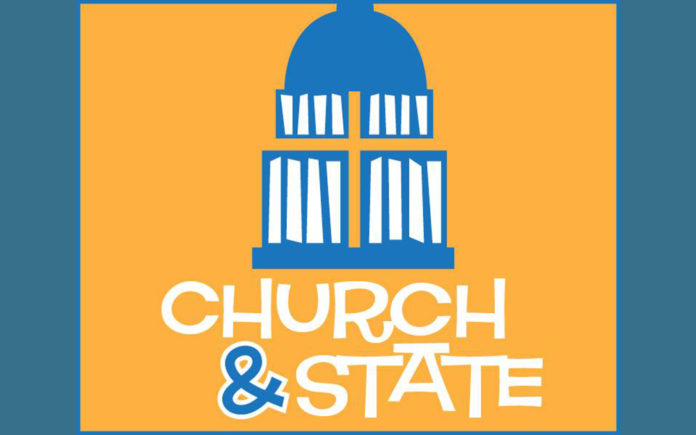 Few things divide Americans more than Guns, God and Politics.  In the first 311 days of 2018, there have been 307 mass shootings.  Many believe in the broad scope of the Second Amendment as devoutly as they believe in the bible and clearly espouse that more guns is the solution.  Others believe that the original intent of the founders ‘well armed militia’ has been badly distorted.  Few would disagree that gun violence is a National problem, yet the solution on how to resolve it is as divided as our politics.

Theatre has always been a reflection of communities and cultures.  The stage is an arena where all aspects of any topic can and should be explored.  Hats off to Dezart Performs and Artistic Director, Michael Shaw, for their production of Jason Odell Williams, “Church & State.” 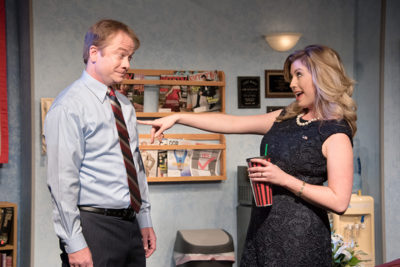 Billed as a ‘serious comedy,’ with the laughs and tears to confirm the description, this story explores Republican North Carolina Senator Charles Whitmore’s, crisis of faith after a school shooting in his hometown community.  It’s 3 days before the election and he is about to do a complete one eighty on his political platform.  Beau Marie portrays Whitmore with such authenticity and genuine likeability that he could walk off of the stage and run for office.  Kelly Moody is absolutely wonderful as Whitmore’s wife Sara, a southern belle with the iron will of Scarlett O’Hara.  Sara is resolute in her belief in Guns and God and does her best to steer her husband back on to the right path when he begins to doubt his faith.  The chemistry between these two is as real as it gets and I thoroughly enjoyed their interactions and revelations, as they both struggle to come out the other side of this crisis.

And where would two southern Republicans be without a New York, Jewish Democrat in the mix?  Tammy Hubler portrays Alex Klein, Whitmore’s Campaign Manager who is on the verge of having a meltdown when she see’s her candidate about to blow the election, along with her chances of getting him into The White House.  Hubler is funny as hell and truly a gem in her portrayal of Alex, who is not about to allow Whitmore’s backsliding to detour them from their political goals.  James Owens rounds out this talented cast as Tom/Marshall/Security guy. 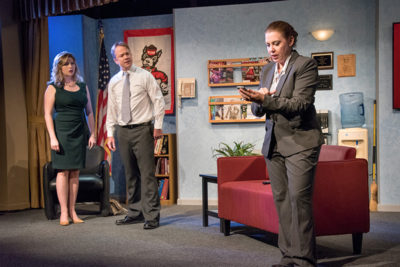 Williams’ script is not afraid to tackle the tough subjects of God and Gun Control and the real life impact on both Democrat and Republican communities, and he does it with humor, poignancy and heart.  A Republican politician taking on the topic of gun violence and control is the most brilliant way to give insights to this divisive issue. Williams wrote,  ‘While most writers hope that their work will live forever, my dream for this play is that it will become obsolete. And many years from now people will read it and think, ‘How quaint! Americans used to argue about gun control.’”

Michael Shaw’s direction is as smooth as Tennessee whiskey.  I was captivated through every minute of this play.  I really enjoyed the nonlinear elements highlighted through Phil Murphy’s lighting design.

Church & State,  is recommended for family members of all ages.  It’s a brilliant portrayal of a critically important topic.  Church & State can be seen through November 18th, at Dezart Performs, located at the Palm Springs Women’s Club, 314 S Cahuilla Rd, Palm Springs, CA

Dee Jae Cox is a playwright, director and producer.  She is the Cofounder and Artistic Director for The Los Angeles Women’s Theatre Project