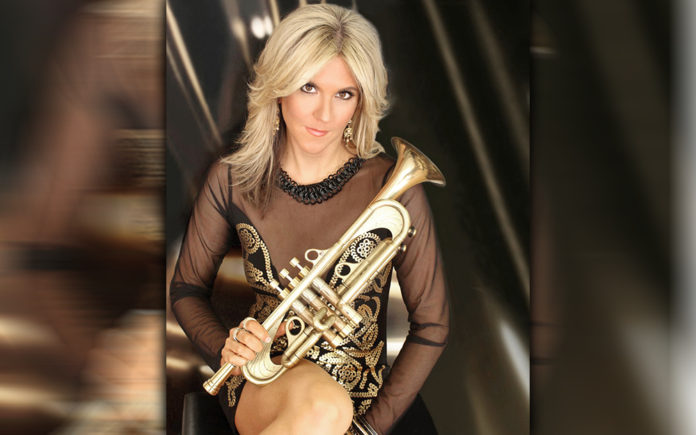 Cindy Bradley is the leading female jazz trumpeter, flugelhorn player and composer in the jazz industry. She already has seven #1 hits under her belt. This talented and dedicated artist is also a school music teacher and flies out on the weekends to festivals and performances around the country.

She has an impressive number of awards under her belt including:

2011 Jazziz magazine’s Critics’ Choice of the Year for Unscripted

Bradley was born in North Tonawanda in upstate New York. She started out playing the piano at 5 years old,  but didn’t have a passion for it. She told me that a persistent music teacher who chased her around for 4th grade band was the one that helped her pick the trumpet and got her into music. Cindy was recently inducted into ‘The Hall of Fame’ for her high school and in a poignant moment her band teacher Mrs. Josephine Sinaguglia, gave her the award. She explained that this teacher changed her whole life. She joked that now she is the one chasing students around to get them into music.

She credits her father with helping her make the leap to jazz. He played jazz organ and he took her to see the Community Jazz Band. She loved it! It was big band style jazz and she became a member with her father’s help.

She went to Ithaca College and studied jazz and music education. She also attended the N.E. Conservatory in Boston. She has a Masters in jazz performance. She moved to New York to become a jazz musician, attending jazz jams and performing on the weekends while teaching music in Long Island.

Her first CD was Just a Little Bit, which she produced on her own label in 2007. She took her CD and made the rounds trying to get on a label. She had success when Les Cutmore of Trippin’ N Rhythm signed her in 2009. She recorded her second CD, Bloom, with Grammy Award-winning producer Michael Broening in Phoenix. She received critical acclaim immediately.

They followed with Unscripted in 2011. Her hit single “Massive Transit” was co-written by Bradley and Broening. It was No. 1 on the US Billboard Smooth Jazz Songs chart for 6 weeks. Her latest hit “Everyone But You” reached #1 on Billboard’s Smooth Jazz Singles.

Her single, “Girl Talk” with Paula Atherton also reached #2 on the Billboard charts. She followed up with “Bliss” in 2014 and then in 2017 with “Natural.”

What I love about her style is it is a mixture of a lot of different types of jazz. While she falls under the smooth jazz genre you can hear the influence of the big band style. She loves all kinds of jazz including

straight ahead, be-bop, and contemporary jazz, as well as funk, Top 40, R&B and jazz fusion. This brings a rich feel to her sound. I am truly one of her biggest fans.

In addition to her music she is a passionate animal lover and a vegan. She currently has 3 dogs and a parrot, a 17 year old African Grey. They just moved to a new house in the country and are already talking about getting more rescues. One of their dogs was rescued off the streets in Thailand. Her husband Dave was the one that rescued him.

Bradley worked at a farm sanctuary for abused farm animals and has been an active rescuer. I follow her on Facebook and love her stories. She touched my heart when she found a tiny kitten at the New Jersey airport, rescued it and took her home. She found a good home for her.

She also extends her big heart to reach out to inspire future generations. She’s conducted hundreds of jazz workshops at high schools and community colleges all over the country. She knows first hand how a few encouraging words can have on young people. She muses “It’s amazing to realize that a lot of the younger kids I teach have never seen anyone play a live wind instrument before their eyes!”

Cindy Bradley is preserving and promoting jazz to this generation and future generations keeping it alive for all of us who love it so much.

This uber talented young woman has raised the bar for female jazz artists everywhere. When I asked her about her goals she said, “to keep growing and working with great people, writing and working on being a good trumpet player.” It’s wonderful to see such a great artist and a great humanitarian achieve the success she deserves.

Check out more about Cindy Bradley and listen to her latest single “Everyone But You” at cindybradley.com and enjoy!