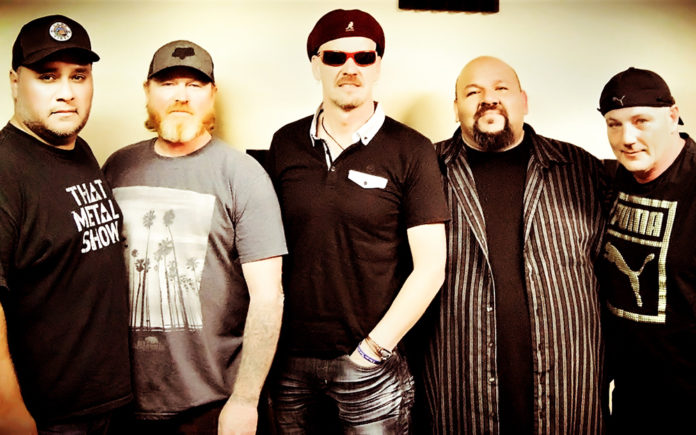 Joe’s Boyz was a concept developed by drummer Joe Beltran. He invited several musicians who weren’t too familiar with each other to his home for a ‘jam session’. They are now in their second full month as a band and have openly discussed writing and recording original material after mastering songs like “Burn” and “Highway Star” by Deep Purple and “Lights Out” by UFO.

The name Joe’s Boyz was the tongue-in-cheek response from the owner and operator of The Sound Hub Rehearsal Studio, Frank Michel, after they contemplated a band name. After a not-so-intense debate, the name stuck. I introduce to you Joe’s Boyz.

Arek Religa is a Coachella Valley-based Polish-born guitar virtuoso. He has too many awards and nominations to list here. When I ‘Googled’ him he was included in 35,500 results. He is an eminent musician, composer, arranger and producer who thrives in his home studio. He picked up the guitar at a young age and began playing for the acclaimed Polish band, Guliver. He landed on the Chicago music scene in 2000 releasing his debut album, In Memory of the Greatest, in 2007. His improvisational guitar work is legendary. He then released the instrumental rock album, Warrior, in 2013 to rave reviews. Arek was the Second Runner-up in Guitar Player Magazine’s Guitar Superstar 2011and was the Gold Winner of the Prestige Music Award in the ‘Electric Guitar’ Category 2013. He won ‘Best New Age Artist’ at the Hollywood Music Awards for the song “Island of My Dreams-Part 1” and in 2007 he participated in the Texas Music Project (Guitar Solo Contest) and was named the winner in the ‘Electric Guitar’ category.

Jerry was a member of and toured with power metal band Raising Cain. He remains a member of High Desert rockers Blackwater. He formerly played for Boneyard, a classic 80’s tribute band. He is a 2016 and 2017 Coachella Valley Music Awards Nominee for ‘Best Bass’. I recall seeing Jerry play live for the first time in 2015, he stole the show. Jerry is an absolute beast on the bass. He works the stage and commands your attention. Jerry was signed by Celestial Records in the 90’s and remains a long-time Sony recording artist working as a session musician. Jerry proudly uses and is endorsed by GHS Strings, Dunlop, RAPCOHORIZON Cables and Warwick Basses.

Joe is a Coachella Valley native who’s been drumming for over 30 years. He started out playing percussion and drums in middle school. During his time at Coachella Valley High School he was the only drummer to win first place in the ‘Super Advanced Solo Drum’ category four years in a row. He is heavily influenced by rock drummers Tommy Aldridge, John Bonham, Tommy Lee, Alex Gonzalez and Mike Portnoy. His versatility allows him to play anything from rock and blues to gospel and Rock en Español. He spent ten years drumming and composing with Draweth Nigh, an original Christian rock band who performed at Cornerstone and Spirit West Coast music festivals. He has also performed with Alternative Christian Rock en Español band Cruz Castillo y La Banda Radical and most recently for the L.A. based Alternative Spanish Rock band Kardo.

Noe has performed and worked with some of the best musicians in the Coachella Valley. He fronted long-time desert favorites Wyte Gye, has performed with the unconventional tribute to KISS, EL KYSS and remains devoted to Aphrodisiac Jacket – A Salute to the Music of The Cult. He is the ‘Susan Lucci’ of the Coachella Valley Music Awards having been nominated for ‘Best Club Promoter’ (2015, 2016 & 2017), ‘Best Event Promoter’ (2017 & 2018) and ‘Best Cover Band’ (2014, 2015, 2016 & 2017) at the Coachella Valley Music Awards but winning none. Noe remains humbled and has also worked with managing artists such as Courtney Chambers, Kelly Derrickson, Mozaiq and AL RO$$I.

Joe’s Boyz performed their first show at Plan B Entertainment & Cocktails in Thousand Palms on 7/26/18 with desert duo Van Vincent. Their next show is Saturday, August 11, 2018 at The Hood Bar & Pizza along with 5th Town and The Afterlashes brought to you by 93.7 KCLB and The Hood.