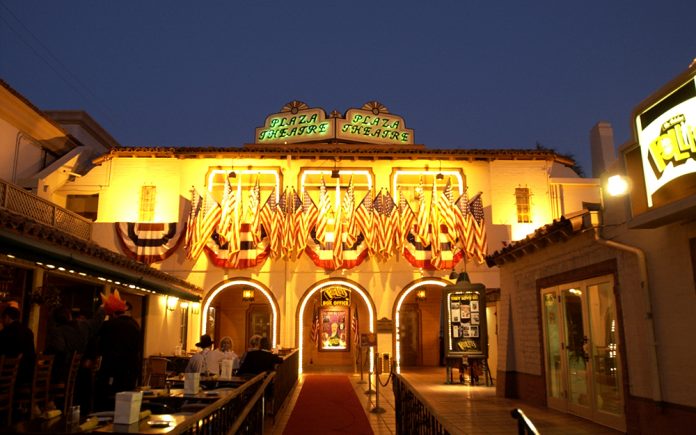 The weekend of March 18, the City of Palm Springs will celebrate one of its most talented and philanthropic residents, Mr. David C. Lee, the acclaimed co-creator of the long-running television series “Frasier” and a passionate supporter of theatre and arts — with two special events highlighting his generosity to the Palm Springs community.

The fun starts on Friday, March 18 with a special Star Dedication for Lee on the world famous Palm Springs Walk of Stars, hosted by the City of Palm Springs and the Chamber of Commerce. The dedication will take place at 3 PM on the sidewalk behind the Downtown Park stage on Museum Way. The Star Dedication is open to the public.

Then on Saturday, March 19 at 1 PM, the City of Palm Springs is delighted to invite local residents to a special reunion at the historic Plaza Theatre dubbed Team Frasier Reunites to Save the Plaza Theatre, featuring Lee, his co-creator Peter Casey, and celebrated actors David Hyde Pierce and Peri Gilpin participating in this special event that will take a fun look back at making of the the well-loved television show and its pilot episode on the stage at the theater. Tickets are $125. Following the event, there will be a VIP “Meet the Creators” catered champagne reception on the stage from 3-4 pm. The reception is a separate ticketed event priced at $50. For more information or to purchase tickets go to SaveThePlazaTheatrePS.com.

The reunion is a fundraiser in support of the theatre’s restoration, which originally opened in 1936 and is currently in need of refurbishment. David C. Lee, recently pledged $5 million for the project. A board of directors of movers and shakers has taken this effort to heart and is reaching out to preservationists, theatre aficionados, and civic-minded individuals and organizations in search of financial support to raise the rest of the $10 million required for the restoration.

Lee will lead the audience through a compelling special insider’s step-by-step retrospective about the making of the pilot of “Frasier”, which ran on NBC for eleven seasons, from 1993 to 2004. The 264 episodes of the series are still aired worldwide today. Following this, cast members David Hyde Pierce (Niles) and Peri Gilpin (Roz) and Co-Creator Peter Casey will join Lee in answering questions from the audience. The event will run approximately 2 hours.

“We are absolutely thrilled that David and the others connected to the show have offered this exciting event,” said Palm Springs Plaza Theatre Foundation president J.R. Roberts. “David’s donation jump started the theatre’s fundraising campaign, and he has now graciously offered this special look back at a show we all loved. We also thank the cast and production crew for also lending their support to this important project.”

“The City of Palm Springs is incredibility thankful to the Palm Springs Plaza Theatre Foundation and David C. Lee for organizing this fun and fantastic look back at the making of Frasier’s pilot episode with creator and producer David C. Lee and cast members,” said Councilmember Geoff Kors, the City’s liaison to the Plaza Theatre Foundation. “I encourage the many Palm Springs fans of Frasier to purchase tickets as soon as you can because this special event is sure to sell out. All proceeds benefit the historic Plaza Theatre restoration and are tax deductible.”

The City of Palm Springs recently launched a campaign to raise capital to fully restore one of its most iconic buildings – the historic Plaza Theatre. Originally built in 1938, it was used for film premieres and screenings, nationally broadcast radio theatre programs, and other performances. In its later years, the theater was home to the long running “The Fabulous Palm Springs Follies.” Over the decades, the building has deteriorated, which has led the City and former Councilmember J.R. Roberts to initiate a capital campaign to restore the beloved structure to its former glory.

In addition to attending this event, there are many ways in which the public may play a significant role in the Plaza Theatre restoration, including becoming a Founder, securing a Naming Opportunity, or making a donation. All contributions are tax-deductible to the extent allowed by law. For more information or to make a donation to support the restoration, contact Foundation Chairman J.R. Roberts at 760-218-6330 or visit SaveThePlazaTheatrePS.com.