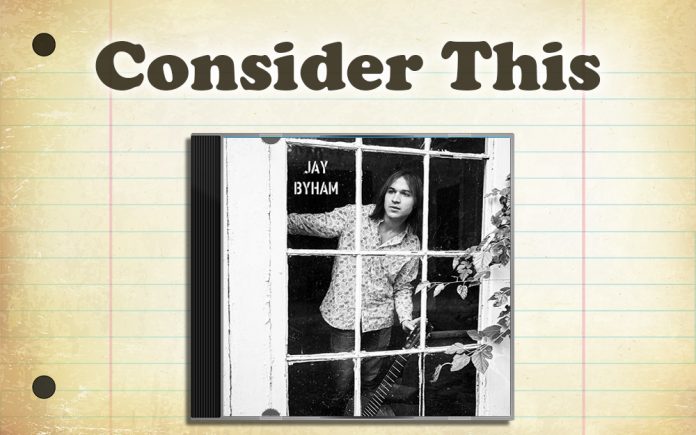 Are you familiar with the cliché “good things come in small packages?” That phrase seems designed to comfort vertically-challenged folks, self-conscious about their size. But in the case of Jay Byham’s self-titled, debut EP, that adage rings true.

The Meadville, Pennsylvania native came from a musical family and began taking piano lessons as a kid. He later picked up guitar and bass. His earliest inspirations were Classical, primarily Bach and Chopin. He was about 10 years old when the Beatles completely blew his mind. By the time puberty hit, he was fronting his own Middle School combo, The Conspiracy Theory.

Jay pursued a music degree in college, majoring in Classical Guitar. Once he finished school, he began performing with his wife Haley as Jay Bird And Haley Bee. The duo made their bones playing everywhere from restaurants to wineries and private events. They released an EP, Take Flight in 2017 and are currently working on a full-length follow up.

A couple of years ago the duo were playing the International Pop Overthrow Festival (the infamous Power Pop Fest that began in Los Angeles in 1998 and has gone worldwide), and connected with Smash Palace frontman, Steve Butler. Soon enough Jay and Steve began collaborating. A couple of songs were recorded just before the pandemic, the remaining three were committed to tape in late 2021.

The EP kicks into gear with “Tick Tock.” Strummy acoustic guitars, whizzing keys and slap-back bass are tethered to a galloping gait. The melody shares some musical DNA with Buddy Holly’s “Crying, Waiting, Hoping.” Jay’s reedy tenor darts through the fizzy arrangement as lyrics bemoan the swift passage of time, noting “change is the only thing that stays the same.” On the second verse, he concedes that hindsight is 20/20; “Looking back, it’s easier to see how quickly the moments turn to memories, it’s hard to believe it’s me in those old photographs, should’ve known the good old days would never last.” A swooping guitar solo is unleashed on the break underscoring both the bitter and the sweet.

On “I Can’t Take It Anymore” searching acoustic chords are supplanted by driving bass lines, stinging electric riff-age and a hi-hat kick. The muscular melody and urgent arrangement belie this stoic post-mortem regarding a broken romance. As jangly guitars ring and chime, Jay attempts to rekindle an extinguished flame; “Remember when we said that our love would never end, the future seemed so bright and then it faded before my eyes, I’m never free, everywhere has a memory, without you there’s only half of me, I can’t stop this pain inside.” Steve rips a cathartic solo on the break that spirals and pinwheels, nearly succeeding in snuffing out the suffering. Honeyed harmonies wrap around the final chorus and the crisp and concise guitar outro closes out with an epic “Day In The Life”-style chord.

The action slows on “The Only One.” Contemplative electric licks lattice atop angular bass lines and a subdued shuffle rhythm before wistful piano is folded into the mix. Jay adopts an appropriately boyish croon as lyrics limn the tentative delight of a blossoming romance; “You’ve brought the brightest color into my life so gray, come wrap your arms around me, make the world go away.” The guitar solo on the break hits that sweet spot that swoons like Badfinger, aches like Bread and breaks just like a little girl.

Conversely, “Just A Matter Of Time” is powered by slashing guitars, wily bass lines and a walloping beat. Well-placed “ahh-ha-ha’s” and “whoo-hoo-hoo’s” amp up the urgency of Jay’s pleas for patience and perseverance. As Tom Petty famously once remarked, “the waiting is the hardest part,” and that remains true for a couple of ambitious strivers looking for a break in this cold, cruel world; “You say you’re leaving, you’re sick of dreaming, you’re burned out and you’ve lost the faith, all this running seems for nothing, nothing ever seems to go our way/Turn the page again and again, it’s all the same, but pretty soon the tide will turn and our luck will change.” On the break, hard-charging guitars pivot between pithy power chords and sugar rush licks. The instrumental coda accelerates with a satisfying crunch. 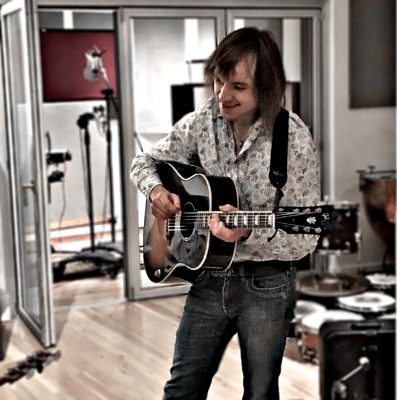 Jay saves the sweetest song for last. “Figure It Out As We Go” weaves a tapestry of slippery acoustic notes, descending bass, flirty keys, shivery electric riffs and a chunky backbeat. His winsome vocals confidently coil around lyrics that quickly banish all doubt; “Can’t stop this life, you take a breath and you’re on for the ride, you just hold on and try and make it through, wrong turns, dead ends, I never know what’s around the bend, at least I know you’ll be there too, as long as you’re by my side, we’ll make it one step at a time.” Stacked harmonies recede and Steve unspools a cascading guitar solo bookended by burnished keys and a tilt-a-whirl beat. A lovely ending to a deft debut.

This is a solo effort in name only. While Jay handled lead vocals and rhythm guitar, he was ably assisted by Steve on lead guitars and keys. Along with David Uossikkinen on drums and Greg Maragos on bass.

Following in the footsteps of protean Power Pop progenitors like Emitt Rhodes (R.I.P.), Todd Rundgren, The Raspberries, Badfinger, Dwight Twilley and Marshall Crenshaw, Jay Byham has distilled his influences, concocting a heady and effervescent brew. The only downside to this five-song EP is just that, it’s over after five songs. The music Jay and Steve created is highly addictive. The listener’s only option is to program the CD player to “repeat” until Jay’s full-length album arrives.