As the latest version of DEATH ON THE NILE arrives in theaters, here’s a quick look at the literary and cinematic history of Agatha Christi’s beloved detective. 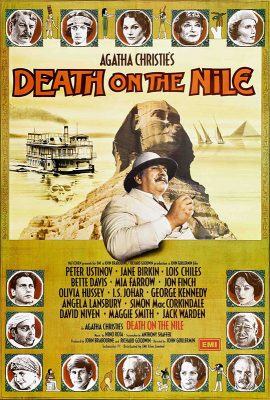 Inspector Poirot debuted in Agatha Christie’s 1920 novel the mysterious Affair at Styles.  Poirot is described as a fastidious, middle-aged Belgian man who lives in England.  He is widely praised as possibly the world’s greatest living detective.

He appeared in 33 novels, two plays and more than fifty short stories that were published between1920 and 1975.  “Curtain” was the final Poirot novel.  In all, the prolific Christie wrote at least 80 novels and stories featuring Poirot.

David Suchet starred in the acclaimed British TV series “Agatha Christie’s Poirot” that were adapted from Christie’s novels and stories.

Suchet is considered the best Poirot screen incarnation so far. 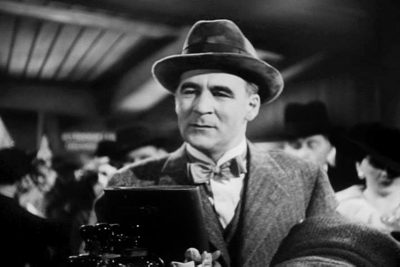 ALIBI (1931) was the first movie version of a work by Agatha Christie.  It was based on a 1928 play of the same name which itself was adapted from Christie’s 1926 novel “The Murder of Roger Ackroyd.”

A doctor who tells of Ackroyd’s murder and the subsequent investigation by Hercule Poirot narrates the story.  Unfortunately, there are no known prints extant of this film.

Austin Trevor, the actor playing Poirot (clean shaven, no less) says he was hired because he could say his lines with a French accent (although Poirot was a Belgian). 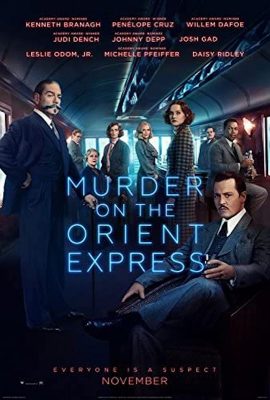 In the 1978 fan favorite DEATH ON THE NILE, Peter Ustinov portrayed Poirot after Albert Finney’s acclaimed Sydney Lumet directed MURDER ON THE ORIENT EXPRESS (1974) performance which was based on the classic 1937 novel in which Poirot’s vacation trip down the Nile is sidetracked by the murder of a young heiress, a fellow passenger on the river steamer (Ustinov played Poirot 6 more times).

DEATH ON THE NILE’S incredible all-star cast includes Maggie Smith, Angela Lansbury, Bette Davis, Mia Farrow and David Niven.  By the way, this is the highest rated Christie film on the movie site IMDB.  It remains a favorite of movie buffs including yours truly. 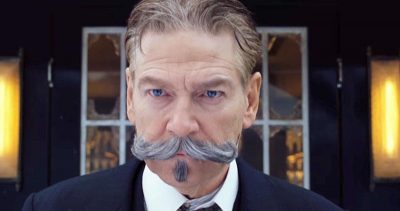 Kenneth Branagh is the latest actor to play “the little man with the enormous mustaches.”

Branagh sports the largest mustaches of all the Poirot actors.  Not only does Branagh star in MURDER ON THE ORIENT EXPRESS he directs and is set to do double duty again in the new DEATH ON THE NILE.