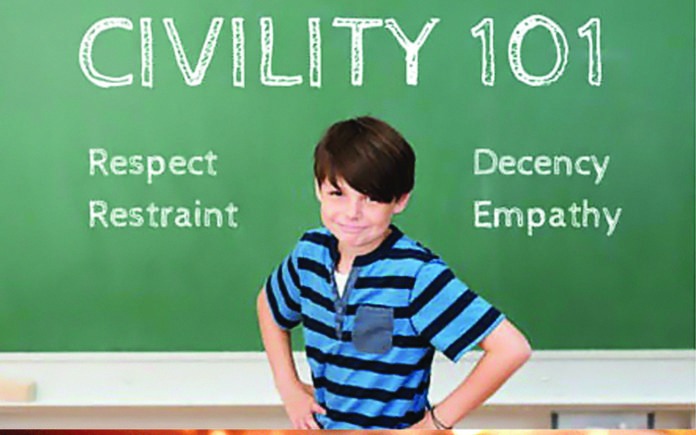 Have you notice that people are increasingly behaving badly and with less civility than in the past?

Nationally, we see a lack of civility everyday by our politicians in Washington DC as well as the talking heads debating the issue of the day on one of the cable news channels. I think we can all agree that these behaviors are deplorable and do nothing to build consensus or make our country a better place.

Locally, we had a great example of this in Cathedral City last week when the city council was considering making their city a sanctuary city. Many of those who were in favor of protections for people who are in the United States illegally, threw personal insults at those who disagreed with them. Many berated former police chief and Mayor Stan Henry, both in person and on social media, for taking a stance where he did not want to violate federal laws. Considering that Henry has spent a lifetime in law enforcement, it is logical and reasonable that he would not vote for a measure that intentionally violates federal laws. Nevertheless, those in opposition to his position threw a hail of insults at him as well as Councilman Mark Carnevale.

Professor of Civil Discourse, Charles Camosy of Fordham University, offers these ideas on how to disagree with someone without being disagreeable:

First, show some HUMILITY. For those with an uncertain grasp on the meaning of this word, Merriam-Webster defines humility as: freedom from pride or arrogance; being humble means that you behave in a modest and respectful way when around others.

Second, LISTEN to the other person’s opinion and respond without anger or personal attacks. If your words devolve into personal insults, most people will shut down and discount whatever it is you are talking about. While it may feel good to rant and behave poorly, you probably want the other person to understand and possibly move toward your viewpoint. As such, your bad behavior undermines everything spewed from your out-of-control piehole.

Third, AVOID BINARY THINKING. Reducing the issue to a simplistic “us” versus “them” emotional rant only creates an antagonistic situation. Antagonizing the other person is one of the fastest ways to undermine your position and potentially come across as a person of limited intellect who is emotionally unsteady. Most issues that garner emotional responses are often very important and very complex. As such, recognize the merits of the other position (whether you agree or not) and use your wits to help the other person better understand your way of thinking.

Fourth, avoid using DISMISSIVE WORDS or phrases as that manner of speaking is destructive toward building consensus. If you have ever watched CNN or Fox News, you have heard the loud, obnoxious point/counter-point discussions that they have every night. Inevitably, the program host will make a statement that is dismissive of their opponent’s opinion. While this may be good for ratings, it is disrespectful, lacks civility and is behavior that no one should emulate.

Last, LEAD with what you STAND for. If you cannot make your argument without belittling the other person or view, you may be inadequately versed on the topic that you stand for or intellectually too lazy to better develop your way of arguing your point.

Behaving with emotion, anger and insults reflects poorly on you and can undermine any future efforts that you may undertake to win others over toward your opinion. It can also cause people to have a lower opinion of you in the future.

In general, always try and treat others the way that you want to be treated. If everyone did this, the world and our Valley would be a better place.

Haddon Libby is an Investment Advisor, Fiduciary and Managing Partner at Winslow Drake Investment Management and can be reached at 760.449.6349 or www.WinslowDrake.com.