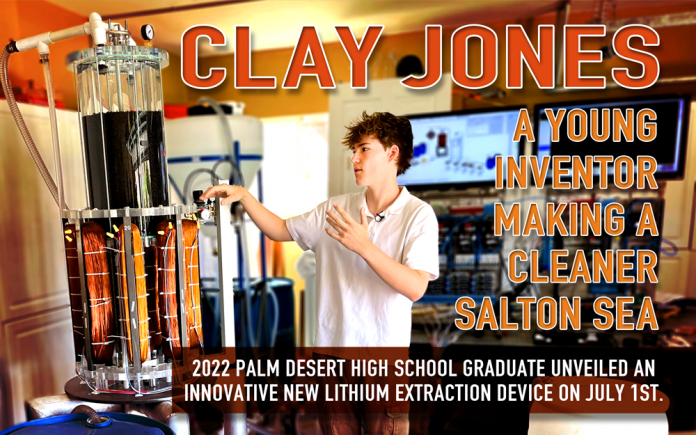 Getting your high school diploma is an accomplishment in itself, but one local Palm Desert High School graduate is taking it a step further and inventing a device that will better the Coachella Valley. 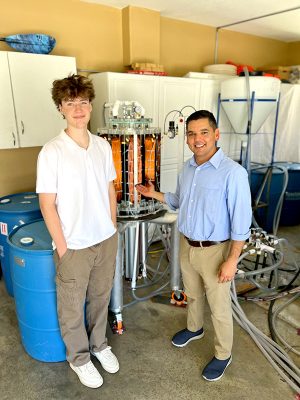 In an effort to achieve a cleaner Salton Sea and Coachella Valley environment for all, budding scientist and class of 2022 graduate Clay Jones unveiled an innovative new lithium extraction device from the garage of his Palm Desert home on July 1st.

Jones unveiled the device and generously presented the patent to members of the Salton Sea Authority, along with Congressman Dr. Raul Ruiz. Jones, who will attend UC Berkeley in the fall, first became interested in environmental science as an intern for Ruiz.

He gained notoriety two years ago when he took the remarkable step of paddling across the Salton Sea in a kayak to raise awareness about the contaminated sea and the environmental disaster looming. During the seven-hour crossing, Jones developed the idea of using photons to energize orbiting electrons, making lithium absorbing materials more attractive to lithium ions suspended in the Sea.

Jones also realized that making battery power accessible to more people by using technology that lowers the price will free many from fossil fuels and improve air quality for residents in close proximity to the Sea. After two years of dedicated work from his parents’ garage, Clay’s idea has now come to fruition. 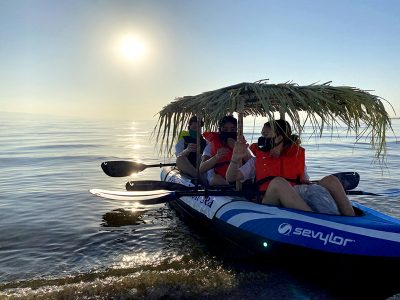 “What inspired me was the desire to help our local community. I think of the entire Valley as our community, but having said that, I felt the community surrounding the Salton Sea was being given the short end of the stick, and I wanted to help. It’s a pivotal time at the Salton Sea with Lithium Ion changing the dynamics. I’d like to see the environment and money put in the right places,” said Clay.

In his school years, Clay has always been better at math and science, especially compared to other subjects. He took Honors Physics during his freshman year at Palm Desert High, and was hooked, especially since his teacher, Mr. Letcavage, made the class engaging and Clay spent his lunch period in his classroom. 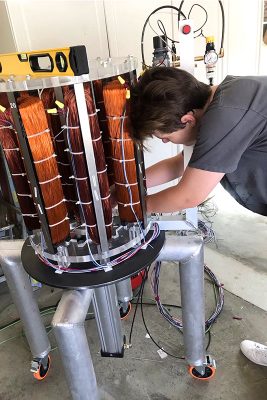 “It is a community issue affecting all of us, especially the residents around the Salton Sea. The Lithium Ion equation changes the dynamics. There is an opportunity to help the community and now the planet, but it is a public-private equity kind of thing. It is good local politicians and activists are looking at how it affects the people around the Sea,” stated Clay.

Although he has accomplished something extraordinary at his young age, Clay doesn’t consider himself an inspiration, but believes it can be found all around us from different places. He has been inspired by his father for his work ethic and Congressman Ruiz for his tireless dedication to the community. Clay’s inspiration also comes from his grandfather, who was the second Board Certified Surgeon in the entire Coachella Valley. Additionally, Clay credits Supervisor V. Manuel Perez, Eduardo Garcia, and all the local politicians he has met that work to run and improve our communities. 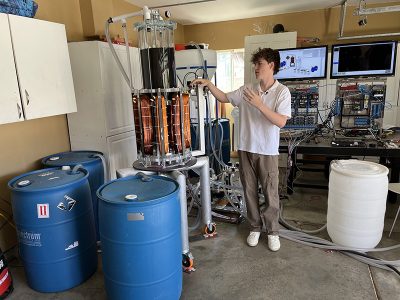 “I do not think most people realize how much it entails and how hard they work. I remember my dad telling me when I was like 8 or 9 that Dr. Ruiz forgave a lucrative medical practice to run for office to help people in our community, and that stuck with me. Success is how you treat people, in giving back,” said Clay.

Clay’s invention is expected to yield many benefits for the Coachella Valley. The commercial activity of lithium extraction will help the community with higher-paying jobs. Additionally, the benefit will be cheaper batteries, allowing more people to afford electric cars and lead to a cleaner environment.

Clay was accepted into UC Berkeley, where he will attend this fall. He even wrote in one of his college application essays to Berkeley about the conversation he had with his father regarding Dr. Ruiz giving up a lucrative medical career to help his community.

As for his future career plans, Clay is still uncertain about which professional field he wants to study, but is glad he has time to decide. After his patent pending letter, he is looking forward to seeing if a big-energy company calls him about his invention.

“If my device can help to enhance Lithium-Ion extraction, I am giving back to the Salton Sea Authority Board and the community of the Salton Sea, where money will be best spent,” said Clay.