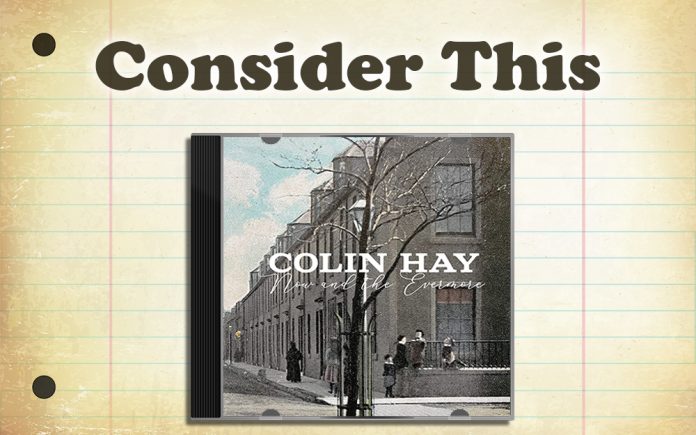 “All things are never equal, an’ I don’t know who is keeping score, nobody gets a sequel, no, everyone gets shown the door, I’ll be counting on the rising sun to give me all my waking days, until it sets upon the now and evermore.”

That’s Colin Hay wrestling with mortality on the title track of his latest album.

Colin is such a consummate Pop craftsman that it sometimes feels as though the world takes him for granted. He burst on the music scene exactly 40 years ago, fronting his band, Men At Work. After three chart-topping records, they called it quits in the mid ‘80s and Colin was on his own. In the ensuing years, he has managed to carve out a respectable solo career.

Born in Scotland, his family immigrated to Australia when he was in his early teens. A few years later he and Ron Strykert formed an acoustic duo and began performing in Melbourne. Inspired by a construction sign they dubbed themselves Men At Work. Soon enough, they recruited bassist John Rees, drummer Jerry Speiser and multi-instrumentalist Greg Hamm (keys, sax and flute).

For the next couple of years, Men at Work plied their trade playing Australia’s Pub circuit. An extended stint at The Cricketers’ Arms Hotel saw their popularity skyrocket. During this era, they became the highest paid, unsigned band in the country. By 1981, they’d inked deal with the Australian division of Columbia Records.

Their debut, Business As Usual came out in Australia later that year and was released in Spring, 1982, everywhere else. Rather fortuitously, the fledgling 24-hour music channel, MTV was less than a year old and desperate for content. They immediately embraced Men At Work’s clever and quirky videos for songs like “Who Can It Be Now” and “Down Under,” both clips went into heavy rotation.

The band’s sound was a vibrant alchemy of springy New Wave, grotty Pub Rock with a soupcon of Reggae. Sly and subversive lyrics about “fried-out Kombis” and “vegemite sandwiches,” synchronized with indelibly catchy melodies. Their exposure on this new medium paid off, the album shot up the American charts, spending an astonishing 15 weeks at #1.

The five-piece had already headed into the studio to record a follow-up, but Columbia delayed it’s release, milking everything they could from Business… which wound up winning the band a Best New Artist Grammy in 1983. When Cargo arrived a month or so later, it garnered enthusiastic reviews and cemented the band’s success, peaking at #3 on the Billboard charts in the U.S. and hitting #1 in Australia.

Back when the band was first gaining traction, they toured as openers for bands as disparate as The Clash and Fleetwood Mac. With the release of Cargo, they were suddenly headlining world tours. Overwhelmed by their sudden success, the band made a conscious decision to take most of 1984 off. Despite the respite, when the Men returned to the studio to record a third album, they were plagued by infighting. John and Jerry opted to ditch the band, leaving Colin, Ron and Greg to carry on as a trio (augmented by studio musicians). Unfortunately, 1985’s Two Hearts was greeted lukewarm reviews and lackluster sales. Men At Work quietly disbanded the following year and in 1987, Colin embarked on a solo career.

His debut, Looking For Jack, delivered his trademark mix of trenchant lyrics, coupled with sharp melodies that dazzled critics, But sales-wise, the album sunk without a trace. So, Colin set about reintroducing himself to the 15 million people who had been Men At Work fans.

First, he relocated to Los Angeles. Then he began booking acoustic shows in small venues, the more intimate settings allowed his quick-witted personality to shine through. His sophomore solo effort, Wayfaring Sons arrived in 1990 via the MCA label. It marked his final major label foray.

Throughout the ‘90s and into the early aughts, he released a series of intriguing albums, Peaks & Valleys, Topanga Transcendental Highway, Going Somewhere, Company Of Strangers and Man At Work, through his own Lazy Eye imprint. He also cultivated a passionate and fiercely loyal fan base through his live shows. Something of a raconteur, the yarns Colin spins between songs are just compelling as his music.

One ardent fan from this era was actor Zach Braff, from the hit series, Scrubs. The pair struck up a friendship and he began inviting Colin to act and perform on his show. When it came time to curate the soundtrack to Garden State (the 2004 film that marked his directorial debut), Zach included a clutch of au courant artists like Coldplay, Frou Frou, The Shins and Zero 7. But it was Colin’s heartrending “I Just Don’t Think I’ll Ever Get Over You,” that stood out from the pack, earning him renewed attention from the music business.

Capitalizing on his slightly raised profile, Colin continued his usual cycle or writing, recording and touring. Between 2007 and 2018, he extended his critically acclaimed streak with albums like Are You Looking At Me, American Sunshine, Gathering Mercury, Next Year People and Fierce Mercy.

Somehow, he also found time to appear on competing late night shows, Jimmy Kimmel and The Tonight Show With Jimmy Fallon. He was even the subject of the 2015 documentary, Colin Hay: Waiting For My Real Life. At the height of the pandemic, he managed to release a charming covers collection, 2021’s I Just Don’t Know What To Do With Myself.” Once restrictions began to lift, it was business as usual, and he recorded his 15th solo effort, Now And The Evermore.

The record opens with the one-two punch of “Now And The Evermore” and “Love Is Everywhere.” The aforementioned title track is powered by a rippling drum salvo (courtesy Sir Richard Starkey, a.k.a. Ringo Starr), jangly guitars, twinkly toy piano, cheeky glockenspiel, meandering mellotron and a fab and flirty brass fanfare. A bit of carpe diem, the lyrics allow that we’re all a part of the space-time continuum; “…..Everything’s a circle dance, and we have been here many times before, and we’re all a part of the now and the evermore.” So, while we’re here, to paraphrase Janis Joplin, “we better get it while we can.” The song winds down with militaristic precision, as flashy brass flourishes flutter atop a brisk martial cadence, finishing off with brisk hi-hat ting. “Love…” is optimistic and anthemic, an open-hearted encomium to the power of love. Whirring keys connect with braided acoustic and electric guitars, throbbing, up-front bass, ascending strings and a solid backbeat. Dialing back his penchant for tart ripostes, Colin waxes sincere; “Ain’t nobody gonna bend my will, can’t stand still or stop until love is everywhere, ain’t nobody going to stop this train, the tracks laid bare and will remain, love is everywhere, ain’t nobody gonna make me hide, you can’t kill what I feel inside, love is everywhere.” On the break strings swell beneath a churchy Hammond B3 solo just ahead of ecclesiastic backing vocals

In a record stacked with superlative tracks, a few stand apart from the pack. “Agatha Bell” is a sunny and sinister saga of a predatory wife. Rumbling electric riffs partner with plangent acoustic licks, wily bass lines, cheery Hammond B3, over a tambourine shake, percolating bongos and a sturdy beat. Lyrics spin a Black Widow web of matricidal mayhem, all delivered in Colin’s trademark deadpan; “Agatha Bell, she married very well, he was the son of a self-made man, Agatha Bell said he got swept away, he was lost to the fast and freezing waters, Agatha Bell thought there’d be hell to pay, so she dressed in black and knelt to pray/’Please Lord, send me another, a much better looking one, make sure he’s a better lover, won’t that be fun, so for Agatha Bell, it ended very well, and Agatha fell in love again.”

The graceful “Undertow” layers searing slide guitar, sun-dappled acoustic riffs and shimmering strings atop fluid bass lines and plumy percussion. There’s a desolate catch in Colin’s voice, mirroring lyrics that address someone just out of reach; “Your dreams are free, do you hear me when I call? You can hold onto me in the stillness of the night.” The watery imagery feels like a panacea that penetrates the understated grief at the core of the song.

Meanwhile, “A Man Without A Name” is a rollicking Cha-Cha-Cha that that weds swooshy keys, pulsating horns, chiming guitars and tensile bass to a bongo-riffic beat. The sprightly melody and snappy arrangement belie lyrics that tell the tale of an anonymous altruist at the beginning stages of Alzheimer’s. While his philanthropic impulses remain intact; “I could buy the latest Cadillac for people I don’t know, but it’s not the same as I remember long ago,” he can’t comprehend how he’s lost the thread; “now I’m standing in the wings of understanding, I’m just waiting for you to show, I still can’t answer or explain how I got here or became the man without a name.” A Cuban Tres solo adds a courtly kick to this effervescent cut.

The action slows on a couple tracks, “Starfish And Unicorns” and “Into The Bright Lights.” The former is a wistful reverie that blends cascading keys, gossamer strings, liquid bass and incandescent guitars. Colin quietly addresses a long-lost love; “I can see you now like it was yesterday, and our love was an imperfect love, our horns ever locking, there were years of not talking/Innocent of heart, it was us against them, then you went and left us, to carry on until the end.” Strings swoop and shiver, bookended by willowy guitars on the break.

The latter is a minor key masterwork. A keening slice of melancholy anchored by see-sawing slide guitar, prickly tres, a lofty string section and syncopated horns. Lyrics capture that plummeting sensation when we surrender to love; “Soar from the moonlight, straight to the sunrise, this will be our time, to free fall and nosedive/Out of the black night, into the bright lights, with the whole world in our sight like a miniature paradise.” Ethereal strings alight on the break, tangling with peppery horns and stinging electric guitar, shepherding the song to its majestic conclusion.

Other interesting tracks include “The Sea Of Always,” a resolute Rocker that reminds us destinies; “No one will come save the day, you are your own forgiver…” we are in charge of our own destinies. Then there’s the Celtic lilt of “All I See Is You.” The album closes with the Countrified heft of “When Does The End Begin.”

No one would ever accuse Colin of being a wide-eyed Pollyanna. But after the sturm und drang of the last few years, he chose to keep on the sunny side with this record. Recently, he noted “I’m deeply grateful for the life I have, and I think my natural tendency has always been toward optimism and humor. Lately though, I’ve had to be more intentional about it, I’ve had to actively seek out the positive, to let new rays of hope shine on some seemingly dark situations.” Mission accomplished. Now And The Evermore” is a lovely and buoyant collection of sweet songs. Naturally his sly wit peeks through the sunshine, but his Pure Pop magic offers up an aural anodyne for these uncertain times.