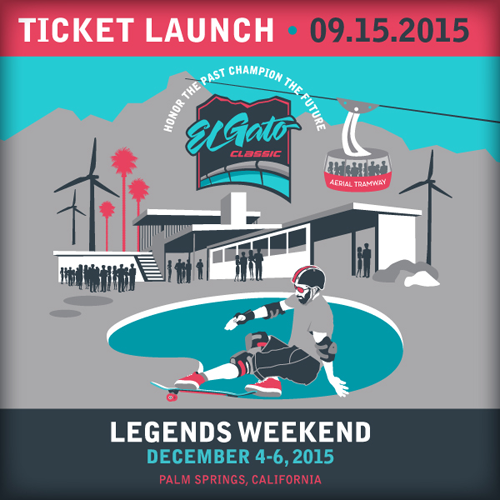 More than 100,000 residents and visitors are expected in downtown for the parade, which kicks off at 5:45 p.m. on Palm Canyon Drive and Ramon Road. Hawk will be in town as the main draw for the 2nd Annual El Gato Skateboard Competition and Block Party, Dec. 4-6 at the Spa Resort Casino. He is thrilled to be part of the parade, which every year includes magnificent marching bands and twinkling holiday floats adorned in thousands of colored lights. In addition, some of Hawk’s world famous skater pals will join him in the parade riding in a giant, twinkling Vans shoe.

Other parade highlights always include the wildly popular Macy’s-style holiday balloons along with Santa and his reindeer on the spectacular Jackie Lee Houston Santa Claus Express.
“Tony Hawk is a fabulous addition to the Festival of Lights Parade and we are excited he will be joining us for this one-of-a-kind holiday event in downtown. A big thanks to the El Gato team for bringing Tony to our community to share his talent and passion for skateboarding this holiday season,”  said Tim Ellis, Vice-Chair of P.S. Resorts, a group of large hoteliers who are the Presenting Sponsor of this year’s Festival of Lights Parade and the El Gato Competition. Other sponsors include the Agua Caliente Band of Cahuilla Indians and the Spa Resort Casino.

“The Palm Springs Festival of Lights Parade is the biggest and best holiday parade in the entire Coachella Valley,” says Mary Jo Ginther, Director of the Palm Springs Bureau of Tourism, “Bring the whole family, your skateboarding enthusiasts and visit downtown on Saturday, Dec. 5 as we celebrate the spirit of the holiday season in Palm Springs, like no place else.”

About 50 students who participated in the 23rd annual City of Palm Springs Holiday Banner Program will be celebrated for their uniquely original designs lining Palm Canyon Drive during the holiday season at the annual Banner Awards on Thursday, Dec. 3 in the Uptown Design District.

The ceremony, hosted by Mayor Elect Rob Moon and Main Street Palm Springs President Joy Meredith, the co-founder of the program, will be held at 4 p.m. in Frances Stevens Park, just prior to the 5:15 p.m. lighting of the City’s spectacular 22-foot Holiday Tree.

About 100 banners, hand painted by students from Kindergarten to 12th Grade, are displayed along Palm Canyon Drive each year with over 50 new and original designs added to the collection annually. Almost 900 area students have submitted original drawings this season. This year’s theme is “Winter Holidays, Palm Springs Style” with a special emphasis on Palm Springs landmarks. In addition, a popular People’s Choice Award is decided by the most “likes” on the Holiday Banner Facebook page.

“We are thrilled to celebrate the incredible efforts of these talented students who bring our residents and visitors so much joy every year with their uniquely original designs during the holiday season,” said Meredith. “These artistic banners are truly a part of the magic that makes Palm Springs like no place else and I invite everyone in the Coachella Valley to visit downtown this holiday season to see them for yourselves.” 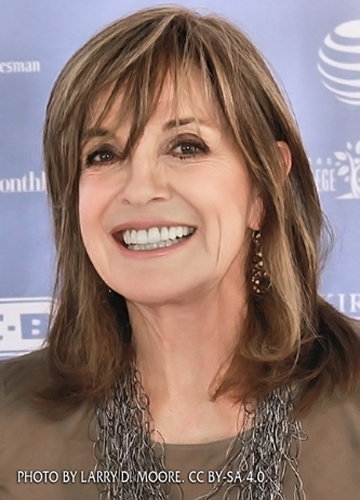 Not only will actress Linda Gray join the City of Palm Springs at the Official Holiday Tree Lighting on Thursday, Dec. 3, she will then head to the Hard Rock Hotel in downtown the following night to join ACT for Multiple Sclerosis at their star-studded Celebrity Holiday Tree Live Auction Fundraiser, which returns to Palm Springs for a second successful year after 12 years down valley.

The event, featuring a spectacular display of celebrity holiday trees by well-known designers, is currently underway at the Hard Rock Palm Springs until Friday, Dec. 4, when a live auction party will be held from 5 – 7 p.m. Actress Ruta Lee, a Palm Springs resident and long-time supporter of ACT for MS will host with the help of CBS Local 2’s Patrick Evans leading the live auction.

Holiday trees will be up for auction from well-known local celebrities including Lee, Carol Channing, Fred (The Hammer) Williamson, Bella da Ball and many more. Gray’s spectacular holiday tree, dubbed “Christmas at Southfork,” will have a western theme, inspired by her long-running CBS television series “Dallas.”

In addition, a Holiday Boutique featuring mini-trees and wreaths will open in advance of the live auction at 4 p.m. All proceeds go to ACT for MS. The fundraiser, founded by the late Palm Springs entertainment and society journalist Gloria Greer in partnership with Merv Griffin, has become a much loved signature holiday event in the city.

“With excitement echoing around the world about the new Hard Rock Palm Springs and the city it is located, we are thrilled Christmas Tree Lane will return to Palm Springs for a second year,” said event chairwoman Linda Williamson. In fact, Williamson notes Christmas Tree Lane has been a desert holiday tradition since Griffin first asked his celebrity friends to allow top designers to create Christmas trees themed after them at his Merv Griffin Hotel, now the Parker Palm Springs, and later sold them at live auction with the proceeds benefitting ACT for MS.

“The City of Palm Springs and the Hard Rock Hotel are thrilled to host Christmas Tree Lane in support of ACT for MS,” said Mary Jo Ginther, Director of the Palm Springs Bureau of Tourism. “I encourage everyone in the Coachella Valley and beyond to visit downtown Palm Springs over the next week and check out these one-of-a-kind designer trees – and perhaps even take one home.”

VIP tickets are $100, premiere seating is $75 and regular seating is $50. Advanced reservations are required. For tickets, visit www.actforms.org.