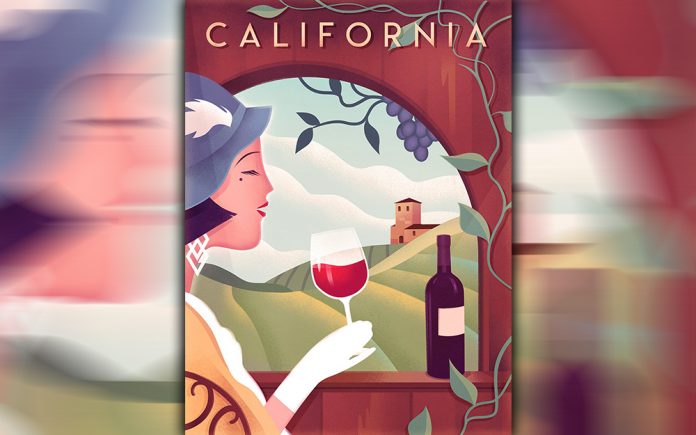 I bet that if I offered one hundred dollars to each of you readers to tell me correctly the top three best-selling California red wines, you’d be on that project stat and probably come up with the correct answers.

Not that we need a review of the obvious, it is interesting to note that—even this day, where every state in the Union produces wine, California still dominates US wine production, providing 81% of the country’s output. Indeed, even if we go global, California would emerge as the fourth largest wine producer after Italy, France and Spain.

And in our Golden State there are 5,900 grape growers in 49 of its 58 counties; and there are 139 AVAs (American Viticultural Areas) with some 110 varieties grown. All we asked was to name the top three red wine varietals grown and sold in our state.

You don’t have to look around too long to figure out that Cabernet Sauvignon is the most popular red wine sold. It’s the second most widely planted wine grape in the state after Chardonnay. And as you know, the best-known plantings are concentrated north and south of San Francisco in warm wine regions with significant temperature fluctuations between hot days and cooler nights.

And if you’re playing wine trivia at the wine bar, do remember that the first vineyard-designated Californian wine was Heitz, Martha’s Vineyard 1966 from what would become Oakville AVA in Napa Valley. At the time, the winery’s regular bottling was selling for around $1.65; for the new Martha’s Vineyard, the cost flew up to $7 a bottle!

The second most popular red wine is fairly easy as well. Just check out the shelves at the wine section and you’ll see Pinot Noir taking up almost as much space as Cab. Also, one could have looked to France for a big clue: The French has always touted that Cab Sauv (Bordeaux) is the King of Wines; and Pinot Noir (Burgundy) as the Queen of Wines.

Although most quaffers enjoy several popular red varietals, many are in one of two “camps”: the Cab Sauv camp, where given the option they will always prefer a Cab over a Pinot; or, the Pinot Noir Camp where those folks desire the opposite. Cab fans love the “power” of the dark fruits; the Pinot fans love the “finesse” of the reds.

Picking out California’s third most popular red wine could pose a little problem. There’s Merlot, Malbec, Syrah, and Petit Sirah among others, but if one thinks of the “quintessential” California grape (via Croatia), Zinfandel is the beloved.

Zinfandel grows all over but is concentrated in the north and central part of the state, especially in the Gold Counties of El Dorado and Amador in the Sierra Foothills. It was the most widely planted red variety in California until Cabernet Sauvignon overtook it in 1998. And of course, a large proportion of the fruit is used for white/blush Zinfandel. The oldest documented grape vines in the state are the Zinfandel vines in the Grandpere Vineyard in Shenandoah Valley, Amador County, planted in 1869.

It seems that the new year wine theme is all about simply enjoying a nice comfortable red wine. We did Italian last week; we’re doing California now. And of course, what makes a wine very comfortable is if it is a reasonably priced one! We’ll keep it under $30.

2018 Domaine Carneros, Avant Garde Pinot Noir. ($30). When we recommended the

Domaine Carneros sparkling wines last month, we said of their porfolio at any price level, you were getting world class stuff. Ditto that for their Pinot porfolio. With grapes sourced from all five of the producer’s Carneros estate vineyards, the wine is aged for eight months in Burgundian oak and features fresh pomegranate followed by sweet cherries, red raspberry, warm oak, and cinnamon. It’s classic Carneros with bright berry flavors. It’s the Pinot hit of the month!

2018 Wente, Southern Hills Cabernet Sauvignon, San Francisco Bay ($14) I used to always visit the Livermore Valley vineyards when staying in the Bay Area. Lots of wine history there. This Cab is the deal of the month! Floral scented nose of lavender and fresh leather that moves to an elegant palate with very present dark fruit, chocolate & blackcurrant tart with a hint of spice. This is full-bodied, very smooth with a creamy texture. Silky tannins influence and carry the rich flavors through a lingering finish. It’s 78% Cabernet Sauvignon, 19% Petite Sirah, 3% Petit Verdot.

2018 Giornata, Barbera, Paso Robles, California ($25) California Barbera is a real treat for Italian wine lovers: you get the best of both worlds. I remember the Louis Martini North Coast Barbera wines that sold for only $5 but were the bomb. Who has control of those vineyards now!? Paso Robles is front & center with their La Bomba Barbera. There’s an inviting nose of blackberry, dark cherry, and hints of Italianesque liquorice. The palate is packed with juicy dark fruits, bright red berries and red currants with underlying clay and earth elements. Is this a sexy wine, comfy or what!?