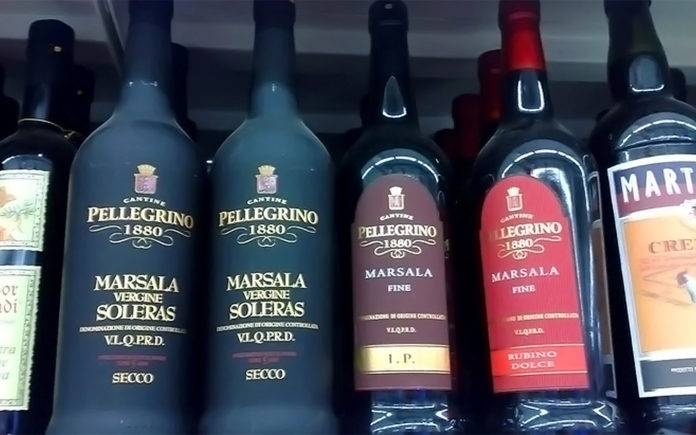 This last summer my wife and I had the fun opportunity of visiting the island of my grandfather’s birth, Sicily. You’ve all heard the wonderful stories and reports of the sights & sounds of that ancient isle along with enjoying the magnificent cuisine that includes everything from Blood Orange, Fennel & Red Onion Salad atop a Baked Anelletti Pasta in Palermo to the north and the tastiest swordfish fresh from the waters off Siracusa in the south.

Along with those places mentioned above, we continue to hear or read about Messina, Campania, Corleone, Taormina, and of course, the active volcano, Mt. Etna, in every other travel and food magazine around. But I’ve haven’t seen a piece on the Marsala region in a long while: time to remedy that!

Actually, my angle here of course is to really talk about Marsala wine. So, when was the last time you, your family, your neighborhood or your wine friends enjoyed a nice glass of the stuff? Yesterday? Last month? Two years ago? When? … (Sorry—think I’m watching too much Colin Cowherd).

Anyway—perhaps you know or not, Marsala wine is properly produced in and around the city of Marsala and region, which is located in the way western part of the island. For as much as we Americans are familiar with Chicken Marsala, most California wine enthusiasts (especially Trader Joe’s customers) will probably mention nero d’avola, malvasia, and maybe novello, or grillo as a Sicilian wine before they blurt out Marsala.

Prior to the red-wine revolution of the ‘90s, Sicily was known principally for its sweet and fortified wines, especially Marsala. Never mind the cheap Marsala used to sauce veal cutlets or flavor zabaglione cakes (sorry—unless you use the good stuff for your cooking and baking) or the premixed combos made with egg cream. This is a wine that once stood alongside Sherry, Madeira and Ports one of the great fortified wines of the world.

The times I mention Marsala around the wine bar, I get looks that say it sounds too sweet and an old type of wine to be thought about presently. (A couple of years ago, I did an article on Sherry wine, titled “My Sherry Amour”–received a good response from many, but did get a few comments like, “Sherry is for grandparents!” or “When did this column become a history report?–we’re drinking Cabs and Pinots this century!”) Hey!—we’re wine lovers, not haters! Drink Up! Cheers!

And a very good dry Marsala will fit somewhere between Sherry and Madeira with its toffee, fig, and raisin flavors. But don’t get scared off—the “dry” version indeed carries those flavors but with appealing complexities. One good reason is that the stuff is aged in casks before release, thus it’s matured in the cellar not in the bottle.

It’s wonderful as an aperitif poured neat or on ice; Marsala pairs amazingly well with food, especially potent dishes like strong cheese, curry and the salty seafood preparations that we find from its home region in Sicily. And like Madeira and Sherry, small serving amounts are the norm, and, leftovers in the bottle will last for a long time.

There’s no question that Marsala shows itself in different styles and quality and for that reason, is a confusing category—so we vino heads have reason for not completely grasping what Marsala is. The discussion can get a bit nerdy—but, you may be interested.

The wines are categorized according to three variables: color, age, and sweetness level. All Marsalas are either oro (gold), ambra (amber), or rubino (ruby), depending on the grapes they come from: Oro and ambra versions are made from white varieties—the preferred grillo or the prolific catarratto; the rarer rubino versions are made from blends of red grapes that includes your favorite nero d’avola and/or nerello mascalese.

The age categories are Fine, Superiore, and Vergine/Soleras. Fine Marsalas are the simplest, aged only one year. Superiore are more luxurious with two to four years of aging. Soleras are most complex with aging five and ten years.

Then we have the secco, semi-secco, and dolce as to sweetness levels. However, Soleras Marsalas are always dry—the ultimate sexy and sophisticated sipping drink with oxidative notes of caramel, nuts, spice, orange peel, and other exotic flavors. A good Soleras has the unctuous aroma of sweet wine, but in the mouth, it is bone dry.

What Marsala gets you to understand is the fortification aspect: Cooked-down musts, or blended brandies are generally used to stop fermentation and add alcohol to most fortified wines. However, as with great Vintage Ports, Soleras, and some Superiores, only use straight brandy—quality brandy, which is added to produce a naturally sweet, powerful wine from exceptionally ripe grapes.

Fortunately, I was invited to lengthy Sicilian dinner with the folks from the DeBartoli Vecchio Samperi estate, who are well-known artisan producers of Marsala. Their particular Soleras have the added distinction of being unfortified: they reach the minimum of 18% alcohol naturally, picking up their lusciously concentrated flavors from decades spent in wood; easily enjoyed before, during, and after a meal.

Finding a bottle of 10-year-old Soleras Marsala around these parts is tough. If you’re serious, email me and I’ll get a connection for you. In the meantime, for a quick tiramisu (a pick-me-up), you can find the inexpensive Incanto Fine Dry Marsala at Trader Joe’s for under five bucks. Simply pour on ice—it’s a little decent hint of what can be. Saluté ’. Contact Rick at winespectrum@aol.com