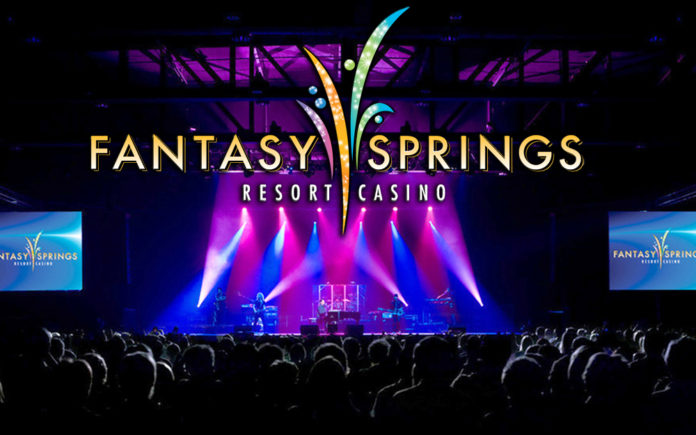 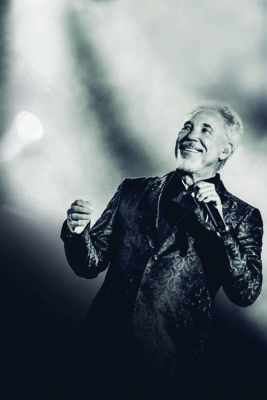 Fantasy Springs Resort Casino regretfully announces that the Tom Jones concert scheduled for Friday, September 29, 2017 has been rescheduled. The concert will now take place on Friday, May 25, 2018.

Following medical advice, Tom Jones has announced that he will unfortunately be postponing his US tour, which was due to arrive at Fantasy Springs Resort Casino on Friday, September 29, 2017.

The show has been rescheduled for Friday, May 25, 2018. Ticketholders will have until Saturday, September 30, 2017 to request a refund or keep their tickets, which will be valid for the new show. Tickets for the May 25, 2018 show will go on sale on Friday, October 13, 2017. If ticketholders would like a reprint of their tickets with the new date, the Fantasy Springs Box Office will be happy to do so only after the tickets go back on sale to the public.

Tom sends his sincere apologies to his fans and looks forward to seeing them all again next year.

Ticket holders with any questions should contact the Fantasy Springs Resort Casino Box Office at 800-827-2946. 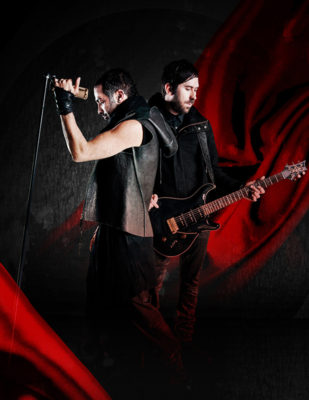 Adored by fans in not only their native Mexico but also here in the United States, pop-rock duo Camila has played all over the world from their home base in Southern California to the millions that have attended their concerts, and now they’re set to hit the stage at the Special Events Center at Fantasy Springs Resort Casino on Saturday, September 23, 2017.

Founded by award-winning composer, singer and producer Mario Domm, Camila made its official debut as a trio in 2005 when Domm signed his first record contract with Sony Music, together with his friends and colleagues Pablo Hurtado and Samo. Camilo released their first album Todo Cambió in 2006 and their second album Dejarte de Amar in 2010. These albums were massive hits that turned the group into one of the most successful recording artists in Latin America.

Since their meteoric rise, Camila has soared to the top of the charts in Mexico and beyond. Songs like “Abrázame,” “Coleccionista de Canciones,” “Todo Cambió,” and “Bésame” have made them big winners in the record industry. They’ve sold over two million albums, have three Grammy Awards, three Billboard Awards, and have both Diamond and Platinum certifications. They’ve played hundreds of shows in 18 countries in front of more than two million fans. Camila has also worked with international stars like Colbie Caillat, Kenny G, Alejandro Sanz, Alejandra Guzmán, and Wanessa Camargo.

In 2014, Camila launched a third studio album, Elypse, transforming itself from a trio to a duo. They’ve won four Latin Grammy Awards and have received four Latin Billboard Awards. Today, Mario Domm and Pablo Hurtado make up the group that is so loved by its loyal fans and one that has embarked on a new chapter of success. 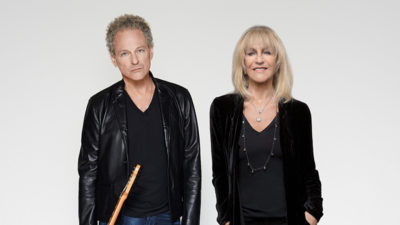 On the heels of a sold-out critically acclaimed summer tour, longtime Fleetwood Mac members Lindsey Buckingham and Christine McVie have announced a second leg of their North American tour, and they’ll be making a stop at The Special Events Center at Fantasy Springs Resort Casino on Friday, October 20th.

Lindsey Buckingham and Christine McVie’s current collaboration began three years ago, when McVie rejoined Fleetwood Mac for the group’s “On With The Show” tour. The pair went into the studio to record new material prior to rehearsals for the tour and their natural creative energy was reignited. According to Buckingham, “We were exploring a creative process, and the identity of the project took on a life organically. The body of work felt like it was meant to be a duet album.” The result was a 10-song album of all new material simply called, LINDSEY BUCKINGHAM/CHRISTINE McVIE.

Connecting their natural singer-songwriter skills together came easily for the duo. Said Christine McVie, “We’ve always written well together, Lindsey and I, and this has just spiraled into something really amazing that we’ve done between us.”

The October 20th Lindsey Buckingham and Christine McVie show at Fantasy Springs Resort Casino will feature some of the vibrant new material from their new album, plus they’ll play their favorite Fleetwood Mac classics. It’s not often that rock legends depart their comfort zones and pair off for experimentation, but Buckingham and McVie have just enough of it, plus just enough of the familiar, to make for a truly memorable evening of music at The Special Events Center. 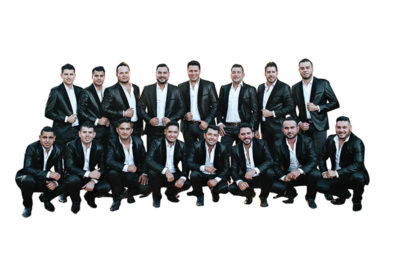 Youth, power and talent are three words that are often used to describe Banda MS de Sergio Lizárraga, or Banda MS as they are known to their millions of fans. In their 14-year career, they have become titans of Regional Sinaloa Music and they’re bringing their big sound to The Special Events Center at Fantasy Springs Resort Casino on Sunday, November 12, 2017.

Formed in 2003 in Mazatlan, Sinaloa (the “MS” of their name) by fifteen teenagers from various different music groups who decided to form their own band, Banda MS released their first album No Podrás in 2004 after having added a singer to become sixteen members. A year later they released their follow-up album Mi Mayor Anhelo, containing the single of the same name that was awarded Best Song of the Year by a major Mazatlan radio station.

Banda MS hit the big time with their 2006 corridos album La Raza Contenta with the hits “El 24” and “Chuy y Mauricio.” Their follow-up album in 2007, Escuela de Rancho, featured the smash hit single “El Bechón,” a song that became a high point in the band’s career.

The sixteen musicians who make up Banda MS love to make music with faith and conviction and know that those qualities come through in their performances. Today, the group is not only representative of Sinaloa music, but has become representative of Ranchero culture and folklore. They appreciate that they have come a long way but acknowledge that there’s so much more they want to accomplish.

TWO TITANS OF HIP HOP, JA RULE AND ASHANTI, TEAM UP FOR ONE MEMORABLE NIGHT OF MUSIC AT FANTASY SPRINGS ON NOVEMBER 17 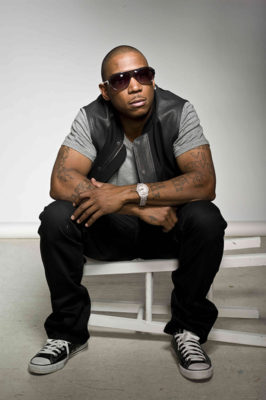 Fans of Ja Rule and Ashanti have something to get excited about this November. With dozens of unforgettable hits between the two of them (including several exceptional collaborations), they’re now teaming up for one memorable night of music at the Special Events Center at Fantasy Springs Resort Casino on November 17, 2017.

Queens native Ja Rule burst onto the music scene in 1999 with his debut album Venni Vetti Vecci, featuring the single “Holla Holla.” From 1999 to 2005, Ja Rule scored several Billboard Top 20 hits including “Between Me And You” with Christina Milian, “I’m Real (Murder Remix)” with Jennifer Lopez and “Wonderful” with R. Kelly and Ashanti. Over his career, Ja Rule has sold an amazing 30 million records worldwide and was the best-selling rapper in 2001. 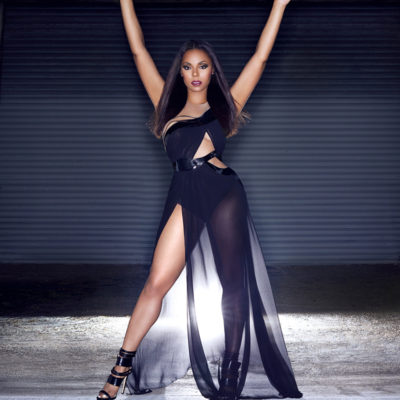 Grammy-winning singer/songwriter, actor and author Ashanti first debuted with her smash hit, self-titled debut album Ashanti. With her song “Foolish” from that album, she also secured the Number One spot on six Billboard charts simultaneously. In addition, Ashanti won the Grammy that year for Best Contemporary R&B Album. Her follow-up album, Chapter II, debuted in the Number One slot and spawned two Top 10 singles. As an entrepreneur, she’s created the record label Written Entertainment and as an actress she’s dazzled in such films as Coach Carter, John Tucker Must Die and Resident Evil: Extinction. She is also an Executive Producer with her films Mothers and Daughters (2016), and Stuck (2017).

Ja Rule and Ashanti’s reunion is fitting since both ruled the summer while at Murder Inc. Records during the 2000’s. The dynamic duo had several chart-topping hits together including “Mesmerize,” “Down 4 You,” “Happy,” “Wonderful” and the Grammy-nominated summer banger, “Always On Time.”