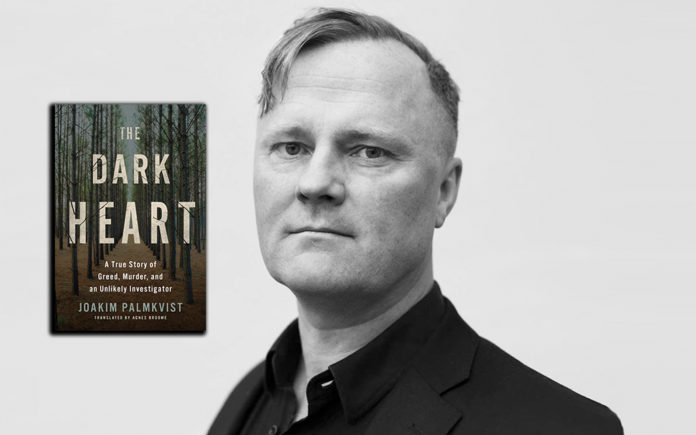 A small-town family man may have anonymously claimed the recent 1.5 billion dollar Mega Million jackpot.  It is not hard to imagine that he and his family’s lives are most certainly going to change.  In Joakim Palmkvist’s The Dark Heart: A True Story of Greed, Murder and an Unlikely Investigator (AmazonCrossing, 303 pages) a family’s wealth is their undoing.

The story takes place in the farmlands and forests of southwest Sweden.  Extensive real estate holdings, family businesses and a fortune is set to be passed to the next generation.  When the eldest daughter Sara, starts dating Martin, the tenant farm boy whom her father dislikes, he threatens to divide her share and revoke the boy’s family’s land lease.  But before that can happen, the father goes missing.

This Swedish true crime took place in 2012.  Millionaire landowner Goran Lundblad disappeared without a trace.  Sara, his first-born daughter who worked with her father every day and lived nearby was not concerned about his disappearance.  Maria, Lundblad’s youngest daughter, who lived in the city, was very concerned and contacted the police.

The police searched his home and checked if her father might have traveled abroad, but there was no sign of Lundblad.  The police declared Lundblad a missing person.  His daughter Sara and boyfriend Martin were the main suspects.  They moved into his house and did suspicious renovations removing wallpaper and flooring.  However, there was no body, no crime scene and no evidence.

The police were stuck.  It was corpus delicti, a crime must be proven to have occurred before a person can be convicted.  There would be no way to secure a conviction with only vague circumstantial evidence.  They needed a body.  Without it, the case went cold.

As a child, Therese Tang always dreamed of being a cop.  But instead she was discovered by a photographer as a teen and became a model.  Not high fashion, but ads, catalogues, hair and makeup.  She became a fashion stylist and lived a glamorous life.  But she quit to be home with her three children.  She took a job at a nearby nuclear plant.

When there was an opportunity to help search for a missing person, Therese found her calling.   Dedicated and intuitive, she became the chief operating officer of the regions Missing People Sweden.  She and her team became known for always finding those for whom they searched.

Maria reached out to Therese to help her find her father.  Therese felt certain she knew who the killer was, but she would need to find the body for a conviction.   In doing so, Therese risked her own life to get the murderer to confess and discover the remains of the missing man.

This Swedish true crime reads like a fictional suspense thriller.  At times, I completely forgot I was reading an actual murder case. Therese is a wonderful and provocative character like in a popular suspense series.  I was so looking forward to her next case – oh wait, she is a real life person!

There were several twists and turns and multiple suspects, as the small community feared there was a murderer or murderers living amongst them.  The complications were intriguing as the suspect’s lives unraveled.

Author Palmkvist admits to taking some creative liberties constructing the narrative.  He culled the story directly from police reports, documents, transcriptions and interviews to compile a cohesive, coherent and compelling story.

Credit is also due to Agnes Broome, who translated the manuscript into English.  There are a few places where word choice stood out but only enough to make me realize that the book was indeed translated which reminded me how difficult it is to do that job well.

I enjoyed my trip to Sweden via this crime story.  It’s always fascinating to enter a world and see how things work there.  One and a half million crimes are reported in Sweden every year.  That includes everything from stolen bicycles to violent crimes.

There are between 80 and 100 murder and manslaughter cases a year and almost all are solved.  The country’s law enforcement personnel is around 28,000.  Of that, fewer than 20,000 are trained officers, the rest are civilians. The justice system is different from the US, especially when it comes to time served behind bars.

I’m looking forward to the inevitable Swedish film version of The Dark Heart.

Some things are the same all around the world like love, family and greed. Hopefully, for the billionaire lottery winner, the money will be a blessing and not a curse.