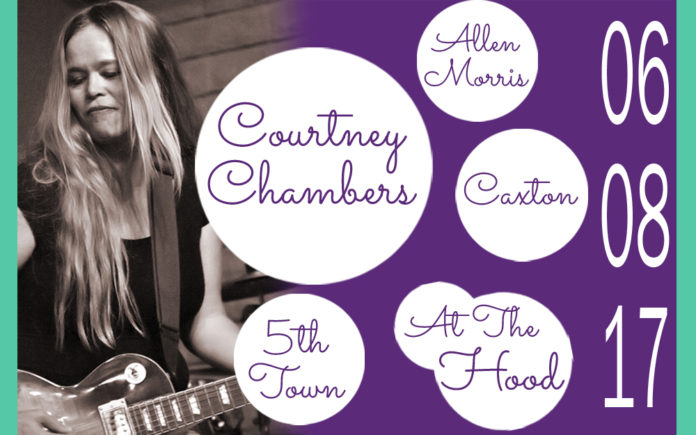 Every once in a while the desert hosts a live music event that should not be missed and supersedes any other. This Thursday, June 8, 2017 at The Hood Bar & Pizza is one of those nights. Courtney Chambers, a 2017 Coachella Valley Music Award Nominee for ‘Best Female Vocalist’ and ‘Best Front Woman,’ will be releasing her album, Courtney Chambers LIVE. The full-length release was recorded at CVMA ‘Best Live Performance Venue Nominee’ Tack Room Tavern at the Empire Polo Grounds in Indio, CA on 10/1/16 by Jeff Mazer and Wandering Star Recording Studio in Costa Mesa, CA on 12/4/16. The album was engineered by Bobby Byrnes and mixed and mastered by her go-to Sean Hoffman. In celebrating her release, she has summoned the support of Caxton, ‘Best Band’ & ‘Best Alternative Rock Band’ nominee, 5th Town, ‘Best Band’ & ‘Best Live Performance Band’ nominee and Allen Morris. This show is FREE and is 21+.

Chambers has led a crusade of support for many artists from the Coachella Valley and High Desert. She shared her admiration of the desert’s musicians, “We’re excited to play The Hood Bar & Pizza this Thursday with a couple of my favorite bands, 5th Town and Caxton. Allen Morris has amazing original music and will be showcasing his talents to start off the night. It’s a rare treat for me to be able to play with my band, so it’s extra special that I get to ‘bookend’ the tour playing with these guys.”

Chambers is that ‘night and day’ artist who continues to burst the seams of music and extend her sphere of influence across many regions. Despite the comparisons to Pat Benatar, Belinda Carlisle, Sarah McLachlan, Rickie Lee Jones and Stevie Nicks, she has refined her own brand of independent music that evokes a working class method of operation. She does it all and does it well.

Chambers formed the independent label, ‘Royal Daughter Records,’ in 2001 and went on to release four albums on her label; Imperfect Like Me (2001), Higher Places (2004), Bigger and Brighter (2007) & Tales of the Aftermath (2015). In 2005, she united with Hoffman (American Music Club, Bedroom Walls) as producer and hasn’t looked back.

Chambers’ live performances are where her enchantment exists. She is celebrated for her compelling, soulful vocals and is prepared to continue to deliver organic and genuine emotion throughout her tour. Coachella Valley Weekly looks forward to seeing you at CVMA ‘Best Live Performance Venue’ Nominee The Hood Bar & Pizza this Thursday evening to send-off Courtney Chambers and Allen Morris on their ‘Up To No Good Tour’.

Here are the dates for her ‘Up To No Good Tour’: