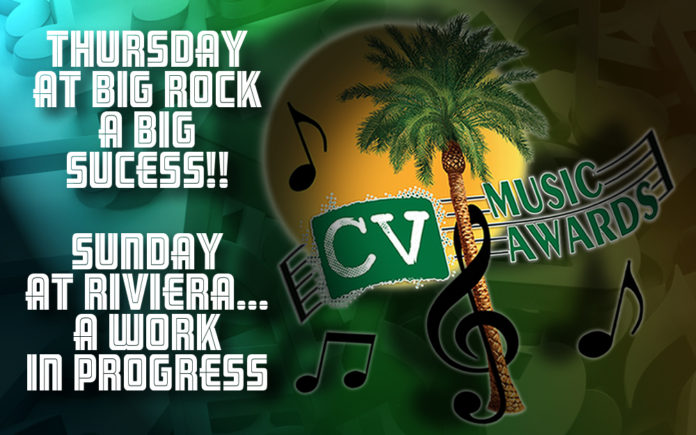 Sometimes even the most impeccable planning cannot be saved from disaster. However, we all know what to do when life gives you lemons. Certainly in the case of the CV Music Awards Event at The Riviera in Palm Springs on Sunday, the air was bittersweet as a power outage and subsequent building evacuation led to a call to reschedule. “The CV Music Awards is a wonderful night for the music community to get dressed up and come together,” states Toni Bakal, station manager for KCOD Coachella FM. “I am really happy Tracy and Phil do this for the Coachella Valley. Even though the event was cut short, I had a really great time talking to bands and artists and seeing everyone together is such an awesome experience, and it still made for a really special night. I’m looking forward to the rescheduled event and thanks to Tracy and Phil for bringing everyone together.”

The Coachella Valley Music Awards, the only awards show for locals by locals, began Sunday evening with an incredible collaborative performance by several female nominees commanding the stage, and followed then by an upbeat, catchy original song performed by popular acclaimed band, The Flusters. Then Best Cover Band was awarded to Long Duk Dong, Best New Band to Drop Mob, Best Music Venue was awarded to both The Date Shed and Pappy & Harriett’s, Best Event Promoter was announced as BB Ingle.

Warm cheers from the crowd then subsided as Lisa & The Gents began an intimate and beautifully haunting melody. With Eric Frankson on fiddle and Kerry Rose on upright bass, Lisa Lynn belted out passionate lyrics, moving the crowd. “Everything was going great,” recounts Brett Mc Laughlin who was awarded Best Bass Player at the pre awards ceremony the previous Thursday at Big Rock Pub. “Then my friend Brian said that he saw the lights flicker. Then a few seconds later the whole place went black.”

Seconds rolled by as everyone looked at each other, peering through the darkness. “I was really enjoying Lisa Lynn Morgan’s performance when the power went out,” says TK, program director at 93.7 KCLB and a Host of the CV Music Awards. Suddenly whistles from the audience and claps in support filled the dark space. Another Host, Bradley Ryan from Mix 100.5 ran to the stage to light the songstress with his cell phone in a display of quick thinking and professionalism. “It was one of those moments where you are left with nothing but your instincts,” touts Lisa Lynn Morgan. “Fortunately, I also had the support of two great musicians on acoustic instruments and a whole lot of love from the audience. Ironically, I had just produced a seminar for the kids at AMP (Academy of Musical Performance) on stage presence. We had just talked about things going wrong on stage and how to handle it. They were there sitting in front of me with their phones all lit up. I couldn’t let them down. Then I heard Brandon Ray Henderson, the stage manager whisper, ‘Sing,’ and it was on. I have never sung to such a quiet and attentive audience. They were the heroes…they gave me and the guys an opportunity to shine in the dark, and I know they will do the same for Tracy and the rescheduled music awards show.”

With the lights out and a break announced, the bar line grew and guests mingled inside and out, discussing the rumored causes of the outage and the depth of its reach across a few known blocks. A short time later, threats of a possible gas leak sent everyone outside in a mandatory evacuation. “The night seemed surreal,” remembers Ronnie King, legendary music producer and recipient of the Pioneer Award, which he was supposed to be honored with right after Lisa’s performance. “Like when you spill a glass of red wine over a white carpet and you are trying to catch it… lights out, gas leak, evacuation.”

However, the confusion as how bands could retrieve their massive amounts of equipment from inside the building turned to selfies with friends and colleagues, and chats about recent gigs. “As heartbreaking as it was to see the tears in Tracy’s eyes I’m sure there’s a silver lining,” claims Derek Jordan Gregg, frontman of celebrated band, The Hive Minds and nominated for multiple awards that evening. “The power of the local music scene banding together is more important than who was nominated or who won what award. We’re all here for each other and I know we’re all going to be there for her and Phil. We’ll all show up again whenever we get a new date figured out.”

Tracy Dietlin and Phil Lacombe owners of CV Weekly announced that the Coachella Valley Music Awards night would have to be rescheduled. After many hugs and handshakes, attendees kept in the spirit and created their own after parties, posting on social media that they were headed to dance the night away at The Red Barn, Karaoke at Plan B Live Entertainment & Cocktails, and jam out at The Palm Canyon Roadhouse, with at least a hundred people going to Big Rock Pub.

The show must go on and if ever there was a crowd of people who get that phrase, it would be this group of supportive and creative musical souls. “These were circumstances beyond anyone’s control,” says Courtney Chambers, acclaimed singer/songwriter who sang in collaboration with the other nominated females to kick off the show, “but everyone handled it like champs. As usual, our music community came together to make the best out of an unfortunate incident.”

As with any event there were several out of pocket expenses for sound, lighting, production, security, etc., and while Tracy and Phil work to organize an entire new event, our music community has already begun to help raise funds with overwhelming support. Please see the following link with more details on how you can help: www.generosity.com/community-fundraising/cv-music-awards-take-2.

Even though the Main awards show at The Riviera had to be cancelled due to the power outage and evacuation, the Pre party awards ceremony at Big Rock Pub ran smooth as silk. Attendees enjoyed awesome performances by Gina Carey, Keisha D, Mikey Reyes & Bryanna Evaro, Derek Jordan Gregg, Eevaan Tre, Minor Emergency and Mark Gregg.

We would like to thank all of our sponsors especially our Title sponsors Big Rock Pub, Renova Solar and 93.7 KCLB, who did a live on air feed throughout the first part of the night with TK. I also want to thank PSA Organica, DarMar Trophies, Bryson Backline Studio and Desertwraps.

Even though we only got through the first 35 minutes of the show at The Riviera I would still like to thank sponsors that would have made the VIP after party amazing, and still will, when we have our rescheduled date: Vektor Vodka, Babe’s Brewhouse, LULU California Bistro, Just Tapas, Giuseppe’s Pizza & Pasta and SIR.

Big thank you to Brandon Henderson, our stage & Production Manager for running both events; as well as Alaina Majiros, Cindy Hewitson and Domingo Winstead for handling ticket sales and check ins; our security team Doobie Dueber, Travis Flynn and Brandon Ruiz; Brian Champagne and Johnny Sugarbritches from AVSU; Robert Chance for the screen graphics; Laura Hunt Little for step & repeat photos; Chris Miller and John Charles Fajardo for live photo shots; Jason Hall and Billy Westley my assistants; our emcee for the 35 minutes at The Riviera, Bradley Ryan from Mix 100.5; and Morgan James and Todd “TK” Killiam from 93.7KCLB who would have hosted the second part of the main awards.

I would like to give a shout out to all the ladies who performed the opening number, Lady Gaga’s “Million Reasons,” at The Riviera: Courtney Chambers, Linda Lemke Heinz, Lisa Lynn Morgan, Chelsea Sugarbritches, Esther Sanchez, Kelly Derrickson, Symara Stone, Katie Zapcart, Bri Cherry, Ali Saenz, Jen Corradi and Sepultura Moon. You all sounded amazing and I am forever grateful for all the time you spent rehearsing to make my vision come to fruition. They were followed by a great performance by The Flusters (nominated in 7 categories) and then Lisa Lynn Morgan (nominated in 4 categories) was delivering a heartfelt performance when the power went out. We were off to an amazing start. Even before the awards began we were entertained by Herbert in the back of the room and Katie Zapcart and Bri Cherry doing an instrumental jam.

We did get to give out a few awards such as: “Best New Band” – Drop Mob/ “Best Cover Band” – Long Duk Dong/ “Best Live Performance Venue” – (tie) Date Shed & Pappy & Harriet’s/ “Best Event Promoter” – BB Ingle. Congratulations to all of you.

After things went to hell in a hand basket and we got everything tore down, close to 200 people went to Big Rock Pub. Thank you to owner Ken Hanna for allowing us to have some of the bands slated to perform get a chance to still play at your venue and to Lisa Morgan for setting it up. Getting to hear 5th Town, Long Duk Dong, Faults of Andreas, Mighty Jack and Death in Pretty Wrapping, definitely helped take the sting out of the night’s disaster.

It’s been a really emotional couple of days for me and Phil. The thought of having to reschedule and do the Awards show all over again has been a bit overwhelming. However, there has been so much love and support from all of the bands and musicians and the community as a whole has been amazing, which has made me very determined to give you all the amazing awards show that you all deserve. I’ve been working diligently the last couple days on rescheduling the event. It’s been a bit like herding kittens, trying to find a date that my whole sound, lighting, production, security team and staff can all do, not to mention a date that all of my “Special awards” recipients all have available and hopefully all the bands slated to perform will be able to do the new date as well. We are looking at two different Sunday’s in July to get everyone on the same page, but I won’t know from all of my team until possibly Thursday of this week. As soon as we are solid I will announce the new date.  There’s so much to still figure out but please know that I am committed to finish what I started for this music community. As I’m sure you all know this awards show is expensive to produce and now we have to pay for all of the above twice so we also need a little time to gather the funds to make it happen. I would like to thank Morgan James and TK from 93.7 KCLB for starting the Generosity Fundraiser campaign to help pay for the redo. I am extremely grateful to them and to everyone who has donated. This has been a bit difficult for me to accept money in this way from people, but it’s the only way to make it happen again and I appreciate each and every one of you. We have an amazing music community here and you all have made an extremely difficult situation more bearable. Much love to you all from Phil and Tracy #Phacy.